Home » Lifestyle » Earth, Venus and Mars may have formed from tiny particles of ice

Water worlds: Earth, Venus and Mars may have formed from tiny particles of ice and are among millions of ‘aquatic planets’ in the Milky Way that could be teeming with ALIEN life, scientists say

The Milky Way could be full of rocky worlds covered in water oceans and continents similar to the Earth – raising the possibility the galaxy is teeming with alien life, study claims.

All rocky planets within the galaxy could have the same building blocks as Earth at their core, originally forming from tiny particles of ice and carbon, according to researchers from the GLOBE Institute at the University of Copenhagen.

For a planet to have life – as we know it – liquid water has to be present, but current theories suggest it arrived on Earth by chance from a distant icy comet.

Now, Danish scientists say the water was there from the start, and the same applies to Venus and Mars – both of which may have had surface water in the distant past.

Using a computer model, Anders Johansen and his team calculated that a planet around a young star could start forming from ice pebbles after about 5 million years.

The study indicates that it was millimetre-sized dust particles of ice and carbon – which are known to orbit around all young stars in the Milky Way – that 4.5 billion years ago accreted in the formation of what would later become Earth. 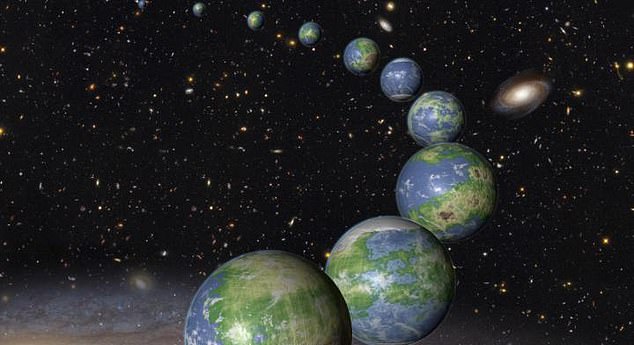 All rocky planets within the galaxy could have the same building blocks as Earth at their core – originally forming from tiny particles of ice and carbon, according to researchers from the GLOBE Institute at the University of Copenhagen 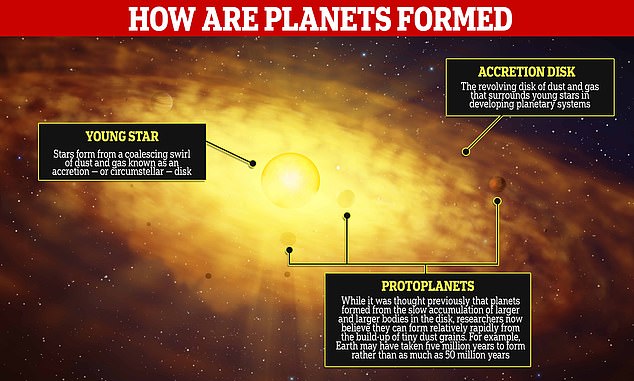 This isn’t the first study to suggest that Earth may have formed quickly from the build up of small particles, but is the first to suggest these particles were ice and carbon, contributing to the arrival of all water on Earth – and other terrestrial planets

This is a process that sees terrestrial planets form from tiny millimetre sized pieces of ice and carbon.

It happens around the water ice line in the protoplanetary disc that forms around a young star.

This is between the current orbits of Earth and Mars, researchers found.

About five million years after the star first forms the terrestrial planets begin to come together from collections of these tiny pebbles.

Earth reached 60% of its current mass at about five million years after the protoplanetary disc began to dissipate, they found.

The model is an alternative to the leading theory that collisions from planetary embryos led to full size planets we know today.

‘All our data suggest that water was part of Earth’s building blocks, right from the beginning, said Professor Johansen, adding that the decisive point for whether liquid water is present is the distance of the planet from its star.

‘And because the water molecule is frequently occurring, there is a reasonable probability that it applies to all planets in the Milky Way,’ he added.

The theory, called ‘pebble accretion’, is that planets are formed by pebbles that are clumping together, and that the planets then grow larger and larger.

‘Up to the point where Earth had grown to 1% of its current mass, our planet grew by capturing masses of pebbles filled with ice and carbon,’ said Johansen.

Earth then grew faster and faster until, after five million years, it became as large as we know it today – along the way, the temperature on the surface rose sharply.

The ice in the pebbles started to evaporate on the way down to the surface as it heated up – so that, today, only 0.1% of the planet is made up of water, even though 70% of Earth’s surface is covered by water, the authors explained.

Johansen and his team put forward the theory of pebble accretion a decade ago and believe this new study confirms their initial idea.

The water molecule H2O is found everywhere in our galaxy, and this theory therefore opens up the possibility that other planets may have been formed in the same way as Earth, Mars and Venus, Johansen speculated.

‘All planets in the Milky Way may be formed by the same building blocks, meaning that planets with the same amount of water and carbon as Earth,’ Johansen said.

‘Thus potential places where life may be present – occur frequently around other stars in our galaxy, provided the temperature is right’, he says.

If planets in our galaxy had the same building blocks and the same temperature conditions as Earth, there will also be good chances that they may have about the same amount of water and continents as our planet, the authors believe.

Professor Martin Bizzarro, co-author of the study, says their new model shows that all planets get the same amount of water when they first form around a star. 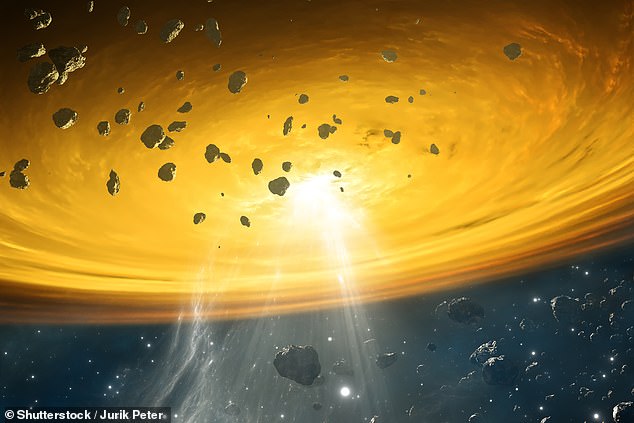 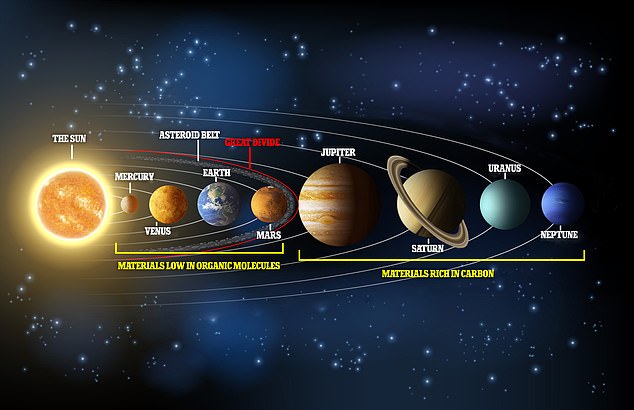 There is a ‘great divide’ in the solar system between the gas and ice giants at the outer edge and the terrestrial worlds closer to the Sun. Researchers from Copenhagen believe terrestrial planets likely formed from an ‘ice wall’ just before this great divide

If, on the other hand, it was random how much water was present on planets, the planets might look vastly different. Some planets would be too dry to develop life, while others would be completely covered by water.

‘A planet covered by water would of course be good for maritime beings, but would offer less than ideal conditions for the formation of civilisations that can observe the universe’, says Johansen.

Johansen and his research team are looking forward to the next generation of space telescopes, which will offer far better opportunities to observe exoplanets orbiting a star other than the Sun, and even planets currently being formed.

‘The new telescopes are powerful. They use spectroscopy, which means that by observing which type of light is being blocked from the planets’ orbit around their star, you can see how much water vapour there is. It can tell us something about the number of oceans on that planet’, he says.

How important is the presence of liquid water?

It is now widely believed that Mars holds a reasonably large volume of water.

However, the surface of the planet is so cold, this water exists only as ice.

In order for life to exist on a planet, many scientists believe it is essential for the world to possess liquid water.

Ever since technology has enabled mankind to gaze at Mars in detail, humans have been looking for indications that there was water on the red planet.

Did water used to flow on the surface of Mars?

The Mariner 9 mission revealed clues of water erosion in river beds and canyons, as well as evidence of weather fronts and fogs on Mars in 1971.

Later missions from the Viking orbiters, which first launched in 1975, revealed yet more details about how water flowed on the surface and carved valleys.

It was claimed the gullies seen on the surface of the planet had to have been formed by flowing water.

Scientists cited the debris and mud deposits left behind as evidence for moving water existing at some point in the history of the red planet.

However, the formation of these gullies has been hotly debated throughout the ensuing years.

Proof of ice in geological samples from Mars

Spirit and Opportunity, the twin rovers, found evidence of the presence of water enclosed in rock in 2007, when one of Spirit’s wheels broke and gorged a piece of stone.

Analysis of the silica-rich layer discovered in the scratch suggested it formed in the presence of liquid water.

In 2008, the Phoenix lander was gathering geological samples, and they disappeared after a few days.

Scientists thought these were pieces of ice. This assessment was confirmed when the lander later detected water vapour in a sample.

In 2012, Curiosity was meandering over an ancient martian seabed when it examined a number of rocks that were exposed to liquid water billions of years ago.

In 2012, Curiosity (pictured) was meandering over an ancient martian seabed when it examined a number of rocks that were exposed to liquid water billions of years ago

These dark streaks populate the areas of Mars with a sharp incline.

Researchers speculated that these may have been caused by the intermittent flow of liquid water down steep banks on the planet.

In June 2013, Curiosity found powerful evidence that water good enough to drink once flowed on Mars. In September of the same year, the first scoop of soil analysed by Curiosity revealed that fine materials on the surface of the planet contain two per cent water by weight.

In 2015, Nasa claimed to have discovered the first evidence of liquid water on Mars in the present day.

The space agency said that its Mars Reconnaissance Orbiter (MRO) provided the strongest evidence yet that liquid water flows intermittently on present-day Mars.

In 2017, Nasa issued another statement rebuking its initial findings.

Features known as recurring slope lineae (RSL) were first identified in 2011 (pictured). These dark streaks populate the areas of Mars with a sharp incline. Researchers speculated that these may have been caused by the intermittent flow of liquid water

It said the dark features that run down steep inclines on the red planet were actually granular flows, where grains of sand and dust slip downhill to make dark streaks, rather than the ground being darkened by seeping water.

Images from the MRO revealed the streaks only exist on slopes steep enough for dry grains to descend the way they do on faces of active dunes.

Also in 2017, scientists provided the best estimates for water on Mars, claiming it once had more liquid H2O than the Arctic Ocean – and the planet kept these oceans for more than 1.5 billion years.

The findings suggest there was ample time and water for life on Mars to thrive, but over the last 3.7 billion years the red planet has lost 87 per cent of its water – leaving the surface barren and dry.

In a study published in the journal Science, ESO researchers have now discovered the first concrete evidence for liquid water on Mars.