Veteran equestrian rider Andrew Hoy has been selected in the Australian team for the Tokyo Olympics, which will bring to eight the number of Games at which he has competed.

In the 125-year history of the Olympic movement, only three athletes have participated at more Games. Hoy will be a short-priced favourite to carry the Australian flag at the opening ceremony. 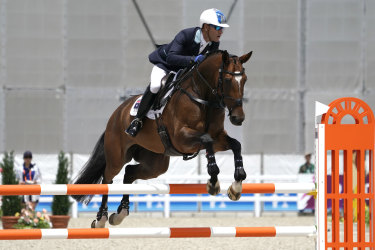 Andrew Hoy competes at a pre-Olympics test event at Tokyo in 2019.Credit:Getty

Hoy was fourth individually on Vassily de Lassos at the most recent world championships in Tryon, USA (2018). The duo finished third at the highly competitive Luhmuhlen Horse Trials in Germany last weekend. First and second were two Germans who will be part of their team for Tokyo.

Hoy will be joined in the Australian team by:

Stuart Tinney and Leporis will be the travelling reserve/ alternate combination. Tinney was a member of the gold medal team at Sydney and the bronze medal Rio team.

The eventing competition at Tokyo will be contested under a new format and even the experts are unsure how it will play out. Selectors have therefore placed considerable importance on reliability.

Previously, four riders competed on a team and the best three scores counted. In Tokyo, only three will compete and all scores count, with no “drop score.” In a sport with so much variability, especially on the cross country section, selectors have opted for experience.

Hoy also won an individual silver medal at the Sydney Olympics. Based in England, he recently became a father for the first time. He has two children with second wife, Steffi.

His longevity both in his sport and awaiting fatherhood has made him an inveterate record holder. Hoy’s first wife, Bettina, represented Germany and they are the only married couple to ever compete against each other in different teams for the same Olympic medal.

Sports news, results and expert commentary. Sign up for our Sport newsletter.

Most Viewed in Sport

Rafael Alves misses weight by almost a FULL STONE in UFC record as he tips scales 11.5lb over featherweight limit