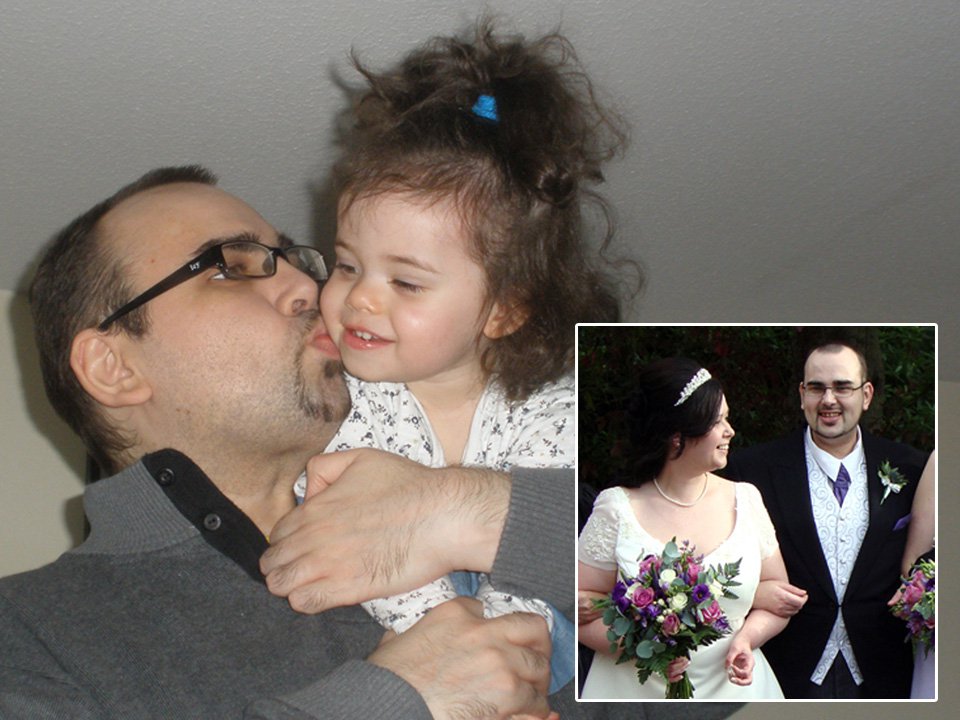 A man who fractured his spine falling down a flight of stairs leaving him in constant pain says he wouldn’t change what happened – as his injury led to him finding the love of his life.

Ross Fraser, 42, from Stonehaven, Scotland, met Jennifer, 45, by chance when they were both undergoing physiotherapy.

Ross had suffered a fractured spine from falling down a flight of stairs in June 2007 and spoke to Jennifer, who had hurt her wrist due to a rare condition, on an online chatroom.

The pair hit it off and after a whirlwind romance were engaged just 10 weeks after meeting. Now, Ross and Jennifer are married and parents to nine-year-old Megan.

‘If someone gave me the choice right now, to not have the pain but I wouldn’t have my wife and daughter or things can happen as they happened, I wouldn’t change it,’ says Ross.

‘It’s not to say I’m happy for the accident, but I’m happy I met Jenny when I did because she changed my entire world. She found me at the worst time in my life and gave me something to fight for.

‘When I look back and see all the dominoes that had to fall one after the other to ensure we both met that night, I find it hard to deny the existence of fate, even though I would have sworn blindly that it didn’t exist before that day.’

Ross, a former baker, said his ordeal with chronic pain began on June 28th, 2007, when aged 28, he slipped on a wet step as he went down the outdoor stairs at work.

He adds: ‘It had been raining all day and I slipped on the step, literally my foot was in front of my face and the thought went through my head of, “this isn’t going to be good.”

‘I hit the back of my neck on the top step and my bum on like three or four steps down at the same time.’

Rushed to Jubilee Hospital, doctors broke the news to Ross that he had fractured his spine, explaining he has suffered a compound wedge fracture on the third and fourth vertebrae of his spine, in the lumbar region.

‘Doctors said it was like grabbing a stick at both ends and putting pressure on it, basically that’s what happened to my spine,’ he explains.

‘I was shocked but I don’t think I realised just how serious it was at first. My family was up in Inverness while I was living in Huntly so I was trying to deal with this myself and I couldn’t cope.

‘I tried to go back to work at first, two weeks after the fall. Before the accident, it probably took me about two or three minutes to walk from my house to work. Afterwards, it was taking me sometimes an hour to get there.

‘I couldn’t look after myself so I was put into a retirement home for a couple of days, then my mum came down to help. They ended up taking me back to Inverness and I was there for a good couple of months.’

It was while he was in Inverness that Ross found an online chat service to talk to other people while he was suffering pain from his injury.

The site paired him at random with Jennifer, who was living in Aberdeen.

‘I found that I could just be open with Jenny and be myself. We were both looking for someone to talk to but I don’t think either of us expected to find someone we’d fall for.’

At the time, Jennifer was recovering from a wrist operation to resolve an injury due to Madelung’s Deformity, a rare congenital condition in which the wrist grows abnormally.

‘We were talking daily and after two weeks we met up face to face when she came to visit me in Huntly,’ says Ross.

‘We went to a chip shop and watched a film back at mine. We had already been talking non-stop so it just felt like we knew each other.

‘I actually wanted to propose after a fortnight but it was 10 weeks after we first met that I brought Jenny back to Inverness for a few days when I asked her to marry me.

‘It’s been 14 years now and I couldn’t think of anyone else I’d rather be with.’

Tying the knot in 2009, the couple now have a daughter, Megan, nine, and Jennifer’s wrist is healed but Ross still suffers daily pain as a result of his back injury.

‘Anything can trigger it. I was walking down the street one day and I remember turning to my friend and said, ‘something’s killing my back.’ I didn’t know what it was but I turned around and there was a kid coming round the corner on a scooter, and I’d been feeling the vibrations.

‘Just this morning, I woke up looking for my daughter because I thought she was kicking a football around the bedroom. It turned out it was actually cleaners in the downstairs flat. I was feeling the vibrations through the walls. It’s insane at times, and all of this causes a lot of pain.’

Jennifer and Ross took Megan on two trips to Disneyland Paris in 2016 and 2018 but he fears they may be the only holidays they will have abroad.

‘It’s getting worse,’ Ross adds. ‘And there is going to be a time where I’ll be stuck, if not in the house permanently then in bed permanently.

‘Everything hurt and I didn’t sleep for days on those trips but I did it all for my daughter. I wanted her to have some holiday photos to look back on.

‘All of the rides hurt, it didn’t matter which ride it was, but I don’t regret any of it, it was special for Megan.

‘My life is like living on a roller coaster. I have good days but I know a down is coming at some point, I can’t control that.

‘I can’t make every day a good day, it’s not possible, but I like to make sure the good days count.’

Now, Ross is unable to work and while Jennifer supports the family working as a healthcare support worker, Ross is hoping to become a children’s author.

‘It’s something I can do at home and I want to be able to provide an income for the house,’ he says.

‘I met Jen after the accident so I’ve never been able to do that. I’m old-fashioned, I have a strong work ethic and it’s hell.

‘But it’s more than just returning to work, I want to do it for my Megan. It’s given me a new lease of life recently and I’d love to keep a hold of that.’

Ross has set up a gofundme page to support his dream of publishing a children’s book.

Do you have a story to share? We want to hear from you.

Get in touch: [email protected]