A cash flow boost could be offered to small business owners in a federal plan to help companies survive extended lockdowns, reprising a measure that paid up to $100,000 to employers last year.

Prime Minister Scott Morrison named the payment as one of the most effective measures used in the first wave of the pandemic last year, signalling it could be used again. 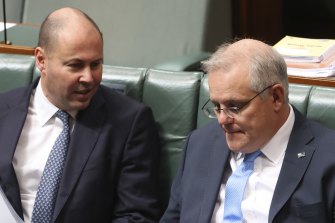 Treasurer Josh Frydenberg and Prime Minister Scott Morrison have been in talks with NSW leaders about the cash flow package.Credit:Alex Ellinghausen

Changes are also on the agenda to make it easier for people to receive income support through the COVID-19 Disaster Payment, which is worth up to $500 per week and paid directly to individuals.

Mr Morrison is discussing the federal package with NSW Premier Gladys Berejiklian in the hope of announcing the details as soon as Tuesday, subject to work by federal and state officials on Monday night.

While it will be offered to companies in the greater Sydney area at first, given they are being forced to close, it will be available on the same terms to employers in other regions, states and territories that suffer extended lockdowns that last for more than two weeks.

Mr Morrison said he and Treasurer Josh Frydenberg were “pretty close” to finalising the package in talks with Ms Berejiklian and NSW Treasurer Dominic Perrottet.

“What we learned last year when the pandemic hit is we had some very clear principles that really guided how we directed that economic support so it was maximum effect,” Mr Morrison said on Monday.

“One of the most effective measures, in addition to the income support, was the cash flow boost that was put in place.

“In NSW alone that injected more than $10 billion directly from the Commonwealth government to support NSW businesses.

“That was a very effective measure, because it gave business a lot of confidence.”

The federal government offered payments ranging from $20,000 to $100,000 to small and medium businesses in March last year as a “cash flow boost” so employers could pay staff and bills.

The payment was calculated as a proportion of a company’s tax withholdings for salary and wages in the belief it would act as an incentive to retain staff. It was free of tax, did not require new application forms and was paid through the Australian Taxation Office.

While the government followed the cash flow boost with the larger JobKeeper scheme within weeks, federal ministers have been adamant the wage subsidy will not be reinstated after running for a full year at a cost of about $90 billion.

Rather than paying a wage subsidy through the tax system, the government will rely on the COVID-19 Disaster Payment, which is paid through Centrelink for those who apply online each week.

Those who have lost fewer than 20 hours of work each week can receive $325 while those who lose more hours can receive $500 per week.

Mr Morrison confirmed on Monday the increase in federal assistance was on the way but he said the details were subject to work by officials and discussions with Ms Berejiklian.

“This is what we’ve been working through since last Wednesday when the Premier contacted me and indicated that this lockdown and the progression of the virus and the outbreak here in NSW was really moving into a completely different phase,” he said.

“They’re now facing perhaps closing their doors permanently so, any assistance from the federal government or from the NSW government for businesses, and for livelihoods for people who are working … can’t come soon enough,” Ms Plibersek said.

“People are really struggling and that’s one of the reasons that they go out. It’s to actually earn a buck because they have to feed their families.”

Princess Diana Once Revealed What the Days Leading Up to Her Wedding Were Really Like: 'I Sobbed My Eyes Out'