Swimming’s under-fire world governing body will entertain stripping Sun Yang of his gold medals from last year’s world championships, according to FINA vice-president Matt Dunn, but any decision would have to wait until after the disgraced Chinese superstar has a final appeal heard by the Swiss federal court.

Sun, 28, was on Friday suspended for eight years by the Lausanne-based Court of Arbitration for Sport, which found the freestyler guilty of a second doping offence after the World Anti-Doping Agency appealed the original ruling of FINA’s doping panel. 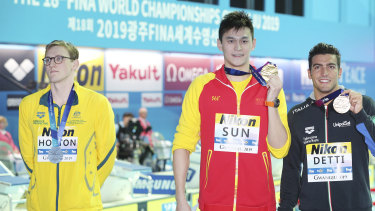 “I’ll have to convene with the FINA executive but my personal opinion is we’ll likely have to wait until any avenue of appeal is completed,” Dunn told The Sydney Morning Herald and The Age on Sunday.

“I think the option [of stripping Sun of his medals] will be open. We supported the judgment of the FINA doping panel, and consequently we support the decision of the CAS. Really we wean to ensure the WADA code is enforced as best we can in order to ensure a drug-free playing field for clean athletes.

“From FINA’s perspective the importance is to have a drug-free sport. As an ex-member of the WADA athlete committee I’m very committed to that. We have to ensure our procedures are as robust as possible to ensure our sport is clean and all athletes are protected.”

Dunn’s comments came as Sun’s Beijing lawyer, Zhang Qihuai, on the weekend slammed the CAS’s overturning of the decision by the FINA doping panel and indicated the swimmer would sue a doping tester who gave “false evidence”.

“February 28, 2020 was a dark day. It shows the scene where evil defeats justice and power replaces self-evident truths,” Beijing-based lawyer Zhang Qihuai said in a statement.

FINA, whose executive director Cornel Marculescu has been described by Sun as “like a grandfather” to him, has come under renewed attack following the eight-year ban slapped on the swimmer by the CAS.

Prior to that suspension being announced on Friday, the Associated Press reported that FINA had backed Sun’s lawyers in attempting to have the WADA appeal to the CAS dismissed, claiming WADA’s lead counsel, Richard Young, had a conflict of interest because he’d previously been on FINA’s legal commission.

The decision to clear Sun last year was made by a FINA doping panel comprising of David Lech, the general counsel for the Canadian Centre for Ethics in Sport, Swiss lawyer Robert Fox and Farid Ben Belkacem of Algeria.

Expert shares tips for having sex that actually feels good