Victoria has a new coronavirus police squad, with 500 officers given powers to arrest and detain people flouting self-isolation rules and crack down on unlawful gatherings.

On Monday, Police Minister Lisa Neville said the coronavirus enforcement squad was formed after officers carrying out spot checks on the weekend found people were failing to comply with isolation and social-distancing measures.

The new squad is large by state police standards. In contrast, last year about 130 police officers and public servants were deployed at counter-terrorism command, and about 85 personnel were in family violence command, with another 415 non-command level officers in family violence operations around the state.

The new police squad will doorknock those who are in self-isolation and respond to reports of any non-essential gatherings which don’t adhere to restrictions. 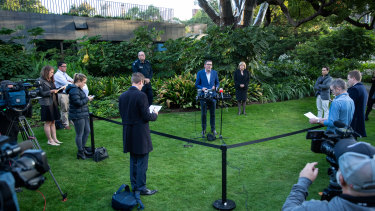 Victoria Police is yet to release specific details about how the squad will operate or whether it will be focusing patrols on specific areas.

A spokesman said they would not be providing breakdowns of how many police in the taskforce will be working in specific suburbs or regions, but confirmed the officers will be working across the state.

Under Victoria's Public Health and Wellbeing Act 2008, if a state of emergency has been declared, the Chief Health Officer can appoint authorised officers – the police – to use public health risk and emergency powers.

These include the power to detain or restrict the movement of a person or group in the emergency area in order to eliminate or reduce a serious risk to public health.

Ms Neville said the government had hoped more people would comply with the restrictions over the weekend.

“What we saw over the weekend was quite a number of breaches in relation to the rules around indoor gatherings. That has meant as a result we are upping the ante in terms of the police engagement on this.”

In Victoria, all non-essential gatherings have been banned, as pubs, restaurants, cafes and cinemas were shut from midday on Monday.

Travellers returning from overseas are now required to self-isolate for 14 days under strict quarantine measures.

Anyone who fails to follow a public health order will face a $20,000 fine, though no one has yet been charged as a result of quarantine inspections.

"Victoria Police do not want to be out there, having to knock on people's doors. Unfortunately they have had to be and will need to be over the coming weeks," said Ms Neville.

"Be in no doubt, police have the powers, if they so believe, to find you, arrest you, detain you. They will use those powers where needed in the interest of community safety."

“We have had instances in the spot checks where people haven't been at home when they should have been at home and people that have freely said, ‘we were at home for some of the time, other times we were out shopping, out doing things'," he said.

"Clearly the message hasn't been getting through to the degree we need to see to make sure we can deal with this health emergency in the proper way."

“Follow the advice and follow the rules and what's more if you don’t, you have every reason to believe Victoria Police will catch you and you will be punished," he said.

Shaun White sells Malibu mansion at a loss for $8M