Home » Lifestyle » Fireball may have dropped a METEORITE over the UK

Last night’s record-breaking fireball may have dropped a METEORITE over the UK! Scientists release map showing likely fall locations and call on the public to help find it

A meteorite may have been dropped somewhere over the UK by a record-breaking fireball that lit up parts of the night sky on Sunday night, scientists said.

The small piece of an asteroid entered the Earth’s atmosphere at 30,000 miles per hour and may have landed on farmland just north of Cheltenham.

The meteor was spotted shortly before 10pm, creating a sonic boom across southern England, according to the UK Fireball Alliance (UKFall).

The group, led by staff at the Natural History Museum, say the bright light could be seen from Ireland to the Netherlands and was captured on video doorbells, dash cams and by observers out and about across southern England.

So many people saw the fireball that it is set to break the world record for ‘most-reported’ sightings – at 758 – on the International Meteor Organisation website. 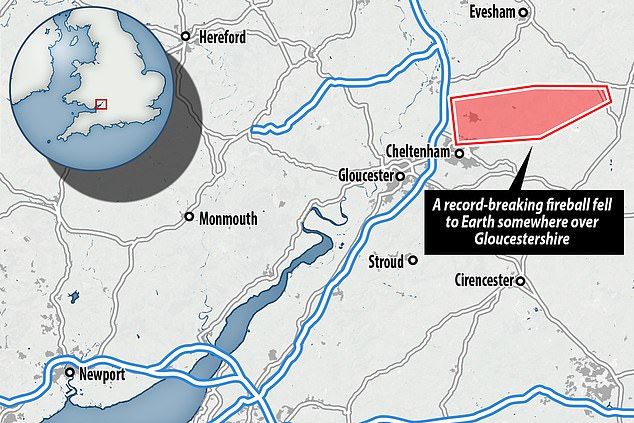 The small piece of an asteroid entered the Earth’s atmosphere at 30,000 miles per hour and may have landed on farmland just north of Cheltenham 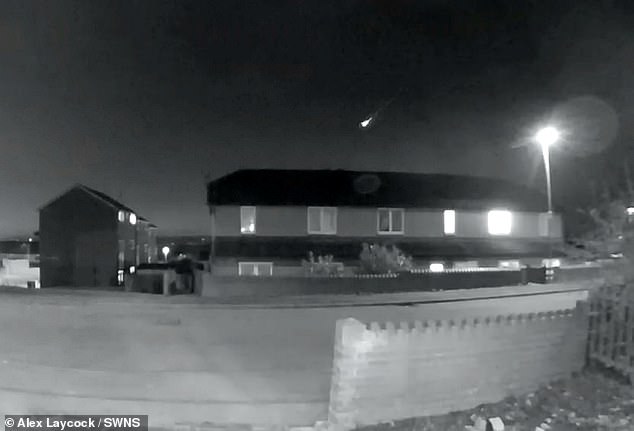 A meteorite may have been dropped somewhere over the UK by a record-breaking fireball that lit up parts of the night sky on Sunday night, scientists said

FIREBALL METEORS: FRAGMENTS OF AN ASTEROID

Sometimes known as a shooting star, a fireball meteor is a rapidly moving space rock inside Earth’s atmosphere.

According to NASA if a meteor is able to survive this burning trip and hit the ground, the rock on Earth becomes known as a meteorite.

The pieces of rock often come from asteroids that broke up due to a collision or other event.

Some have been pieces of other planets or even the Moon.

A piece of Mars rock that fell to Earth as a meteorite is on the Perseverance rover to help calibrate its equipment.

By studying different types of meteorites, scientists can learn more about asteroids, planets and other parts of our solar system.

As well as being spotted on cameras across the UK, the fireball was also recorded on at least six specialised UKFAll fireball cameras.

Dr Luke Daly of the University of Glasgow and UKFAll said the meteor fragmented a lot as it entered the Earth’s atmosphere and broke into multiple pieces.

‘Most of the meteoroid vapourised during the six seconds of visible flight. However, with this one we think quite a few fragments probably reached the ground,’ he said.

‘If pieces landed, they are likely to have been on or just north of Cheltenham, out towards Stow-on-the-Wold. So most pieces are likely to be on farm land’.

UKFAll released a map showing likely fall locations based on computer models of where it is expected to have landed – based on speed, direction and observations.

‘The video recordings tell us its speed was about 30,000 miles per hour, which is too fast for it to be human-made ‘space junk’, so it’s not an old rocket or satellite,’ said UKFall’s Dr Ashley King.

‘The videos also allowed us to reconstruct its original orbit around the sun. In this case, the orbit was like an asteroid’s.

‘This particular piece of asteroid spent most of its orbit between Mars and Jupiter, though sometimes got closer to the Sun than Earth is.’

UKFall said though the meteor fragmented in the atmosphere it is likely ‘a few fragments’ reached the ground. 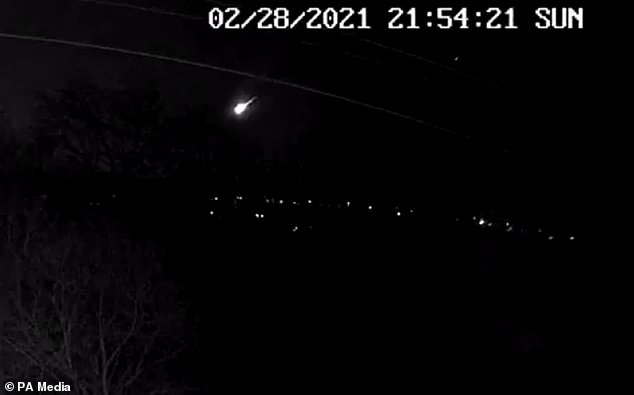 ‘If you do find a meteorite on the ground, ideally photograph it in place, note the location using your phone GPS, don’t touch it with a magnet, and, if you can, avoid touching it with your hands,’ said Dr Katherine Joy of the University of Manchester.

Sam Harris, from Leeds, said he was in bed talking to his fiancee when he witnessed the ‘breathtaking’ fireball.

‘As I looked out of the window I saw what I thought at first was a huge firework, but it was descending in an ark,’ the 28-year-old civil servant said.

‘There was a trail of orange and green and it was incredibly bright!

‘It was breathtaking… I couldn’t sleep for a few hours afterwards – I had a strange adrenaline kind of buzz!’ 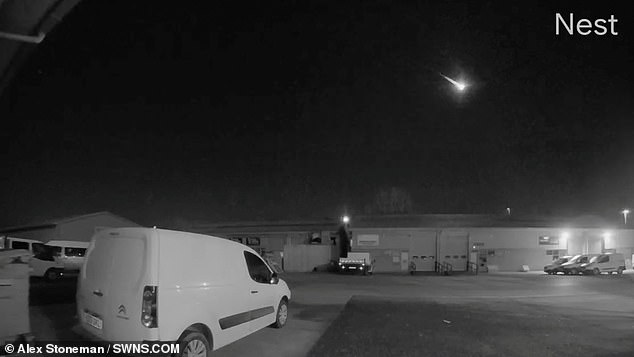 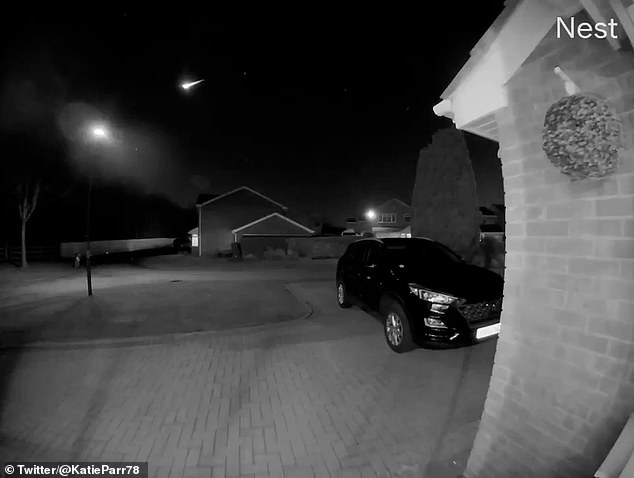 Footage captured by doorbell cameras shows the moment the meteor zooms past as a ball of light.

One viewer said: ‘I honestly couldn’t believe my eyes! Most incredible thing I’ve ever seen it was like a firework. I’m so excited!!!”

A women in the Forest of Dean in Gloucestershire said: ‘Scared all the pheasants out of the forest but a few moments before hand my partner said that were a strange light outside.’

Anyone who has a photo or video of the meteor has been encouraged to upload the photo and details to the Fireball Report to help scientists map its location. 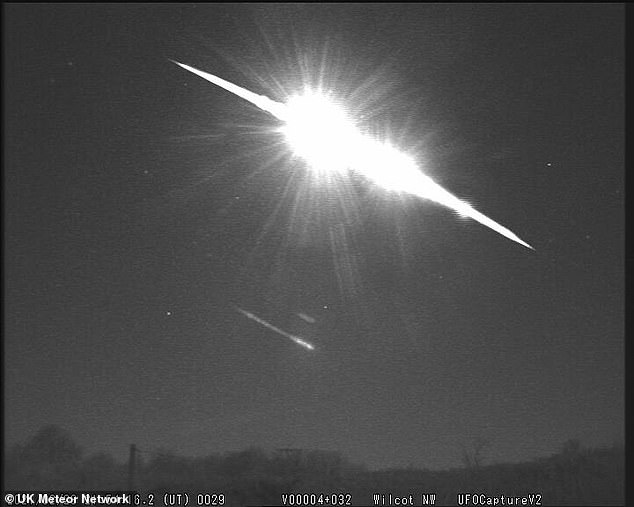 One viewer said: ‘I honestly couldn’t believe my eyes! Most incredible thing I’ve ever seen it was like a firework. I’m so excited!!!’

Explained: The difference between an asteroid, meteorite and other space rocks

An asteroid is a large chunk of rock left over from collisions or the early solar system. Most are located between Mars and Jupiter in the Main Belt.

A comet is a rock covered in ice, methane and other compounds. Their orbits take them much further out of the solar system.

A meteor is what astronomers call a flash of light in the atmosphere when debris burns up.

This debris itself is known as a meteoroid. Most are so small they are vapourised in the atmosphere.

If any of this meteoroid makes it to Earth, it is called a meteorite.

Meteors, meteoroids and meteorites normally originate from asteroids and comets.

For example, if Earth passes through the tail of a comet, much of the debris burns up in the atmosphere, forming a meteor shower.