The aspect from Prospect Hill Road puts smoke, and tears, in your eyes 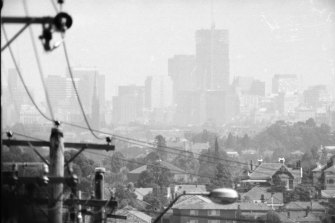 View of the smog from Prospect Hill Road in Camberwell.Credit:Nevillle Bowler

Melbourne was a ghost city from Prospect Hill Road, Camberwell yesterday as a brown chemical smog blotted out the skyline.

The haze in the picture is a mixture of smoke, industrial gases, dust and carbon fallout – all trapped under a “lid” of cold air over the city.

According to the Weather Bureau the cause – a temperature inversion 2500 feet up – will stay until Sunday. The smog will be worse today, it says.

Mr. Willman said: “This can only get worse. The solution rests with the much-vaunted Environment Protection Act and the Clean Air Act which so far appear to be toothless paper tigers.”

Mr. Willman attacked “fleabite fines” and said industries contributing to air pollution should be fined $5000 “to make them sit up and take notice.”

He said: “Until the legislation is enforced clean, fresh, breathable air is going to stay a memory for much of the time in Melbourne.”

Justin Bieber Kicks Off 2021 With New Video 'Anyone'