More than 250,000 Australians demonstrated for nuclear disarmament yesterday in marches that were bigger than the Vietnam moratorium protests of 1971. 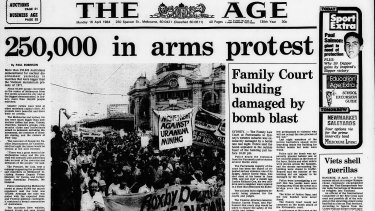 About 85,000 people converged on the centre of Melbourne from five points around the city and at the biggest demonstration, in Sydney, more than 100,000 people marched.

Smaller rallies were held at other mainland capital cities. All protests were peaceful and there were no arrests.

The Melbourne and Sydney rallies were much bigger than anti-nuclear rallies last year. Unions, churches, women’s groups, community clubs and individuals joined in demands including disarmament, the cessation of uranium mining, and the closure of Pine Gap.

The convener of People for Nuclear Disarmament, Dr. Camilleri, said last night the issues would be critical at the next election.

“There was a great mood of determination today and the protests will intensify until politicians take account of concerns and demands of the people,” he said.

Police estimated the Melbourne crowd at about 60,000 but march organisers said the total was 119,000. Although the rally was dotted with the expected State and Federal contingent, it contained a broad cross-section of Australians.

The marchers blew whistles, banged drums and sang protest songs during the march. At the mall they were treated to a mock street-theatre clash between giant puppets of the United States President, Mr. Ronald Reagan and his Soviet Union counterpart, Mr. Constantin Chernenko.

The speeches throughout the day attacked the Federal Government’s moves to soften ALP policy on the mining and export of uranium and the Prime Minister, Mr. Hawke, was dubbed “yellowcake Bob” by sections of the crowd.

A message from the Foreign Affairs Minister, Mr. Hayden, read to the rallies said the Federal Government urged the superpowers to resume as soon as possible negotiations limiting and reducing nuclear weapons.

Commenting on the peace rallies held yesterday, Mr. Hayden, claimed the nuclear arms race was the most pressing issue in the nuclear debate.

Outlining the Government’s priorities, Mr. Hayden said it had “urged both the United States and the Soviet Union to consider their prime responsibility to humanity. We believe that the current level of nuclear stockpiles must be reduced substantially.”

In Sydney, rally organisers said more than 120,000 people marched to double last year’s turnout. Ironically, the NSW police estimated a crowd of 150,000. The crowd took more than two hours to march from Hyde Park to Domain.

In Perth, up to 25,000 people urged an end to the bomb, and a group of protesters hired what they called a “peace train” from Fremantle to the city’s centre. About 5000 demonstrated in Canberra, about 10,000 in Adelaide and 10,000 in Brisbane. Many of the marchers in Queensland stopped the protest by lying down on the road as a symbolic demonstration of the effects of a nuclear war.

In Canberra, about 5000 people took part in the national protest which was coordinated by Australians for Disarmament to coincide with the Christian festival of Palm Sunday.

At the beginning of the southern arm of the Melbourne march, outside BP House in Albert Road, South Melbourne, protestors were addressed by the leader of the Australian Democrats, Senator Don Chipp.

Mr. Chipp told the protesters that there were 46,000 nuclear bombs stationed around the world and we know some of them are pointed at Australia.

“I find it very difficult to comprehend the magnitude of what these elderly politicians (Raegan and Chernenko) have done to the world,” he said.

The vice-president of the Victorian branch of the Waterside Workers Federation, Mr. Harry Bocquet, told the crowd that his union had a tradition of opposition to uranium mining and had taken on Sir Robert Menzies over the export of pig iron to Japan before World War II.

Mr. Bocquet said he saw a parallel today with the Federal Government in a veiled reference to the present Prime Minister, Mr. Bob Hawke.

“It is unfortunate but true that there is a parallel to Menzies looming on the horizon. In Canberra there is a man with a similar nickname, but perhaps of a different color,” he said.

Man proposes to his girlfriend for weeks without her noticing