Even when your parents are Gabrielle Union and Dwyane Wade, somedays you just aren’t having it.

That was the mentality of Kaavia James — the duo’s 3-year-old toddler — yesterday when Union uploaded a video of herself leaning down to give the tot a kiss, which Kaavia quickly walked away from and then immediately reached to brush off her lips. The video was shared on Kaavia’s personal Instagram page, which is managed by her parents and has already amassed nearly two million followers. Not too bad for a baby! Check out the amazing display of toddler shade, below: 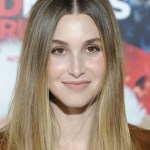 
Whitney Port Shared a Raw, Self-Care Photo To Her Instagram After Sudden Miscarriage: “One Day at a Time”

Union captioned the photo, “Monday Mood. This aint it. #ShadyBaby.” This sentiment, unlike the kiss itself, seems to be something that Kaavia would wholeheartedly agree with. Shady Baby is also the title of Union’s children’s book that came out in May 2021. The book, which Union co-authored with Wade, is based on Kaavia’s big personality and features an adorable illustration of her on the cover.

“We wanted to create a children’s book that not only had a little Black girl as the main character but to also give the word ‘shady’ a more positive association, using it as her superpower, moral compass, and inner strength,” Union told SheKnows.

While she might be shady sometimes (and aren’t we all?), Kaavia is nothing if not full of personality. About a month ago Union shared a video of the toddler, at Union’s request, blowing her a kiss and singing her happy birthday. In both of these videos, Kaavia makes it clear that while she loves her boundaries, she loves her mom more.

Before you go, check out these beautiful children’s books by Black authors & illustrators:

‘Now is the time to stay away’: Sydneysiders told to avoid regional NSW

How do I apply for a £5,000 Green Homes Grant voucher and do I qualify for one?