Home » Lifestyle » Getting the most out of your phone camera

With a little know-how, the powerful phone camera in your pocket can take professional-grade photos. Here are some tips I gleamed from taking photos of this year's Mardi Gras in Sydney over the weekend.

Two adages apply when it comes to taking event photos with your phone – “The best camera is the one you have with you” and “bad workers blame their tools”. While a professional camera set-up will usually get better results, lugging a DSLR and accompanying lenses isn't necessary for most punters. 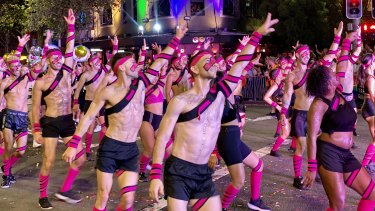 A scene from Mardi Gras 2020 in Sydney captured with a 2x optical zoom setting.Credit:Alice Clarke

When taking photos of a crowd, their awareness of you as a photographer can play an important role in your results. People behave differently when you hold up a phone compared to a camera –they’re more candid and less self-conscious in front of a phone even though they know you’re taking a photo. Also, remember to always ask for permission before you shoot.

The popular Portrait Mode (sometimes called Live Focus) automatically registers the subject and then lightly blurs the background, adding depth of field that brings your subject to the fore. For best results, a subject must stay still for a couple of seconds and preferably not be framed with too many faces the background (lest the poor phone camera try to focus on them all at once). The feature is much better for use in quieter moments.

Once limited to expensive pro cameras, ultra-wide angles are now achievable on many new phones including the iPhone 11 range, Samsung Galaxy S10 and newer, and Huawei P30. Access them by zooming out to 0.5, allowing you to see more of the scene when you can’t back up any further. 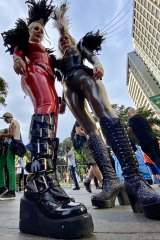 Heidi and Kylie are captured at Mardis Gras 2020 in Sydney with an ultra-wide (0.5x) zoom setting.Credit:Alice Clarke

My favourite new photo trick involves resting a phone on the ground face down and taking a snap of someone putting their foot towards the lens. Also, getting someone to point at the camera can give an excellent Phoenix Wright: Ace Attorney effect.

If there’s a lot going on in a scene and you’re not sure what to hone in on, there are a few methods to ensure you don’t miss the right frame. Most phones allow you to capture photos while you’re shooting video (and vice-versa), so you don’t have to choose. On iPhone 11, just hold your finger on the shutter button and it will switch to video (just like in the Instagram app). To maintain that function, move your finger to the picture of the lock on the right.

You now trigger this on iPhone 11 by moving you finger to the left as soon as you tap the shutter button. 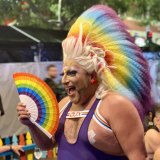 Live Photo Mode on iPhone (titled differently elsewhere) takes a 1.5-second video either side of a still, giving you both a cool effect for socials and a chance to pick the best frame for the main image afterwards.

While a digital zoom seems to add convenience, it is in fact your enemy! Some phones (the Samsung S20 Ultra, for example) sport a pretty spectacular digital zoom, but most just produce blurry shots. Sometimes it’s unavoidable but try to stick to the bounds of your phone’s optical lens – typically 0.5x, 1x and 2x.

Finally, battery management is key. On the day of Mardi Gras I used 180 per cent of my battery – eight hours of GPS, games and music, followed by eight hours of photos and videos, and subsequent posting to socials. Definitely bring a battery pack or battery case (some of which feature physical shutter buttons in handy places) so you don’t get caught out.

But most of all, have fun and enjoy the moment while you capture it.