Checkmate! Grandparents defy self-isolation to play board games with their grandchildren via video call while others get creative in the garden as country remains on lockdown

As the country faces its second day in lockdown in an effort to fight the coronavirus, many families are embracing creative new ways to keep in touch.

For the elderly, self-isolation can be a particularly difficult time – but the wonders of technology are certainly helping to ease the burden for people all over the world.

Mick Phillips, 71, enjoyed a game of chess with his seven-year-old grandson Ruben over FaceTime, ensuring the pair stay in touch during self-isolation.

Ruben’s father Chris Phillips, 42, from Codsall, Staffordshire, videoed the pair indulging in one of their favourite past times and shared it to social media. 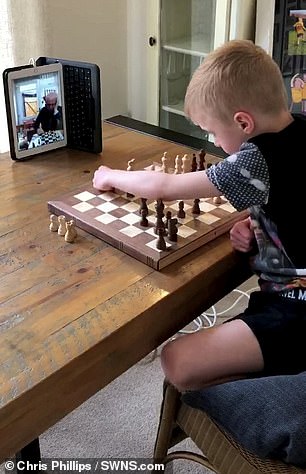 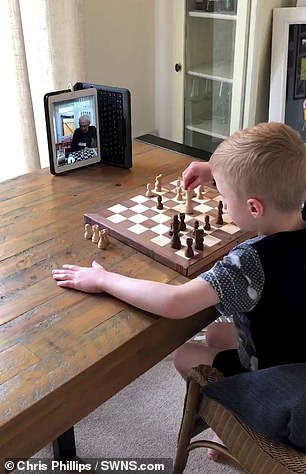 Mick Phillips, 71, enjoyed a game of chess with his seven-year-old grandson Ruben over FaceTime, ensuring the pair stay in touch during self-isolation 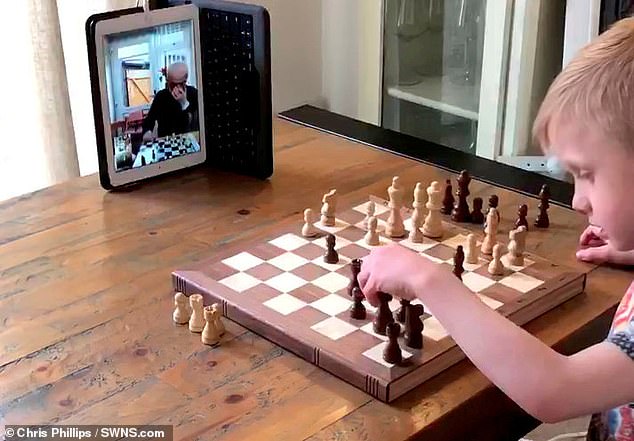 Ruben’s father Chris Phillips, 42, videoed the pair indulging in one of their favourite past times and shared it to social media

The trio would usually meet every Saturday to see their favourite football team, Wolverhampton Wanderers, which has been put on hold since the country went into lockdown.

Mick, who suffers from Parkinson’s, is in the high risk category and has been in self-isolating for more than a week. The video chat on Saturday was extra special to the family as they were also celebrating Mick’s birthday.

Chris, a data analyst, said: ‘They have always been close and when the news broke that my dad would be isolated, Ruben was really upset. He started thinking about ways he could still see his granddad.

‘It was all Ruben’s idea to set up the game and on Saturday they both set up their chess boards. The set up was tricky but they worked out a grid system, similar to battleships, and it worked.’

Meanwhile a little girl who could no longer see her ‘adopted grandad’ neighbour during self-isolation devised a way for them still to play during lockdown – by ‘sword fighting’ with bamboo over their garden wall. 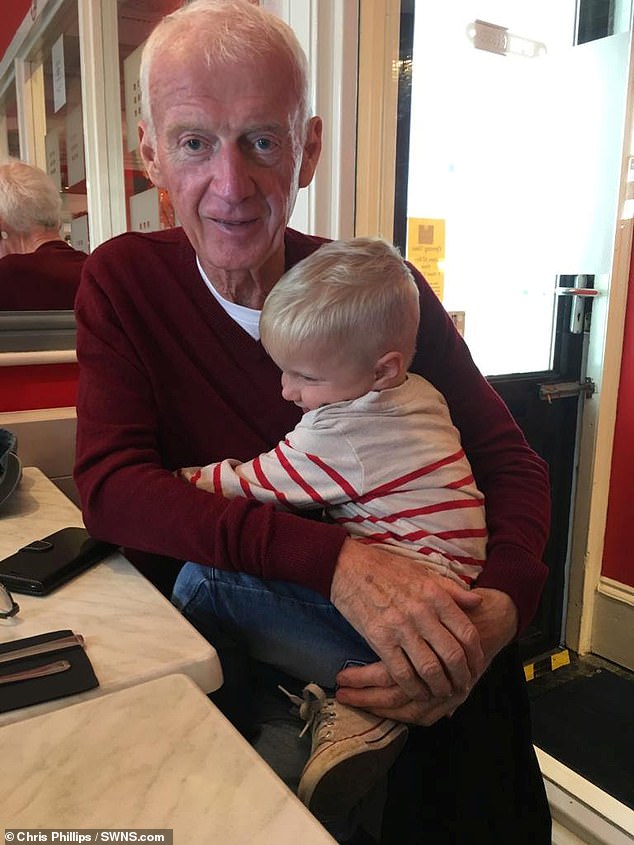 Mick Phillips, pictured holding Ruben, would usually meet with his son and grandson to go and watch Wolverhampton Wanderers

Despite having an 80-year age gap, Darcey Dyson and her neighbour Thomas ‘Darell’ Jago see each other every day and have been best friends since the little girl moved next door five years ago.

But when the coronavirus pandemic forced Darcey, eight, and Darell, 88, to no longer be able to visit each other, the little girl invented a game to make sure she didn’t miss out on quality time with her pal.

Mum Cari Dyson videoed her daughter giggling with delight as she waved a long bamboo stick over her garden wall – with Darell visible from his side waving a long cane back at her last week. 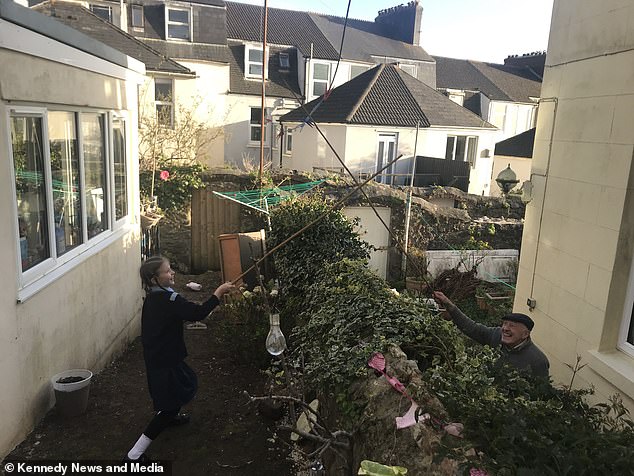 Despite having an 80-year age gap, Darcey Dyson and her neighbour Thomas ‘Darell’ Jago see each other every day – and devised a sword fight game to keep playing during lockdown

Cari claims that, although the pair were six to eight metres away from each other, being able to continue having fun helped to keep things normal for both of them.

Cari posted the video online where it received more than 2,900 comments – with people dubbing the pals’ antics ‘adorable’.

Darcey, from Plymouth, Devon, said: ‘Darell is my best friend. We adopted him [as my grandad]. We play lego, we play tea parties, we do sword fights, we play cafes. I got really bored because I was at home and not at school. 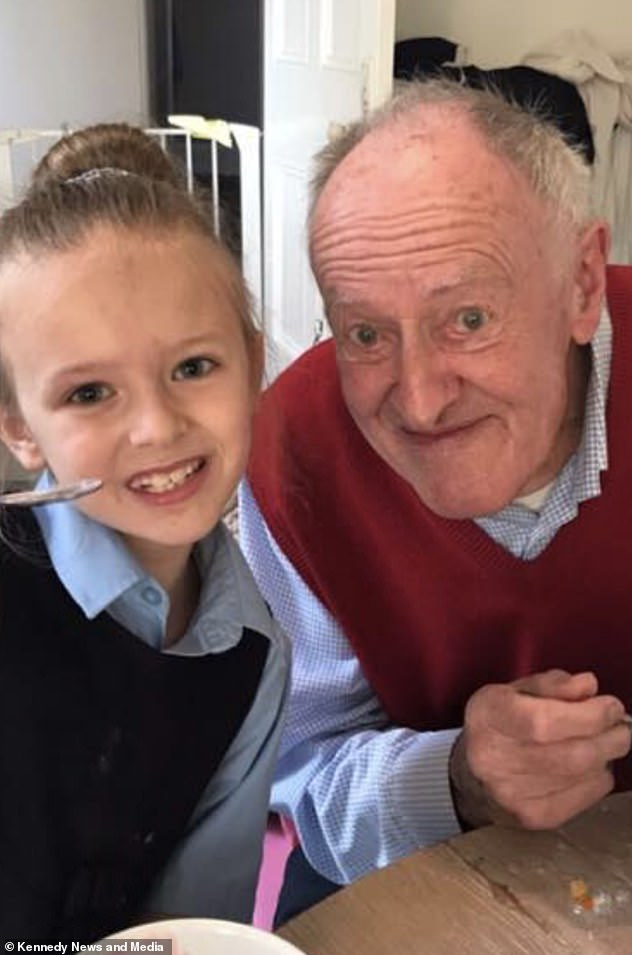 ‘Darell was at home as well so I found really long bamboo sticks in the garden and I gave one over to Darell over the wall, and I had one and we had a sword fight. We’re having a sword fight every day.

‘I’m missing Darell. I’m looking forward to seeing him in the future. We’ll have a tea party. We’ll do some baking too. That’s what we always do.’

Mum-of-three Cari claimed that Darcey had been worried about Darell and looks every morning to make sure he has opened his curtains to show he is okay.

Cari, who works as a teacher, said: ‘Darell is remarkable. He’s just amazing. We adore him. 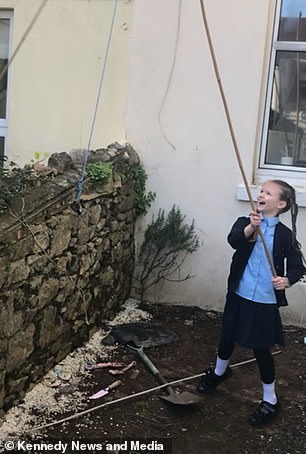 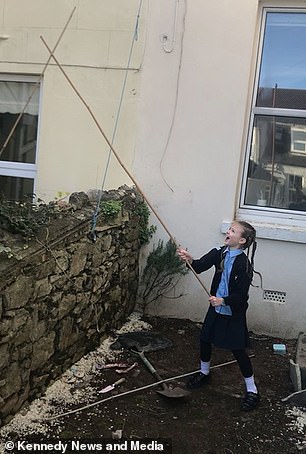 Darcey and Darell enjoy a daily sword fight over the garden wall, while the little girl checks on him every morning to make sure he’s OK

‘We had to say to Darcey, “Because of daddy’s asthma, you won’t be able to play with Darell so we’ll have to ring him on the video and you can wave to him through the window”.

After the pair devised this game, Cari said they’ve been playing it most days ever since.

‘He really has to stretch to see her, but he can see her stick. Our garden is three feet higher than his garden, and there’s obviously the garden wall too, so he’s quite low down. They’ve been playing lots.’ 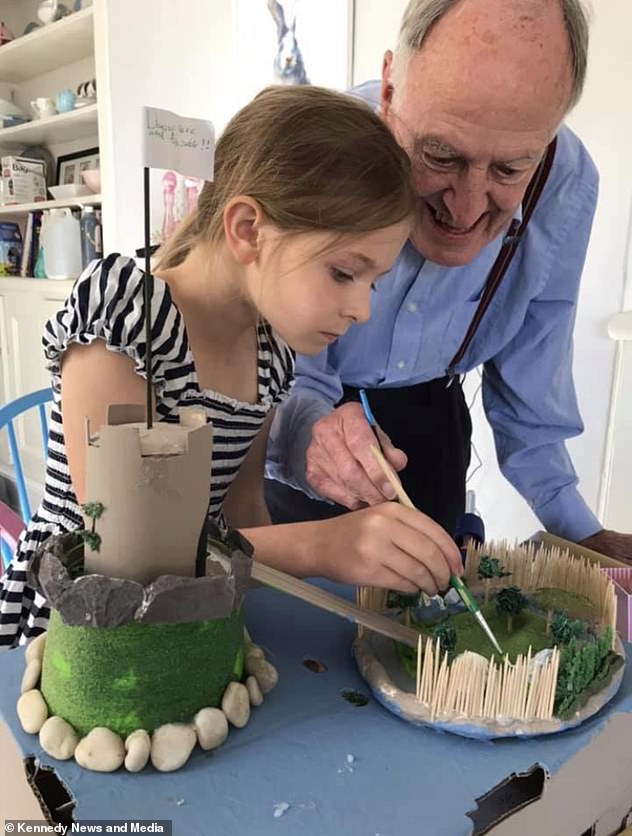 Darcey’s mother Cari, who works as a teacher, said: ‘Darell is remarkable. He’s just amazing. We adore him’. Pictured: the pals making a cake prior to lockdown

As well as playing over the garden wall, the pals have switched their usual board games to playing snakes and ladders online and hold up notes to each other through their windows.

Cari, 36, also keeps an eye out for Darell by making him dinner and passing it over their garden fence for him – while also making sure she can pop out to get him any supplies if he needs them.

Cari said: ‘It’s so sweet. So many people have commented on the video.

‘We moved in about five and a half years ago when Darcey was only three. They made an immediate bond the day we moved in, and ever since then they have been completely inseparable.

‘He’s 80 years older than her and she calls for him like children do for each other on the street. She’ll go and knock [on his front door] and say, “Are you coming to play?”. He’ll come round and they play Lego and Barbies. He lies on her bedroom floor and plays Barbies with her for hours on end. She bosses him about and gets him to fix her dolls house when it’s broken. 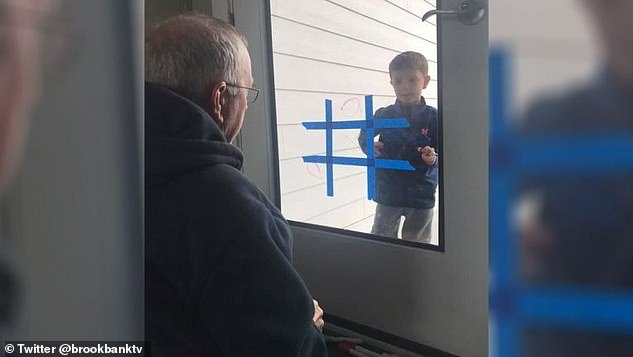 Others have taken to social media to share their inventive lockdown games. Mike Brookbank, from Cleveland, shared this photo of a grandpa playing a game of tic-tac-toe with his grandson 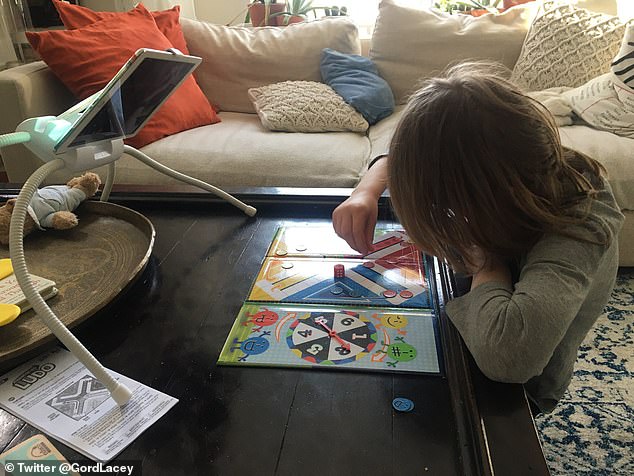 Gord Lacey, from Edmonton, Alberta, shared this sweet photo of his son playing board games with Grandpa using FaceTime on an iPad. He said: ‘They’re having a blast!’

‘They just chat for hours and hours. Even if he’s doing something in his garden and she’s doing something completely different in her garden, they’ll be having a chat while they’re busy. She’s very worried about Darell. She keeps saying, “Have we seen Darell today? Is Darell there?”.’

Retired architect Darell, from Plymouth, said: ‘It was Darcey’s idea. I had quite a bit of bamboo stuff I use for growing beans and all that. I gave some to Cari and Darcey was out the back on her side, and the sticks were standing there being unused.

‘She decided it would be fun to have a bamboo fight. So, on guard, you know. I must admit, when she was setting it up and the bit on her video, I love her laugh. That was lovely. 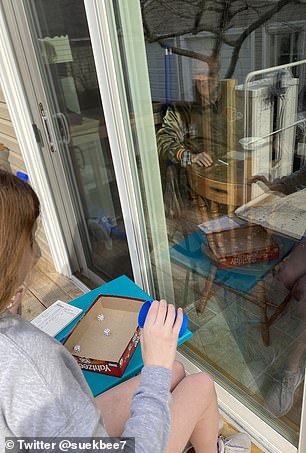 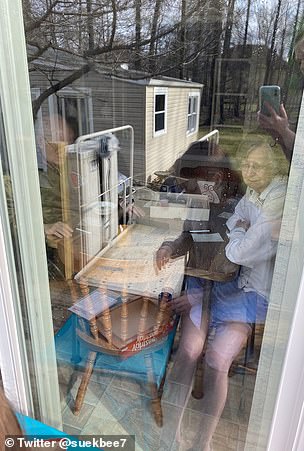 Susan Morrison, from Cleveland, Ohio, also shared a photo of her daughter playing Yahtzee with her grandparents through a glass door

‘Darcey has quite a bit of fun. They are all lovely children. She likes to think up all sorts of things to do. She likes drawing and painting. She does lovely little letters to me.

‘The video was a bit of fun, wasn’t it. The thing I like best is the way Darcey laughs in it. That really caught me.’

Others have taken to social media to share their inventive lockdown games.

Gord Lacey, from Edmonton, Alberta, shared a sweet photo of his son playing board games with his grandpa using FaceTime on an iPad. He said: ‘They’re having a blast!’

Matthew Tomaszewicz, from San Francisco, also posted an adorable photo of his daughter playing Battleships with her grandfather to Twitter. 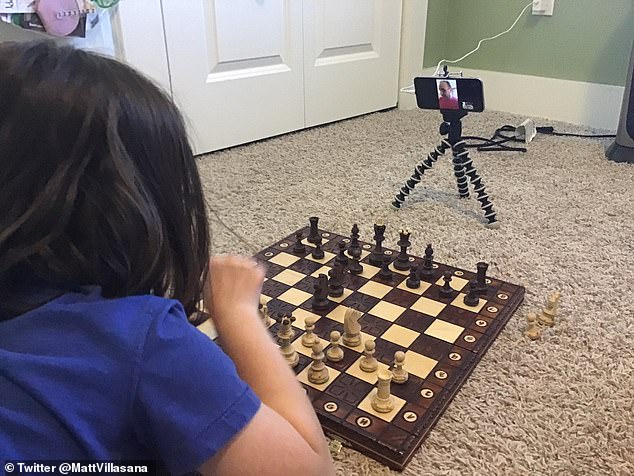 Matt Villasana, from Columbia, Missouri, shared a photo of his son playing chess with Grandpa Tony in St. Louis 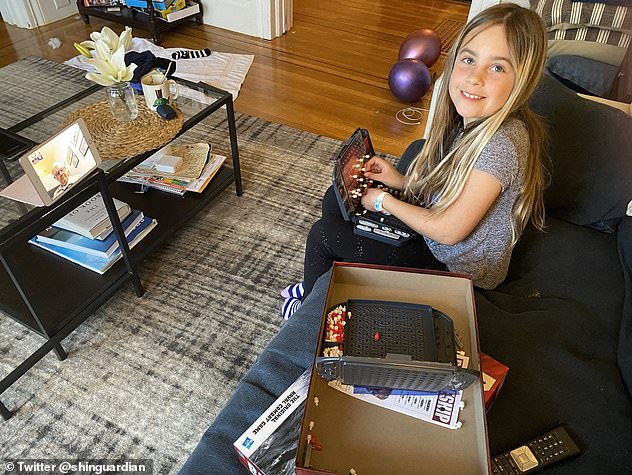 Matthew Tomaszewicz, from San Francisco, shared this adorable photo of his daughter playing Battleships with her grandfather 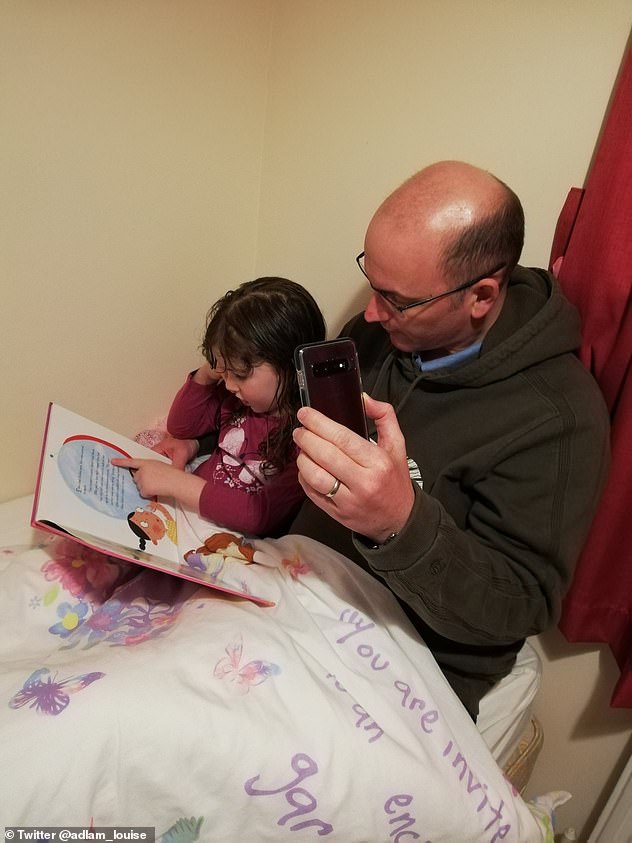 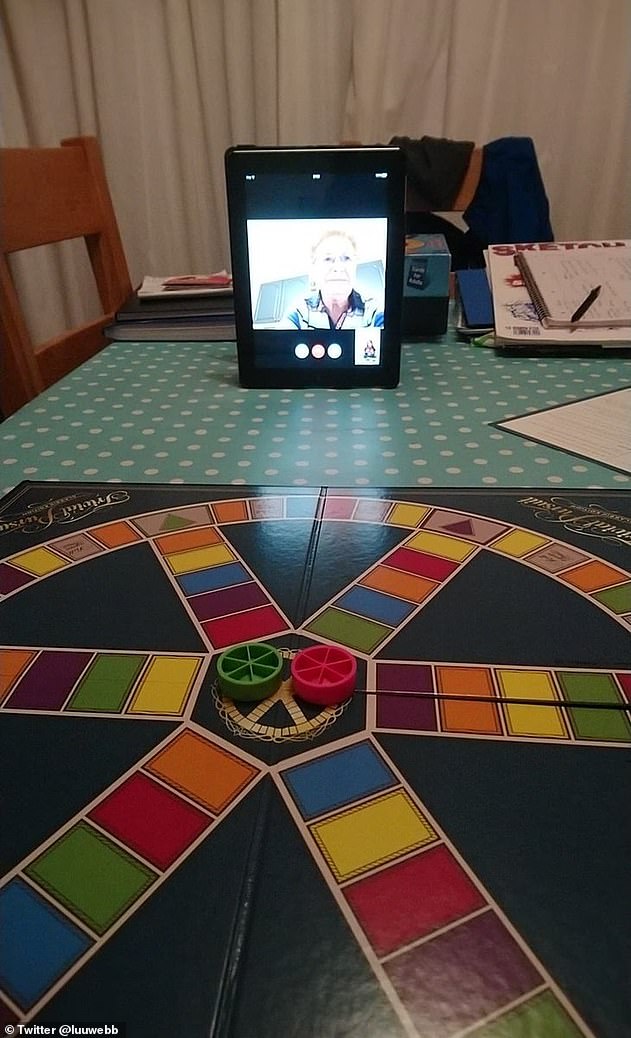 Twitter user Lucy, from Edinburgh, shared a sweet photo of her aunt playing Trivial Pursuit with her nan via FaceTime

He captioned it: ‘My daughter beating her grandpa – a former US naval intelligence officer- at Battleship on FaceTime. First time the US lost a ship in wartime since 1945. My dad lost five in a half hour tonight. Embarrassing.’

Journalist Mike Brookbank, from Cleveland, shared a photo of a grandpa playing a game of tic-tac-toe with his grandson through a window, with the caption: ‘Heartwarming or heartbreaking?’

Susan Morrison, from Cleveland, Ohio, also posted a photo of her daughter playing Yahtzee with her grandparents through a glass door. 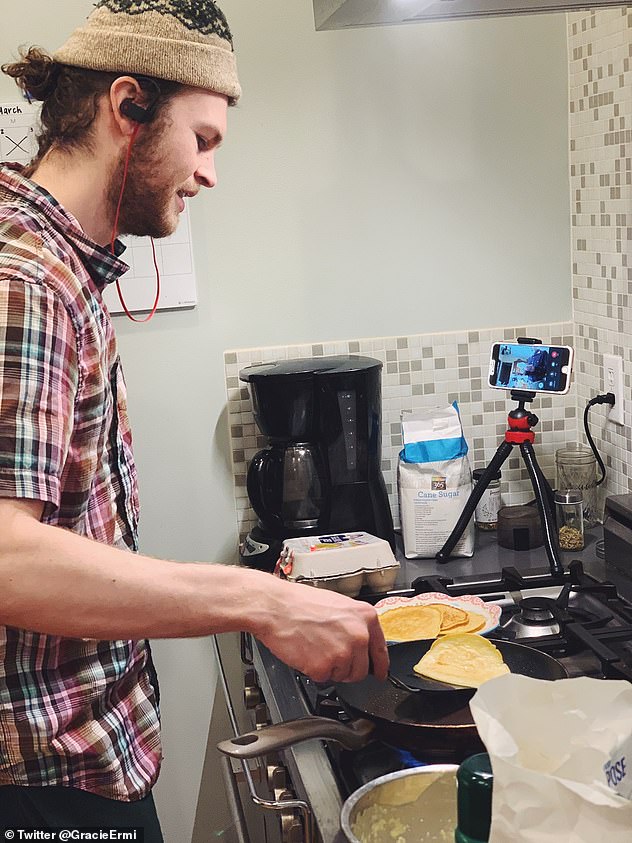 Gracie Ermi, from Seattle, posted a photo of her boyfriend cooking with his grandfather via a video call

And Twitter user Lucy, from Edinburgh, shared a sweet photo of her aunt playing Trivial Pursuit with her nan via FaceTime.

Meanwhile Gracie Ermi, from Seattle, posted a photo of her boyfriend cooking with his grandfather via a video call.

She captioned the post: ‘Looking for a fun way to hang out virtually with loved ones? Try cooking together over FaceTime! My bf cooked breakfast with his grandpa the morning and lemme tell ya, our stomachs and our hearts were full afterwards.’

Catcher James McCann is signing with the Mets