Shocking video has emerged of what appears to be the murder at point-blank range of an unarmed Afghan man by an Australian special forces soldier in 2012.

The helmet-camera footage that aired on Four Corners on Monday night shows part of a village raid in Oruzgan province in May 2012, when a man was spotted by the Special Air Services Regiment patrol scout in a wheat field. 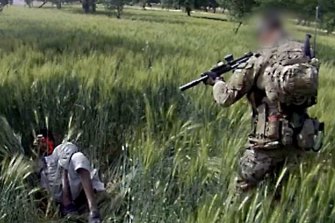 Screenshot from video obtained by ABC Four Corners of an Australian soldier allegedly about to murder a subdued Afghan man in a field in Oruzgan province in 2012.

The man was subdued by an SAS squad dog and was lying on the ground. He appeared to be carrying prayer beads in his right hand when the patrol scout, identified by Four Corners only as "Soldier C", called out three times to his superior officer, the dog handler, saying "Do you want me to drop this c—?

No answer was forthcoming, but the footage shows the soldier shooting the young man dead anyway from about two metres away.

A subsequent defence investigation was told the Afghan man was spotted with a radio and "engaged" and shot from 15 to 20 metres away. On that evidence, which is directly contradicted by the video footage, the military inquiry cleared Soldier C of any wrongdoing.

The video evidence has emerged as an Inspector-General of the Australian Defence Force investigation has confirmed it is investigating 55 separate incidents emerging from Australian special forces' deployment to Afghanistan, involving “predominantly” allegations of unlawful killings of non-combatants or those who are no longer combatants.

It also comes after The Age and The Sydney Morning Herald have revealed repeatedly over the past two years alleged war crimes including murders. Many of those allegations are denied.

The ABC program also re-told the story of an alleged murder in the village of Sarkhoum in which a man named Haji Sadr was taken away from an Australian medic after being injured in a firefight and allegedly beaten to death by another special forces soldier, identified only as Soldier B.

The Age, the Herald and 60 Minutes aired the first interview about that incident with the former SAS medic, Dusty Miller, last September.

The ABC program quoted a former SAS soldier, Braden Chapman, who described a "buzz of elitism" from being part of the special forces. However, he also recalled a senior soldier saying at the start of his deployment: "I hope you're ready and prepared for this deployment because you have to make sure that you're OK with me putting a gun at someone's head and pulling the trigger." 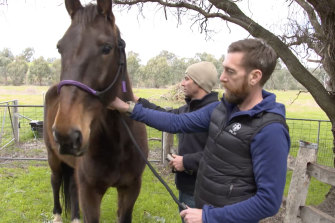 Mr Chapman said it was routine for Australian soldiers to shoot the dogs of villagers, destroy their property and plant radios and guns on the bodies of dead Afghans to justify their false description as combatants.

One soldier was shown on helmet video spraying the body of an already dead suspected Taliban combatant with bullets and, a few days later, ordering an Afghan soldier to kill another man who had already been arrested and bound.

He also said that he had witnessed an incident involving a still-serving SAS soldier identified as "Soldier A," who allegedly shot an unarmed man twice in the chest and once in the head. The Afghan man had thrown away his phone and had his hands up.

"It was target practice for the soldier … in my book that's murder," Mr Chapman told the program.

Another patrol then came past and an assault dog was allowed to chew on the dead man's head, the handler saying, "Let him have a taste," Mr Chapman alleged.

Mr Chapman also described an incident in the village of Sola, in which a father and his son were killed by a man known only as Soldier B. Afghan human rights activist Shahrzad Akbar said both men were unarmed and civilians, but an Australian defence investigation found both deaths were justified.

Mr Chapman said that SAS soldiers joked among themselves about "the size of the rug that they've swept everything under," and that, "one day everything's going to come out and people were going to go to jail for murder".

Mr Chapman said: "I just want the truth to come out and people who did commit crimes, be held accountable."