Home » Lifestyle » Have You Reconnected With Someone From Your Past? We Want Your Stories.

Lauren never would have thought that a casual conversation about reality TV would bring up a chance meeting from her past and completely reshape her future.

During her senior year in high school, Lauren drove from Long Island to visit friends at Boston University, who introduced her to their new dorm room buddies, including a first-year student from Chicago. Twelve years later, while attending Columbia Journalism School, Lauren struck up a conversation with a guy named Craig whom she’d secretly had her eye on. Their meandering chat turned to reality-TV shows, and Lauren mentioned she had a friend who’d been a contestant on “The Amazing Race.” Craig knew someone who’d been on that show, too, he said.

Turns out, they were talking about the same person — and she had introduced them in that dormitory hall in Boston more than a decade earlier. Their second time around, Craig from Chicago and Lauren from Long Island hit it off. They are now married with a kid.

Nearly everyone we talked to around the HuffPost newsroom seems to have a story about a meaningful reconnection ― whether it’s bumping into a childhood friend far from home years later, reuniting with family members living in another country, or rediscovering a long lost romance.

When Jenn was an exchange student in Germany, she ended up getting paired ― and living ― with her mother’s best friend from college in Surabaya, Indonesia, whom her mother hadn’t seen in years. They had both married and moved away after college ― Jenn’s mom to Cerritos, California; the woman Jenn would come to call “Mama” to Bamberg, Germany. Jenn got to spend a year living with Mama’s family and learning more about her mom, her background and herself.

In January, Leezel wrote for HuffPost’s Life section about how the Filipino community was fighting medical invisibility. While reporting the article, which went viral within the community and was shared widely within medical circles, Leezel didn’t realize that she already knew someone involved in her story. The doctor she interviewed mentioned that the woman who played the grandmother in a PSA referenced in the article remembered Leezel from Loyola Marymount University. She had been her teacher. Now they are back in touch.

Despite the flurry of social media all around us, real connections can sometimes be hard to maintain. Research shows that social media makes us less likely to be social in the real world. A 2020 survey of 10,000 American adults found that 61% considered themselves “lonely” ― 7 percentage points up from 2018. Still, reunions do happen, whether by chance or by choice. And at a time when isolation and loneliness are on the rise, building and maintaining strong personal connections can help buck the trend.

The good news is that while it’s so easy to fall out of touch, it can be nearly as easy to rekindle a friendship by reaching out again. Sometimes all it takes is a call, text, email, card or letter to rekindle a lost friendship. And a little goes a long way. As HuffPost wrote in “The Best Way to Save People From Suicide,” check-ins in the form of letters ― even form letters ― have been shown to significantly reduce suicides. And one study found that people with strong social relationships had a 50% higher likelihood of living a longer life.

Reconnecting with someone can be a powerful moment. Have you reconnected with someone, unexpectedly or on purpose? What happened?

We want to hear your stories about reconnections for a future HuffPost project. Send your stories, photos and videos to [email protected] 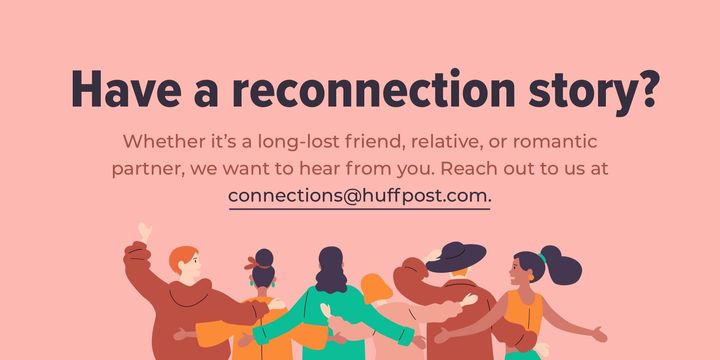 'Spider-Man: No Way Home': Tom Holland Is a Huge Fan of BTS