Zach Krouse is 93 and applied for permanent residency in Australia to live near his daughter back in 2014. Last month, they checked for an update and were told his application would be processed in 2064.

The small number of visa places allocated to aged parents and dependent relatives each year has led to processing times blowing out to between 30 and 50 years. 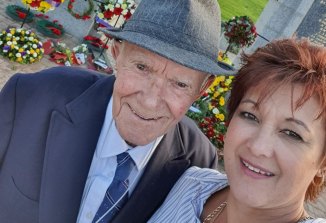 Zach Krouse, 93, pictured with his daughter Melanie, has been told his visa application won’t be assessed until at least 2064.

Even for those who can afford nearly $50,000 for a “contributory parent” visa, official wait times have more than doubled from two years to five since 2016. People waiting say there are so many in the queue the reality is more like 10 years.

Mr Krouse lives with his daughter Melanie in Canberra on a bridging visa, and she says they were shocked when they found out he would now wait 50 years before his application was even looked at.

“We really appreciate that the Australian government would actually consider keeping him here on a permanent residency,” she said. “But he would be long gone by 2064. Even I, myself maybe will be gone by then.”

Labor MP Andrew Leigh, who Melanie turned to for help, said the government didn’t appear to be doing the right thing by people.

“No competent or compassionate government would let visa application times blow out to 50 years – let alone a visa for aged people,” he said. “Mr Krouse is 93. What good will consideration of his visa be in 50 years?”

Australia has 160,000 spots open to migrants each year. Usually, about two-thirds of these are allocated to skilled migrants and the rest for the family stream which is dominated by partner visas. This year, because of the pandemic border restrictions, the balance between the two streams is roughly 50-50.

Out of the 77,300 places in the family stream, just 5000 are set aside for parents. Once the annual limit is reached, no more visas are granted.

“The Australian government appreciates that the limited number of places for these visas each year may be disappointing for some members of the community,” a Home Affairs spokesperson said.

Migration lawyer Jaleh Johannessen said in a submission to a Senate inquiry into the family visa system she had clients who were still waiting for visas lodged in 2010 or 2011 to be processed.

“I have had several applicant parents who died over the years waiting for their visa,” she wrote.

Asked whether the department knew how many people died before their visas were granted, the Home Affairs spokesperson said it didn’t collect reasons why applications were withdrawn.

Other submissions said the decades-long processing times for non-contributory visas meant that class should be scrapped.

Home Affairs data shows the number of applications for non-contributory parent visas has remained fairly steady at around 50,000 in the queue since 2014-15.

Applications on hand for contributory parent visas have grown steadily over the same period, from about 26,000 in 2014-15 to more than 60,000 applications in 2020-21, while the number finalised each year has dropped.

Greens immigration spokesman Nick McKim says the system is “completely and utterly broken” when it comes to these visa classes. “It needs to be made faster and fairer and more affordable.”

The annual caps on family visas were a policy decision that Senator McKim said could be fixed “with the stroke of a pen”.

“It’s just heartbreaking to think that people in Australia have to watch an elderly parent or elderly parents on the other side of the world slowly get closer to death without being able to look after them. And that’s what this government is condemning so many Australian families to.”

However, many of the submissions to the Senate inquiry expressed disappointment with the doubling of contributory parent wait times from what was promised when they lodged applications.

One submission calls the waiting times “outrageous” while another says the department is being misleading because the number of applications in the queue compared with the spots available suggests “the actual waiting time is realistically closer to 10-12 years for new applications”.

”My ageing parents, like thousands of others, do not have time on their side,” writes Sarah Watson, whose parents are in Britain.

“Had we known we were in for an eight-to-10-year wait, we would not have applied for this visa.

“My husband and I are reaching the stage where we are seriously considering leaving Australia for good, as we cannot see another way to ensure we can care for our parents when the time comes.“

Wife reveals how friend's lie shattered her after husband's affair