Long-distance train and bus services could be halted to curb the spread of the coronavirus if the government follows the advice of the nation’s top health officials.

However, the Australian Health Protection Principal Committee – an emergency group made up of the states' chief health officers and Chief Medical Officer Brendan Murphy – also advised the nation's new coronavirus cabinet that the overall number of trains, trams and bus services may need to go up to thin out commuter crowds. 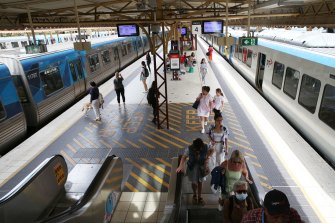 Commuter numbers are thinning out on suburban services.Credit:AAP

Public transport is considered an "essential service" and is exempt from the rules that ban indoor gatherings of more than 100 people across the country.

The Victorian government has continued running the state's public transport network as normal, with school students, workers and other commuters relying on it to get around.

Metro, V/Line and Yarra Trams have ramped up their cleaning regimes to limit the spread of the virus – a move Premier Daniel Andrews said would come at a "very considerable cost".

But Victoria’s trains, trams and buses have become increasingly empty over the past fortnight and city train stations that usually brim with commuters at peak hour are now chillingly vacant with many people following the official advice to stay home if they can.

The network could soon become even more deserted after the national health committee called for a rethink on longer public transport journeys.

"Long-distance bus or train services pose a higher risk and should be reconsidered if not essential," the committee's advice stated.

Victoria’s Transport Department is working with the transport operators to review these measures but increasing services on the network is unlikely in the wake of a dramatic drop in patronage. 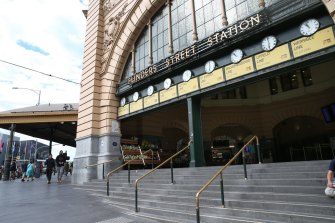 Meet you under the clocks: Flinders Street Station steps are empty.Credit:AAP

Half as many people used Southern Cross on Tuesday compared with a typical day.

Transport planners expect services could eventually be wound back to follow a weekend timetable but this is not being actively considered by the Victorian government at this stage. Services may be cancelled if drivers or network controllers fall ill with the virus or are in isolation.

“As part of our planning for possible scenarios, there may be a need for changes to public transport services," a department spokesman said.

"This will only be done following expert medical advice and we’ll communicate with passengers and staff ahead of time should that be required.”

The Australian Medical Association's state president Julian Rait said employers should stagger work times to avoid overcrowding. He advised commuters to maintain a healthy distance from other people and use hand sanitiser regularly.

"If people can carry hand sanitiser, put it on their hands before they get on the train and after they get off, I think that's good personal advice."

Transport operators activated a new suite of cleaning measures on Tuesday that will see all trains, trams and buses undergo nightly sanitisation and a clean at the end of the line each day. All surfaces are being wiped down and sprayed with disinfectant.

"There is a whole regime that has been put in place that was agreed to," Premier Andrews said on Wednesday. "It comes at a very considerable cost but it's exactly what we have to do. I want to thank our private operators for their partnership to get this done."

Endometriosis: How do I know if I have endometriosis? How do you cure it?

I Refuse to Let My Wedding Be a Weight-Loss Goal