On Thursday, Simon Holmes a Court, the founder of the fund-raising vehicle Climate 200, apologised to Superannuation Minister Jane Hume after confronting her at a Hawthorn polling booth in an uncomfortable interaction filmed by Treasurer and incumbent Kooyong MP Josh Frydenberg.

It was the latest in a string of controversies since the wealthy activist launched Climate 200 in 2019. The group has backed 23 “teal” candidates across the country, including the high-profile Monique Ryan in Kooyong, Zoe Daniel in Goldstein and Allegra Spender in Wentworth. 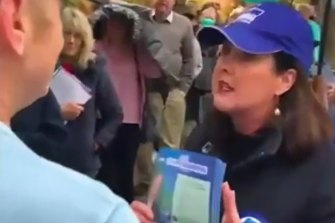 Stills from footage of Simon Holmes a Court confronting Liberal Senator Jane Hume outside a polling station in the seat of Kooyong, in Melbourne’s east.Credit:Nine News

The candidates and Holmes a Court have repeatedly denied Coalition claims that the teals are “fake” independents and that he is pulling their strings. They insist Climate 200 has no say in choosing candidates, where they run or which policies they support.

“Cross my heart and hope to die that all the campaigns we are supporting started from inside their own electorates,” he told The Age and The Sydney Morning Herald in March. “Every single one is grassroots.”

But Holmes a Court’s high media profile, his prolific and sometimes impulsive Twitter use and his direct and personal involvement in Ryan’s campaign, have confused the messaging about independence.

Former Liberal leader John Hewson is on the advisory council for Climate 200, and puts it diplomatically. Holmes a Court “didn’t need to be on the front line” in this campaign, he said.

After the election, “there will be discussion about the campaign and how it could have been done differently”.

Too often Holmes a Court has been too prominent, according to some independent candidates and their supporters. None would speak on the record on the eve of the election, and all say Holmes a Court’s passion for greater action on climate change has been pivotal and welcome.

Some veterans of the “Voices” movement that spurred the teal campaigns have long been concerned that Holmes a Court, as a substantial donor to Climate 200 and, therefore to candidates, should avoid making commentary that could be perceived as speaking for teal independents.

The concern was first raised with The Age in February when Holmes a Court addressed the National Press Club about the role of Climate 200, leading to grumbles that because he was a financial donor, his statement could confuse the public about his role.

Holmes a Court has said Climate 200 is a “giving circle”, a vehicle through which thousands of donors have contributed more than $12 million to help independents level the playing field in an electoral system stacked against them.

There is crossover and close working relationships between Climate 200 and some of the campaigns it supports. Climate 200 advisers are involved directly in some, including helping build up volunteer bases, assisting with strategies for consulting communities about policy and in campaign tactics and media.

However, it is his direct involvement in Ryan’s campaign that raises most eyebrows. He advises the campaign and has attended campaign meetings. He has said he is participating as a Kooyong resident, not on behalf of Climate 200.

Holmes a Court is a former Liberal donor who founded Climate 200 in 2019 after he was expelled from Frydenberg’s fund-raising arm, Kooyong 200, for publicly criticising Coalition energy policy.

There is strong feeling between the two men, made more so through the bitterness of this contest in a once safe Liberal seat.

Holmes a Court says he recuses himself from Climate 200 funding decisions involving Ryan. Climate 200 has contributed about $500,000 to the Kooyong campaign.

One teal candidate told The Age and The Sydney Morning Herald that Holmes a Court having dual roles with both Climate 200 and the Kooyong campaign was not helpful.

“I have no problem with Climate 200, but then there was also his personal involvement in the Kooyong campaign. The two things have kind of merged, confusing things.”

In the final days of a long campaign, Holmes a Court visited the Hawthorn polling booth, knowing that Hume was there supporting Frydenberg. He had been frustrated by Hume’s allegations about the influence of Climate 200 on teal independents and was angered by claims that one of his tweets which referred to “angel of death” in relation to former prime minister John Howard was anti-Semitic.

On Thursday, he said in a statement that Hume had for several years “repeatedly used her position to spread lies and misinformation about me”.

“Despite ­remaining calm throughout the conversation, it is clear that a public space was not the forum to ask her to retract her lies, and for that, I apologise to Senator Hume.”

Ryan camp insiders were less than happy as the confrontation was a major distraction from campaigning.

Another teal supporter told The Age: “I wish he’d throw his phone in the river.” Hewson said that “independents have a hard enough job” without such distractions.

Holmes a Court declined to be interviewed on Friday.

Cut through the noise of the federal election campaign with news, views and expert analysis from Jacqueline Maley. Sign up to our Australia Votes 2022 newsletter here.