The Royal Melbourne Hospital has handed back a donation made by the first person in Australia to be charged under foreign interference laws but kept thousands of dollars from the organisation at the centre of the probe.

In November the Australian Federal Police charged Di Sanh Duong, who also uses the name Sunny Duong, with preparing an act of foreign ­interference following a year-long investigation. He was released on bail and is due to appear in court later this month. The offence carries a potential jail term of 10 years. 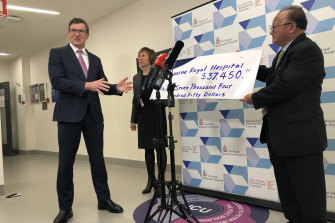 In June, five months before he was charged, Mr Duong toured the Royal Melbourne Hospital with then-multicultural ­affairs minister Alan Tudge, after giving the money to the hospital for COVID-related research.

The hospital confirmed to The Age and The Sydney Morning Herald that it had returned the personal contribution Mr Duong made as part of a $37,450 donation by the Oceania Federation of Chinese Associations, which represents people of Chinese descent from Vietnam, Cambodia and Laos.

At the time, government sources told The Age and The Sydney Morning Herald that the donation wasn’t directly from Mr Duong but was made up of smaller donations from the community.

The Royal Melbourne Hospital has since confirmed it received $37,450 from the Oceania Federation which consisted of 29 individual donations, including one made by Mr Duong. That contribution has been returned but the charity kept the remaining 28 donations.

At the time Mr Duong was serving as the president of the Oceania Federation of Chinese Organisations from Vietnam, Cambodia and Laos Inc.

Speaking during the media event alongside Mr Tudge, Mr Duong said he considered Australia to be his home and that the organisation he presided over, wanted to do its part “when Australia is in need”.

“We care about what's happening for Australia. And that's why we, right away, are fundraising for the hospital to show our thank you for the frontline workers,” he said.

“I would give you a big hug but I’m not allowed to in these pandemic days, Sunny,” he added.

The Age and The Sydney Morning Herald are not suggesting Mr Tudge had any knowledge of the matters that are now the subject of Mr Duong’s charges.

Asymptomatic people with coronavirus may have weaker immune response