HOUSE prices jumped £4,500 in July as the property market bounced back from the coronavirus lockdown – but experts have warned the recovery won’t last.

Property hunters were spurred on after the government announced it was temporarily scrapping stamp duty on homes up to £500,000. 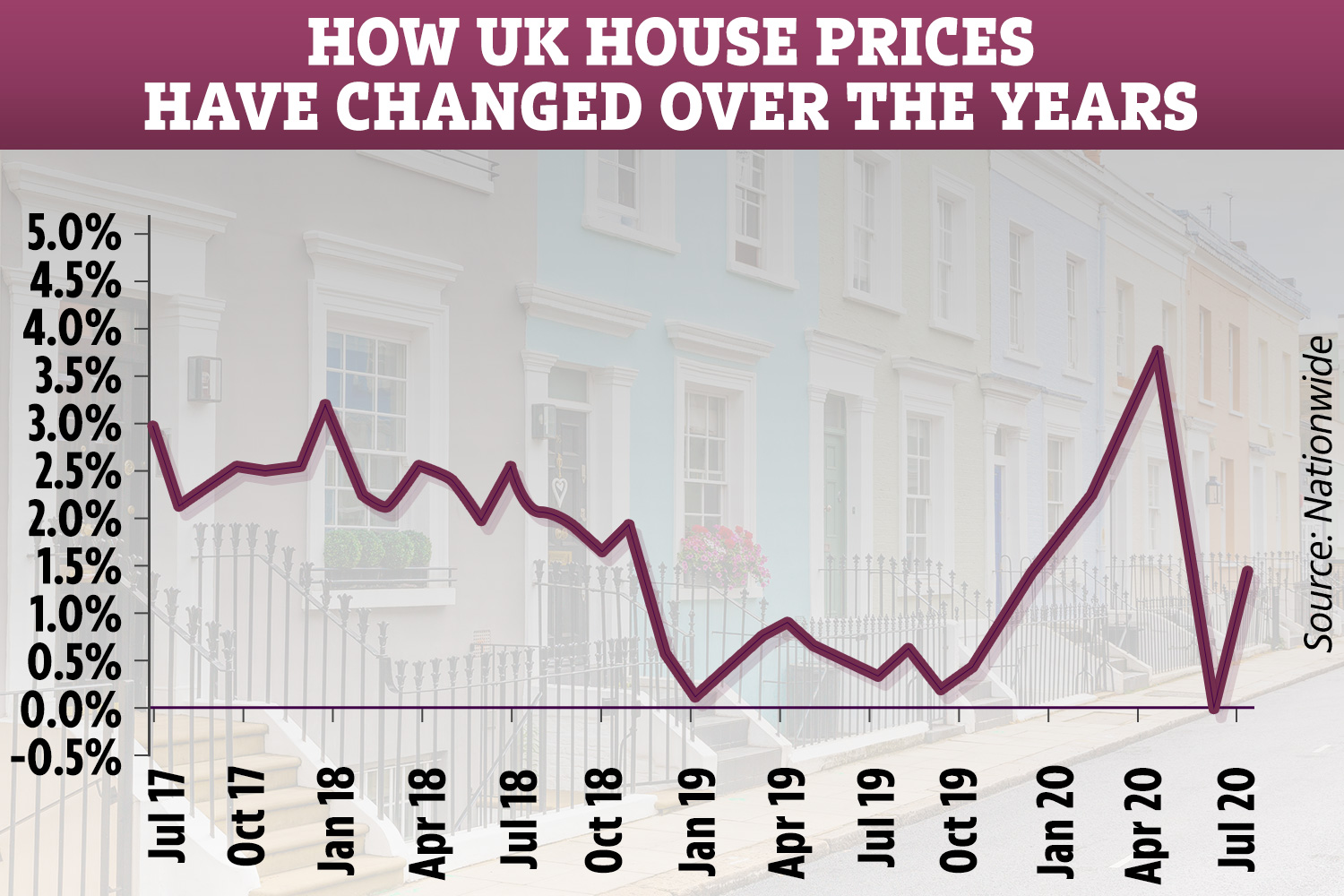 The better-than-expected house prices were also due to lockdown restrictions being eased, economists say.

The housing market ground to a halt after the government put a ban on moving house to stop the spread of Covid-19.

But these restrictions were eased in mid-May to help kick start the economy through property sales.

The latest index from Nationwide Building Society shows the price of the average UK home surged by £4,533 to reach £220,936 in July.

This is up 1.7 per cent compared to last month, where June property prices were £216,403 on average.

Stamp duty changes – what are the rules?

The Chancellor Rishi Sunak announced the temporary relief earlier this month to help boost the economy following the coronavirus lockdown.

The stamp dity holiday will run until March 31, 2020, and will be applied to all residential purchasers.

This includes first-time buyers, second-steppers and those who are looking to downsize.

But Brits who are buying additional properties, for example buy to let, will have to pay the usual 3 per cent surcharge on properties below £500,000.

Before the Chancellor's announcement home buyers did not pay any stamp duty on the first £125,000 of homes – the rate then goes up in stages.

House prices had fallen by 0.1 per cent in June compared to the same time last year following the economic shock caused by Covid-19.

The July figure is also 1.5 per cent higher than the same period the year before, where prices reached £217,663 on average.

The jump comes after a survey, conducted by Nationwide in May, showed around 15 per cent of people were thinking about moving home because of their new locked down lives.

But experts warn the housing market is in a "false dawn" and predict prices will drop again later in the year.

His stark warning comes as separate research from the National Institute of Economic and Social Research (NIESR) estimates 1.2million Brits will be unemployed by Christmas after furlough comes to an end.

Figures from the Office of National Statistics also show almost 20 per cent of workers are still on furlough today.

Nine million employees have been rolled onto the scheme since it launched back in March.

Mr Gardner said: "The bounce back in prices reflects the unexpectedly rapid recovery in housing market activity since the easing of lockdown restrictions.

"Most forecasters expect labour market conditions to weaken significantly in the quarters ahead as a result of the after-effects of the pandemic and as government support schemes wind down."

He said: "The UK housing market is in a honeymoon phase: post lockdown, with sentiment boosted as both banks remain desperate to lend and by government stamp duty and Help to Buy proposals.

"The reality is very different, as the UK is staring down the barrel of mass unemployment."

The drop in average house prices is welcome news for first-time buyers but they now face new challenges when it comes to getting a mortgage.

Many lenders have withdrawn high loan-to-value deals meaning those hoping to get their first steps on the property ladder now have find a minimum 15 per cent deposit, instead of 5 per cent.

Earlier this month, figures from the Office of National Statistics showed the UK economy grew by 1.8 per cent in May – dashing hopes for a V-shaped recovery.

It comes after the UK economy fell by 5.8 per cent in March as coronavirus lockdown triggered a crash in activity.

Gross domestic product (GDP) then plunged by 20.4 per cent in April – the biggest monthly fall on record.

Never lose your iPhone again, thanks to this brilliant new Google Nest trick