What the world looks like to someone living with dementia: Photos reveal how the degenerative condition can drastically change the way sufferers perceive their own homes

A series of comparison images are showing the ways in which dementia and similar conditions can drastically change the way sufferers perceive their own homes.

The mock-ups by Canadian residential care firm Amica Senior Lifestyles were made to help carers and relatives understand the challenges of living with dementia.

However, the team warned, dementia is a very individual journey that can lead to a range of cognitive effects and, as such, experiences will vary among individuals. 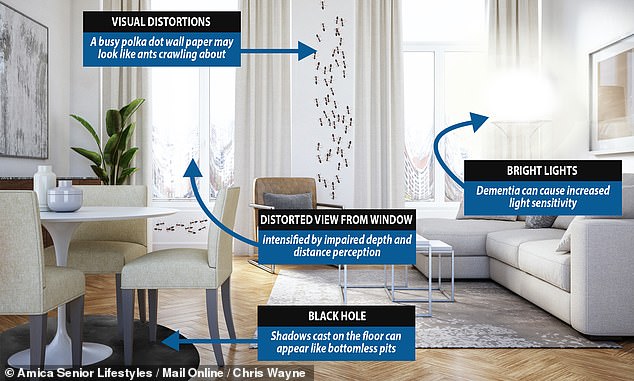 A series of comparison images are showing the ways in which dementia can drastically change the way sufferers perceive their own homes. Pictured: how the changes in perception brought on by neurodegenerative diseases like Alzheimer’s and dementia can affect a living space

Dementia is a global concern but it is most often seen in wealthier countries, where people are more likely to live to an older age.

According to the Alzheimer’s Society, more than 850,000 people in the UK are living with dementia — a number expected to exceed 1.6 million come the year 2040.

The vast majority of people with dementia are aged 65 and over, although it can also affect younger people.

‘It is hard for us to imagine how the world might seem and change for people living with dementia,’ said neuroscientist Heather Palmer, who is also a cognitive well-being advisor at Amica Senior Lifestyles and helped create the images.

‘However, it’s important to understand that certain views and behaviours might impact or be indicative of someone living dementia.’

‘From noticing changes in behaviour when walking into rooms to neglecting plants, dementia can take many forms on someone’s way of life.’

‘But, through the use of various tools and tools and approaches, those living with dementia are still able to function well — or even better than they did before.’

COGNITIVE EFFECTS IN THE GARDEN

As the below comparison shows, people with Alzheimer’s or other dementia condition often misplace items, having put them in a place that seemed to make sense at the time but does not later when the items are needed.

While this can be confusing in mild cases, such as the errant pair of slippers in the pictures, it can also be dangerous — both the open pair of secateurs on the couch and the untidy garden hose representing safety hazards.

These can be inherently more risky for some people with dementia, who will tend to pay less attention when moving through their environment, increasing the risk that they will trip, fall, and/or injure themselves on sharp objects.

Neurodegenerative diseases can also cause people to get their days and nights mixed up, for example, perceiving it to be the middle of the night in the face of outwards signs that it is in fact day — a confusion which can be frightening.

Finally, the flowers on the table are dead in the right-hand image. Many people with dementia neglect to take proper care of their home, plants, pets and even themselves, and may not know what to do with the flowers once they have died. 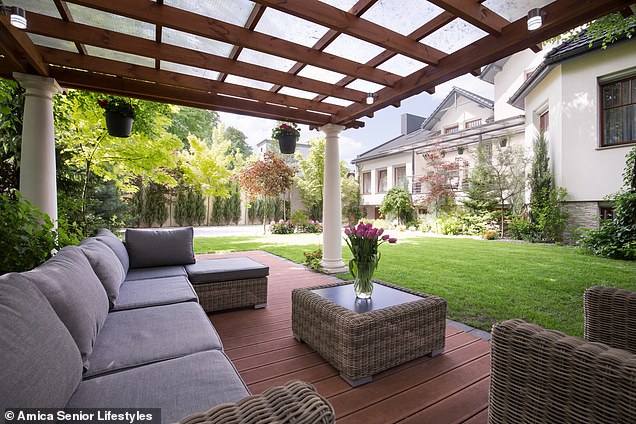 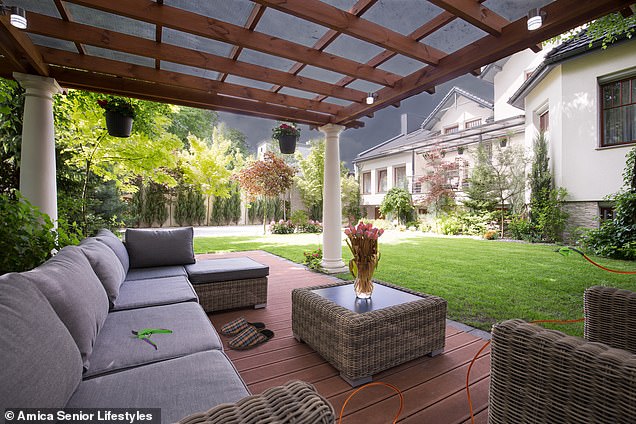 The mock-ups by Canadian residential care firm Amica Senior Lifestyles were made to help carers and relatives understand the challenges of living with dementia. Pictured: a garden (left) as experienced by someone with dementia (right). Items are in the wrong place, sometimes unsafely, the flowers have died and been left out, while dark sky symbolises the temporal confusion some patients with Alzheimer’s or dementia can suffer from

CHANGES OF PERCEPTION IN THE LIVING ROOM

This before–after image shows how an regular living space can appear frighteningly distorted to people with dementia.

The busy polka dot wallpaper paper has ended up looking like a pattern of oversized ants crawling about, while the shadow under the table has gained the semblance of a black, bottomless void and one the individual with dementia may be keen to avoid.

Cognitive disorders can also lead to increased light sensitivity – represented below by the blindingly bright lamp — and other vision problems including difficulties with distance and depth perception.

The latter, depicted here as a distorted view from both windows, can also create hazards, such as when climbing stairs or trying to pour boiling water from a kettle to make a cup of tea. 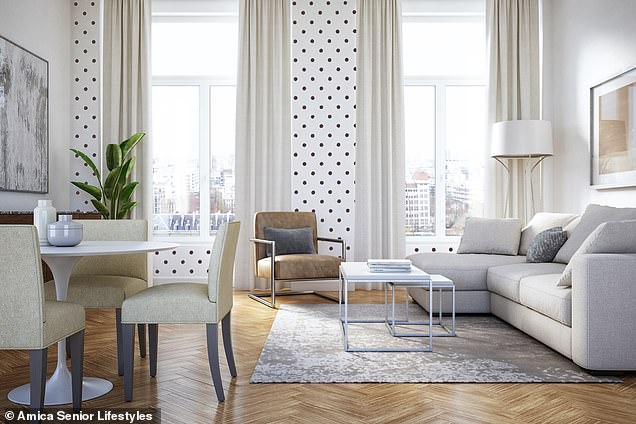 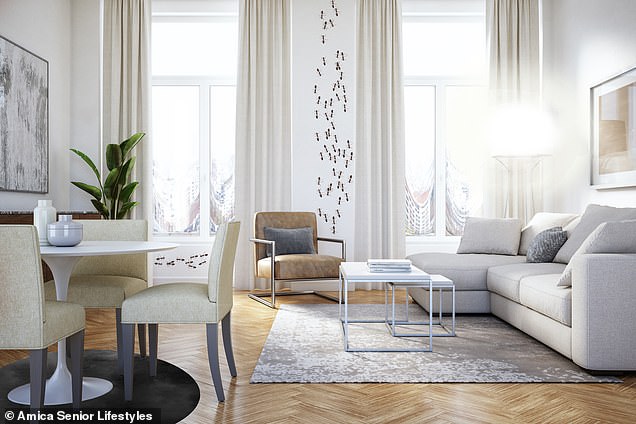 ‘It is hard for us to imagine how the world might seem and change for people living with dementia,’ said neuroscientist Heather Palmer, who is also a cognitive well-being advisor at Amica Senior Lifestyles and helped create the images. Pictured: a normal living room (left) might be altered by visual distortions in the mind of someone with dementia (right)

THE EFFECTS OF DEMENTIA IN THE KITCHEN

As on the garden table, neglected flowers, pot plants and mouldy fruit appear in the below image and are joined by more misplaced items — in this case, lost glasses.

People with dementia also experience greater problems in breaking old habits and adapting to new routines. Here this is manifested by the putting out of food for a pet that is no longer around.

Finally, the kitchen shots illustrate how a coping strategy like the use of reminder notes can be less effective than intended. Instead of sticking up the notes in one location, a person with dementia may place them randomly over the house.

Furthermore, individuals with cognitive impairments can also experience trouble deciphering their own handwriting, rendering once-useful reminders as a random collection of letters that don’t make sense any more. 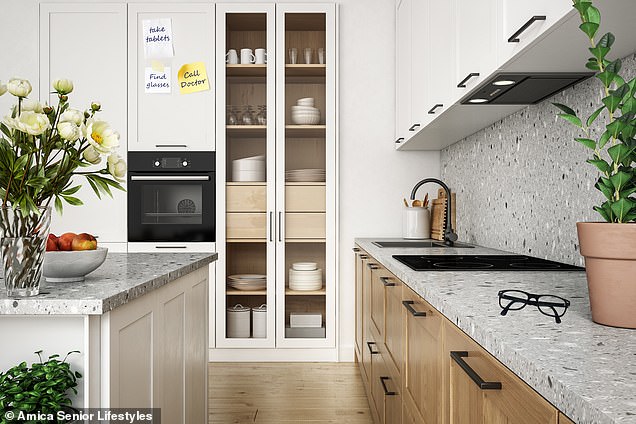 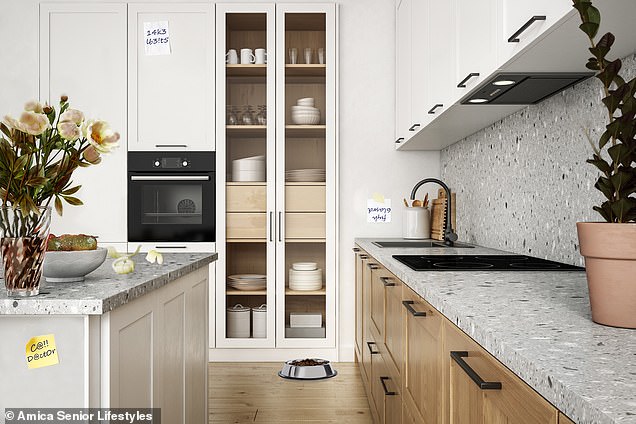 According to the Alzheimer’s Society, more than 920,000 people in the UK are living with dementia — a number expected to exceed a million come the year 2024. Pictured: a kitchen (left) might end up a muddle in the house of an individual with dementia, with misplaced items and unintelligible reminds strewn all over, neglected dead plants and mouldy fruit as well as dog food having been put out for a pet that is no longer present

WHAT IS DEMENTIA? THE KILLER DISEASE THAT ROBS SUFFERERS OF THEIR MEMORIES

Dementia is an umbrella term used to describe a range of progressive neurological disorders (those affecting the brain) which impact memory, thinking and behaviour.

There are many different types of dementia, of which Alzheimer’s disease is the most common.

Some people may have a combination of types of dementia.

Regardless of which type is diagnosed, each person will experience their dementia in their own unique way.

Dementia is a global concern but it is most often seen in wealthier countries, where people are likely to live into very old age.

HOW MANY PEOPLE ARE AFFECTED?

The Alzheimer’s Society reports there are more than 850,000 people living with dementia in the UK today, of which more than 500,000 have Alzheimer’s.

It is estimated that the number of people living with dementia in the UK by 2025 will rise to over 1 million.

In the US, it’s estimated there are 5.5 million Alzheimer’s sufferers. A similar percentage rise is expected in the coming years.

As a person’s age increases, so does the risk of them developing dementia.

Rates of diagnosis are improving but many people with dementia are thought to still be undiagnosed.

IS THERE A CURE?

Currently there is no cure for dementia.

But new drugs can slow down its progression and the earlier it is spotted the more effective treatments are.