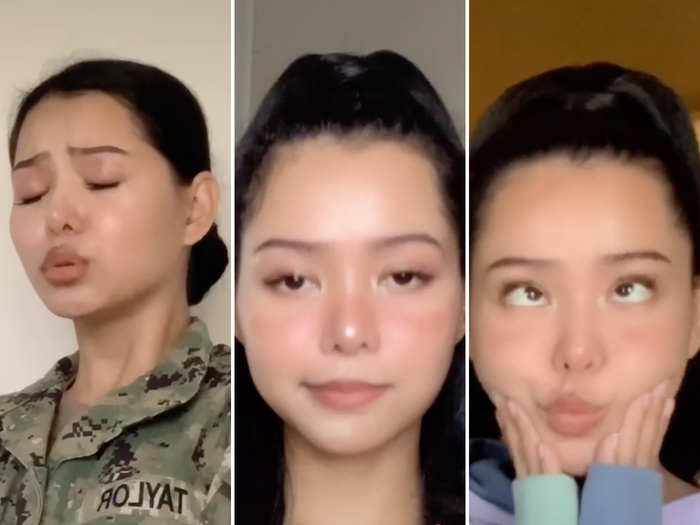 To some, it feels TikTok star Bella Poarch came out of nowhere.

The creator, most famous for her hypnotic lip-sync videos, became an online sensation after a zoomed-in video of her lip-syncing and rhythmically bouncing went viral. That video, posted on August 17, went on to become the most-liked video on TikTok less than a month later, per In The Know. Now, approximately two and a half months after it was originally posted, the video has over 41 million likes and half a billion views.

In the months since posting that original video, Poarch has become one of TikTok's most popular stars with over 40 million followers despite her earliest video only dating back to April 2020. Her Twitter account also appears to have been created in April 2020, and a YouTube channel bearing her name and approximately 172,000 subscribers was launched in March 2020. On Instagram, where she has approximately 7.4 million followers, her earliest post dates back to December 2016.

Poarch's brand on TikTok is built on a foundation of cuteness with a sprinkle of gaming and other kinds of content. Like any major TikToker, controversies have followed her as well.

Poarch's first TikTok video, which has 1.5 million likes and 21.7 million views to date, was posted on April 10. In the video, Poarch holds a controller and wears a green gaming headset, while an insult-laden audio sound plays in the background. The video has a caption that says, "Playing online for the first time be like…"

Poarch continued to post videos, many of them gaming-focused, with a smattering of lip-sync and dance challenge videos as well. The majority play into the cute-focused aesthetic that Poarch has since made an integral part of her brand. Others feature a stuffed animal named "Paca."

She first went mega-viral with her 'M to the B' video, which became the most liked video on TikTok

Poarch's biggest claim to fame is a lip-sync video to a diss track now officially titled "M to the B" from British artist Millie B. Her video, which features precise facial movements and some chill bouncing, blew up on TikTok in an unprecedented way. To date, it has over 500 million views and approximately 41.5 million likes.

That post is still the most-liked on TikTok, and it was what catapulted Poarch into superstardom. It also sparked backlash, with people in the comments of the video questioning why it had so many likes.

While Poarch continued to make lip-sync videos after her viral success, she also made dance videos, singing posts, and other types of content

In the month of so following the viral success of Poarch's "M to the B" video, she continued to post a variety of videos in the same style, lip-syncing and using TikTok's Face Zoom effect. In several of the videos she credits @afiqhakim for inspiration.

Heres my video again. Sorry I got nervous and took the other one down, Some days, I hate my voice😔

Questions remain regarding Poarch's legal name and age, neither of which she appears to have specifically addressed on social media

While Poarch has become famous under the name "Bella Poarch," her Facebook page, which has over 75,000 follows (but just four friends), is found under a URL ending in "TaylorNariee." As InTheKnow reported, a 2018 photo posted on Poarch's Instagram account shows her in a uniform that bears the name "Taylor." That suggests that "Bella Poarch" may not be her real name, but Poarch doesn't appear to have addressed it on any of her public social media accounts.

Poarch's age is also unclear. PopBuzz reported that, based on Instagram and Facebook posts marking the star's 18th birthday, Poarch should be 19 years old. However, Insider was unable to independently locate the posts in question, and they may have been deleted.

Famous Birthdays, a website that acts as a sort of index for internet-famous celebrities, says that Poarch was born on February 8, 1997 in the Phillippines (Poarch has spoken publicly about being Filipino). If that birthdate was accurate, Poarch would currently be 23 years old.

Poarch has also posted on social media claiming to have served in the United States Navy, with Instagram posts appearing to date back to 2017. Her Instagram bio also reads "US Navy Vet," and Poarch has posted TikTok videos that show her in uniform. If Poarch was born in 2001, she would have been 16 at the time — you must be 17 years old to serve in the Navy.

Poarch's biggest controversy came from a tattoo reminiscent of Japan's "rising sun" flag. Similar to Japan's flag, the rising sun flag features a red circle, but also includes 16 rays emanating from it. As CNN reported, to many South Koreans, the flag is a symbol of Japanese imperialism.

The Washington Post reported that the flag was one of war, and became the official war flag of the Imperial Japanese Navy in 1870. The flag is heavily linked with Japan's colonization of the Korean peninsula in the early to mid-1900s. Today, the flag remains a controversial symbol, and South Korea asked Japan in 2019 to ban the flag from the 2020 Tokyo Olympics.

Poarch has addressed the tattoo on multiple social media platforms. An apology posted on TikTok drew ire for its use of the "pleading face" emoji, which features a cute expression and large eyes.

##greenscreen Here is a photo of my arm tattoo. I love Korea🥺😭 I would never do anything to hurt anyone.

Poarch also tweeted about the tattoo, writing on September 5 that "didn't know the history" of the symbol and "immediately had it covered and scheduled for removal" when she found out. On October 11, she tweeted that a lot of people had been asking her about "the tattoo," saying that it had been covered.

In September, Bella Poarch and rapper Tyga posted videos that showed the two of them together, making videos in person. In one, they lip-synced to Tyga, Saweetie, and YG's song "Money Mouf;" in another, they "hit the woah without hittin the woah," referencing a popular dance on the app.

After they posted videos together, rumors spread that an NSFW video of the two had leaked online from Tyga's OnlyFans, which he announced that he was launching just days before he and Poarch posted videos with each other. The alleged leak hasn't been addressed by either party, and as Heavy reported, there doesn't appear to be any evidence that the clip exists or that the pair are dating.

As In The Know reported, Poarch was also accused of making a racist statement in a Facebook post that appears to have since been deleted or restricted but is still available via a screenshot she posted on Twitter. The original post shows Poarch and a man she refers to as "Harambe," the name of a gorilla who was killed in 2016 after a 3-year-old boy climbed into his enclosure.

Monkeys and gorillas have a history of being used as racist pejoratives.

In a Facebook post addressing her original post, Poarch wrote, "y'all really trying to cancel me for calling my friend Harambe! That was his nickname back when we were stationed in Japan." Online commentator Def Noodles posted screenshots that appear to show Poarch replying in the comments of a TikTok video saying that her friend is Samoan and that his military nickname came from him being "big and always very protective."

The Daily Dot reported that a viral video posted on TikTok in October posited a theory that Poarch had made a personal sacrifice for her following by selling her soul to the Illuminati. Given Poarch's rapid rise to fame, as well as others floating the accusation that she's an industry plant, people are more than happy to theorize.

A viral video from TikTok user @larissadenisee with over 950,000 likes posits the theory that Poarch sold her soul to the Illuminati, saying in a second part that a photo of Poarch with devil horn makeup was "literally taken a month before she blew up." The video that @larissadenisee appears to be referencing was posted on April 30.

The comments on both of @larissadenisee's videos are currently turned off.

The video speaks to people's desire to unravel the secret behind Poarch's meteoric rise. As BuzzFeed News reported, her success is more likely due to a combination of people enjoying looking at "attractive faces" as well as the novelty of the face zoom, lip-sync style.

Insider did not immediately receive a response to a request for comment on this story sent to the business email address listed on Poarch's social media profiles.

New Girl’s Lamorne Morris Shows Off His L.A. Bachelor Pad — and Sweet Tribute to his Co-stars!