The NRL will demand a multi-million-dollar compensation payment, to be invested in boutique suburban stadiums, should the NSW state government fail to deliver the rebuilt Allianz Stadium on time.

Despite previous assurances the new venue at Moore Park would be ready by early 2022, the NRL has now been told construction is already six months behind schedule. 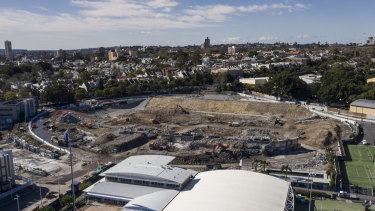 Construction site: The Allianz Stadium site in December. The NRL has been told work is already six months behind schedule.Credit:Brook Mitchell

Now the game faces the prospect of losing millions by potentially playing State of Origin and the NRL grand final at the Sydney Cricket Ground in 2022, with ANZ Stadium expected to be out of play from July this year until the start of 2023.

ARLC chairman Peter V'landys has stated his desire to lobby for funding for suburban grounds, and revelations of the delay to the Allianz Stadium works will provide the NRL with an opportunity to leverage the state government into stumping up cash.

V'landys wants to see tribalism return to rugby league, and this column understands discussions have taken place regarding the construction of several 15,000 to 20,000-seat boutique grounds around Sydney.

Manly, Campbelltown, Penrith and Sydney's south have been earmarked as primary targets, with all nine Sydney clubs to be catered for as part of the NRL's grand plan.

The governing body would much prefer fans being locked out than empty grandstands, hence the desire for boutique grounds to cater for crowds of around 15,000.

It's a significant change in tack. Just a few years back, the NRL adopted a 'build it and they will come' mentality in regards to major stadiums and turned a blind eye to suburban grounds.

As reported by The Herald in December, the delay could also see the Sydney Cricket Ground host the Origin match that had been earmarked for Allianz Stadium in 2022, as well re-open the debate around the grand final leaving Sydney.

While NRL chief executive Todd Greenberg has a strong relationship with NSW premier Gladys Berejiklian, V'landys' bullish approach has the ARLC chairman on a collision course with the state leader.

The game's stadium strategy, as well as the current broadcast negotiations, will be significant in defining the V'landys legacy. Be assured, the chairman is already positioning himself as the man who will turn dilapidated suburban grounds into modern stadiums.

There had been a fair bit of chatter out of NRL headquarters in recent months about the future of the All Stars concept, with question marks over its commercial viability going forward.

The NRL recognises the significance of the fixture, but there's no doubting a far greater emphasis is being placed on the bottom line at the NRL under the Peter V'landys regime. 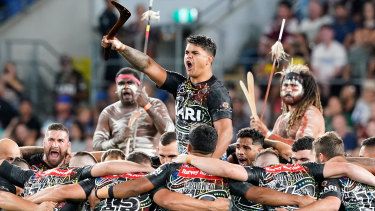 Latrell Mitchell at the centre of the Indigenous All Stars war cry prior to their clash with the Maori.Credit:AAP

The All Stars revival last season – which saw the match revamped to include a New Zealand Maori team instead of a combined World All Stars XIII – had only been given a two-year commitment after it was brought back in 2019.

While this column was led to believe its future hinged heavily on the success of the match on the Gold Coast, the NRL insists that it made a commitment to including it in its pre-season calendar again next year prior to the match at CBus Super Stadium.

A crowd in excess of 23,000 – the largest on the Gold Coast since Jarryd Hayne debuted for the Titans in 2016 – and an increase in television ratings by almost 20 per cent justified the governing body's decision.

The uplift in interest also coincided with a week of positive media coverage, in particularly by an Indigenous All Stars team that placed far more emphasis on spreading the word and building hype than they had 12 months earlier.

Discussions are well under way to lock in the 2021 fixture, with the soon-to-be-opened new stadium in Townsville leading the hosting candidates.

Interestingly, the NRL had an arrangement with the Queensland Government to play the All Stars match as the first game at the new stadium this year, however the North Queensland Cowboys were strongly opposed to the idea.

The Cowboys, who wanted to open the stadium, then had to convince the Queensland Government to relocate the game and the decision to move it to the Gold Coast proved fruitful.

New Zealand Maori officials are desperate to take the fixture across the ditch, but that will require some assistance from Auckland Tourism and won't happen until at least 2022.

Nine in frame for Wimbledon rights

Wimbledon officials were in Australia over the summer to discuss their future broadcast deal, meeting with Channel Nine powerbrokers about the rights for 2021 and beyond.

As it stands, Channel Seven, who lost the rights to the Australian Open to Nine last year, still have the rights to Wimbledon in 2020. 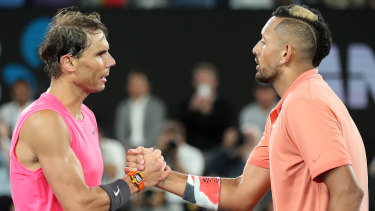 Just don't be surprised if Nine makes a play. Seven offered Wimbledon to Nine in exchange for the Ashes last year, but understandably negotiations didn't get very far.

But on the back of a mammoth summer of ratings, particularly impressive numbers around Nick Kyrgios, noise is being made about Nine coming to the negotiation table with Seven.

It would be a welcome change at head office, with one Tennis Australia official describing the prospect of dealing with Seven again as "getting back into bed with your ex".

A number of NRL clubs, including the Roosters, have been asking questions about All Blacks player Ardie Savea and whether his interest in playing rugby league is genuine.

The reality is that regardless of how good a rugby player he is, clubs are worried about taking a  risk and offering top dollar to a player untried in top-level rugby league.

Having spoken to a number of clubs, it's likely Savea would have to settle for $500,000 at best, which is well below what he stands to earn in his new deal with the NZRU. 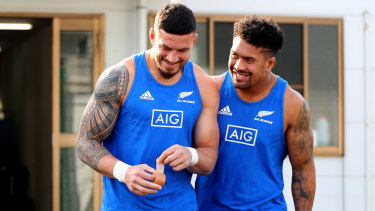 Savea could earn in excess of $1 million next year. There's also talk about a potential sabbatical to play in Japan for another $1 million – and that's before you consider the assembly money, sponsorship deals and marketing fund bonuses he can earn from the NZRU on top of his salary.

Savea is managed by veteran agent Warren Alcock, who won't be backwards in coming forward about what he would have to sacrifice to play in the NRL.

Savea wants to win a premiership and has identified the Storm and Roosters as his desired targets. They've done some homework on him, but it's hard to imagine him joining any club unless he's willing to forego plenty of coin.

Te'o rides back into town at Broncos

Ben Te'o raised a few eyebrows when he lobbed at Brisbane Broncos headquarters last week. Te'o was in town with the Sunwolves ahead of the Super Rugby clash against the Queensland Reds, returning to his old club to catch up with some mates. 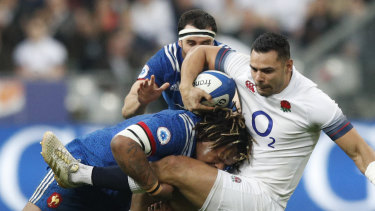 Interestingly, the Sunwolves are expected to finish their campaign by the end of May – which opens a window for Te'o to return to his old club prior to the June 30 deadline for a cameo stint.

Brisbane have a huge opinion of the player and there are people at the club who would love him to finish his career as a Bronco, but the money on offer to play Japanese rugby after the Super Rugby season would prove difficult to resist. At least this year, anyway.

Dogs don't want to get paws on Griffin

Speaking of raised eyebrows, there were more than a few in the room at Wests Ashfield last week when former Panthers coach Anthony Griffin was spotted sitting alongside Canterbury Leagues Club and football club director Paul Dunn, as well as Leagues club chairman George Coorey, at a Grade Cricket luncheon.

We love a good conspiracy theory, but there isn't one here. This column has been assured Griffin wasn't a guest of the Canterbury duo, and that his presence was just a coincidence that had nothing to do with the fact Bulldogs coach Dean Pay is off contract at the end of this season.

The Newcastle Knights were somewhat underwhelmed with the list of candidates that applied for the head of football job vacated by Brian Canavan.

It's hard to know whether the way the club handled Nathan Brown's exit last year contributed to the quality of applicants, but it forced the Knights to go out and head-hunt their man.

They went after highly regarded Cowboys head of football, Peter Parr, who hails from the Hunter and has overseen the successful NSW State of Origin resurgence under Brad Fittler the past two years.

Although the Knights didn't have to look too much further, coming to an arrangement to bring Danny Buderus back home despite the club's former captain walking out on the Knights' football advisory committee following the treatment of Brown last year.

There was a fair bit of criticism of Michael Maguire's coaching style in some sections of the media towards the end of last year in regards to his reputation as tough trainer. 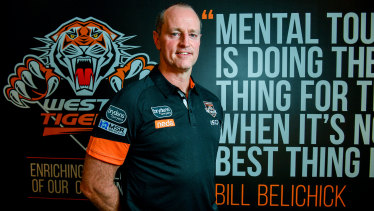 Mental toughness: Michael Maguire has started to change his ways at the Wests Tigers.Credit:AAP

Sun-Herald columnist Danny Weidler last year reported there were some safety concerns for the players given the way Maguire likes to train, but this column has been told there have been significant changes in Tiger town over the summer.

The acquisition of high-performance director Andrew Gray, as well as some more medical experts, has not only allowed Maguire to focus more on coaching, but has also helped with the workload management of his players.

Warriors hope to beef up squad

The New Zealand Warriors are hopeful of announcing the recruitment of Ben Murdoch-Masila next week, with the Tongan international set to sign a three-year deal from 2021.

The Warriors have also moved to lock up Jamayne Taunoa-Brown, the Melbourne-born forward who was a surprise call-up into the Indigenous All Stars team, after he was brought to the Warriors on a trial-and-train contract.

It appears high-profile Wests Tigers recruit Adam Doueihi will have to bide his time off the bench to start the NRL season, with Corey Thompson set to be given first crack at the No.1 jersey.

Billy Walters has also got one hand on the No.9 jersey, leaving coach Michael Maguire with a tough decision over what to do with Josh Reynolds.

There's no doubt the Tigers could do with Reynolds' energy, something they missed last season, but the former South Sydney coach prefers big bodies on the bench.

Talk about awkwardness. NRL executives are well and truly off departing players association boss Ian Prendergast, so you could imagine the atmosphere when he squeezed into the backseat of their rental car for the 30-minute drive from Merimbula to the hotel in Tathra at the weekend. In the car was Todd Greenberg, chief commericial officer Andrew Abdo, chief corporate affairs officer Liz Deegan and the general manager of media and communications, Daniel Meers.

There needs to be an investigation

Can someone explain what wily Wayne Bennett was doing when he was caught on cameras caressing Liam Knight's chest at half time of the Charity Shield? Perhaps he's looking to stay on at Souths beyond 2021 … as the team physio.

Every sinew came together

Everything appeared to work seemlessly with the captain's challenge out at Mudgee on Saturday – that is unless you are the Rabbitohs, who butchered their referral. Expect the NRL's latest innovation to get the final stamp of approval for round one within the next 48 hours.

That's not a try, that's a miracle

The Wests Tigers didn't count on seeing injured hooker Jacob Liddle for all of 2020, such was the extent of his horrific knee injury. But Liddle is determined to defy the odds and is already running on the anti-gravity treadmill and is now expected to return after the State of Origin period.

Everything you need to know about winter surfing in the UK