Home » Lifestyle » I had afternoon tea at London's iconic Claridge's, and it was worth every bit of the $120 I spent

Afternoon tea is the most British of British institutions.

Genteel and civilized, it was created by Anna, the seventh duchess of Bedford. She got so peckish during the afternoons that she created the ritual of having a cup of tea and a snack at around 4 p.m. After she began inviting friends to join her in availing themselves of some delicate sandwiches and perhaps a scone or two, the trend spread like wildfire.

An almost entirely carb-based meal, it's not the kind of thing you eat every day, making it perfect for a special occasion — and where better to enjoy an entirely unnecessary and joyful meal than Claridge's?

Britain's 208-year-old venerable hotel has seen everyone from Queen Victoria to Audrey Hepburn walk through its revolving doors, so I went to check out whether its afternoon tea is as fabulous as it's made out to be.

In order to do so, I reserved my table 90 days beforehand online — this isn't a turn-up-and-see-if-there's-a-spot-at-the-bar kind of joint.

Located in the heart of Mayfair's quiet, wide streets, Claridge's is a beacon of old-fashioned glamour.

Its red brick front looks as pretty as a picture.

This was nothing compared to the lobby, however. 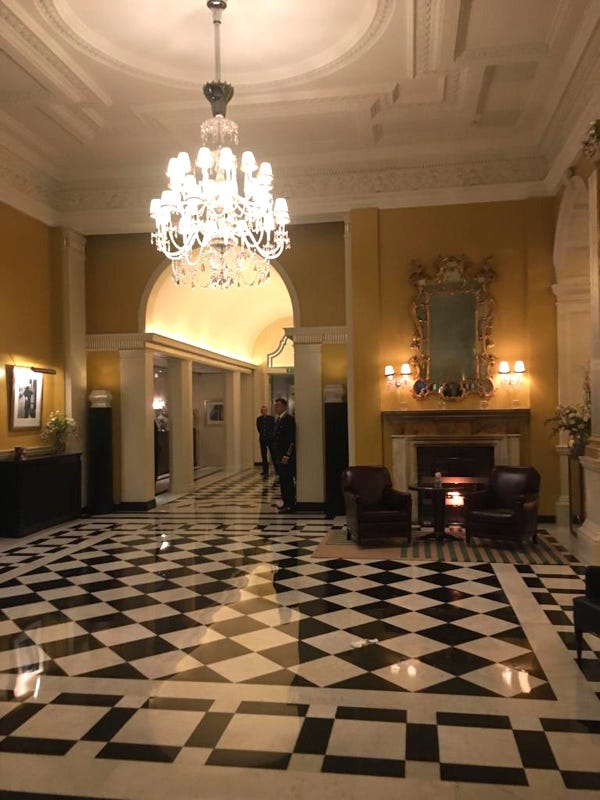 A beautiful black and white marble floor shone underfoot, ornate chandeliers hung from the ceiling, and comfortable leather chairs stood invitingly next to an open fire. This is one hotel lobby you wouldn't mind waiting in for your room to be ready.

The foyer and reading room, where tea is served, is directly across from the front doors. 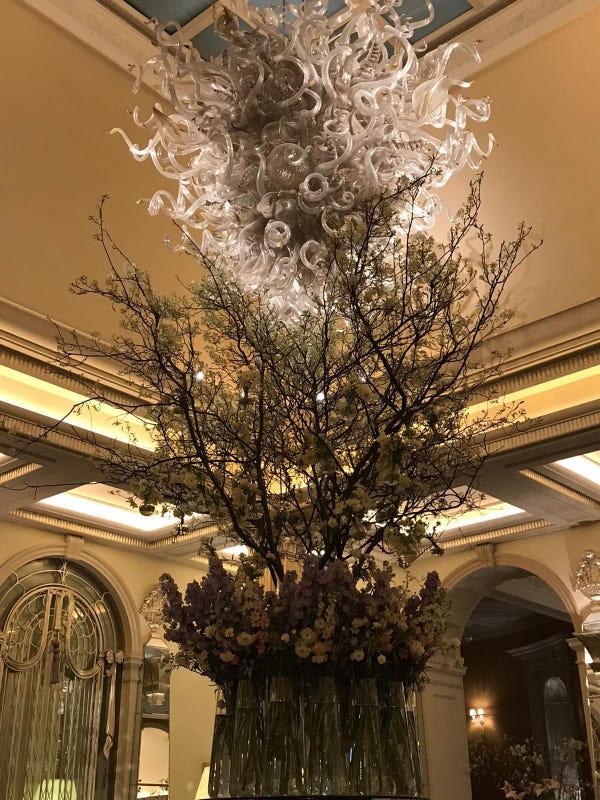 The chatter and laughter spilling out, along with the welcoming smiles of the hostesses at the entrance, made it look very inviting.

I was seated in the main foyer in the corner, with a view of the whole stunningly gorgeous room.

It was like sitting in a film set. Everything was polished and gleaming, illuminated by soft glowing light. The carpet was thick and luxurious underfoot.

The table was set perfectly — it looked as though the cutlery had been placed according to a ruler. 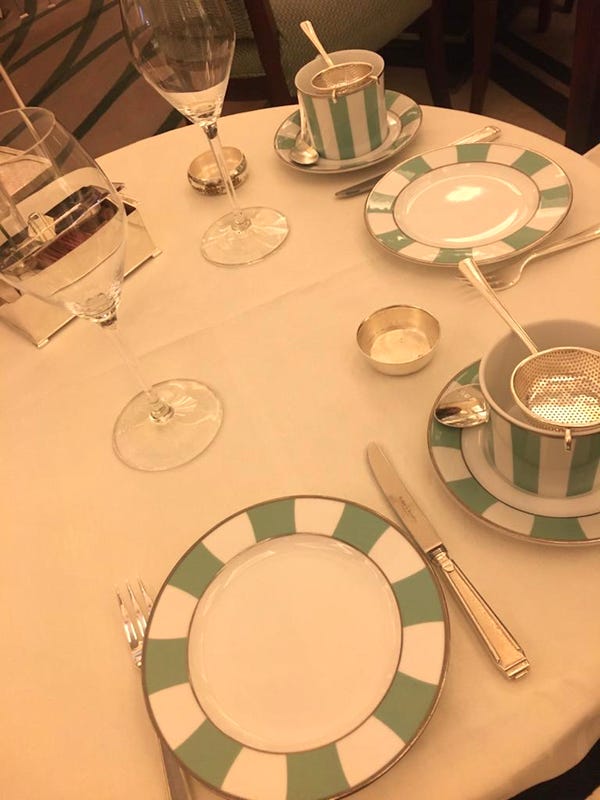 Looking around at the people dining in the same room, it was a surprisingly mixed variety of customers. There were some mother and daughter duos, pairs of female friends, and a few whole families out to enjoy tea together. Everyone was welcomed and treated exactly the same.

After an exceptionally courteous waitress checked that I was indeed there for afternoon tea, the ceremony began. 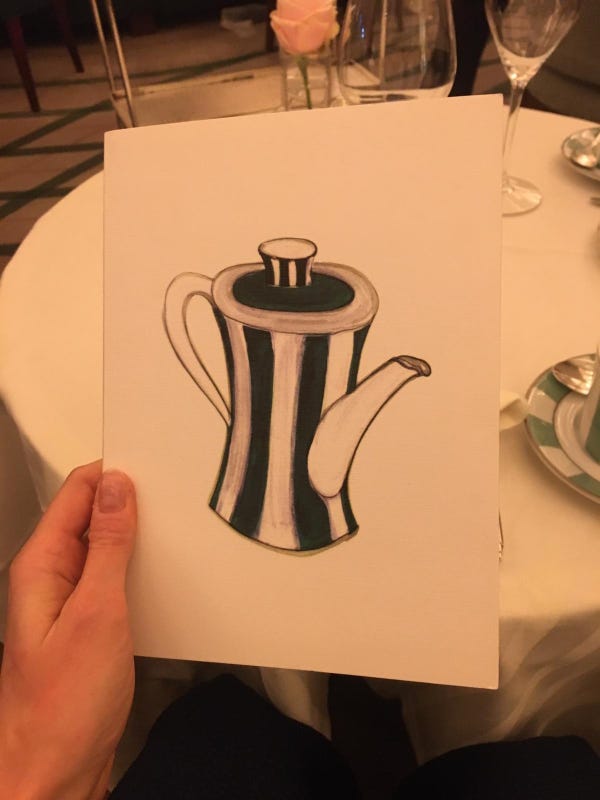 Claridge's has been serving tea for many years, and they have it down to a fine art.

They have menus for the traditional tea which you can choose to have with or without Champagne, as well as menus for vegans, children, and the gluten intolerant.

Firstly, I chose my tea. After asking for advice, I went for the Claridge's blend, an English Breakfast tea. 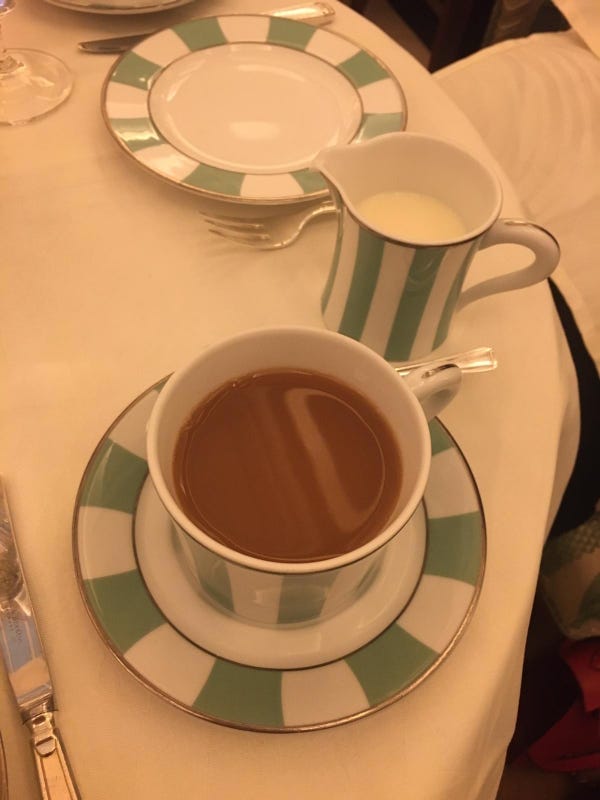 It can be taken with or without milk. I tried it both ways, and found it hard to choose a favorite.

Not wanting to miss out on a single part of the tradition, I also opted for the Champagne tea, paying an extra £10 for rosé Champagne. 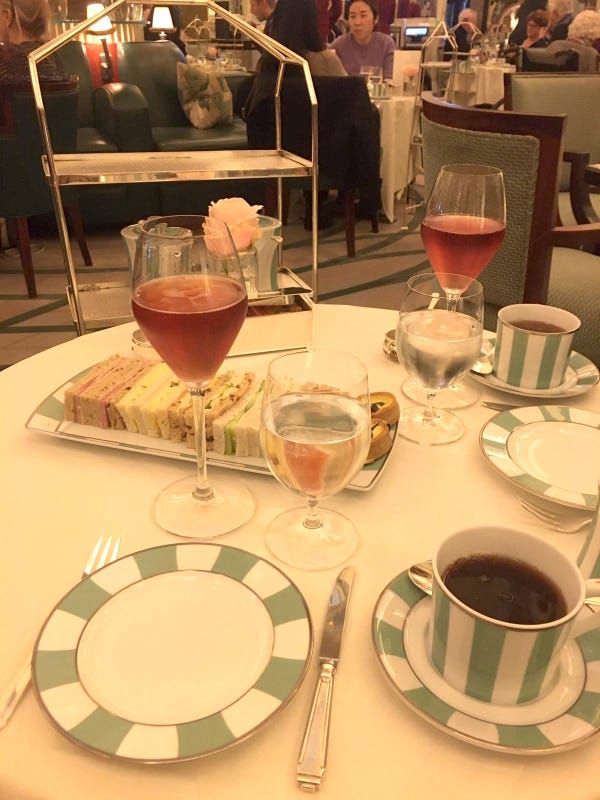 After all, how often is it that you spend an afternoon being waited on hand and foot?

Food began to appear without any prompting from me — I felt as though the staff knew by magic what my heart desired. First up were finger sandwiches and a small cheese quiche called a savoury. 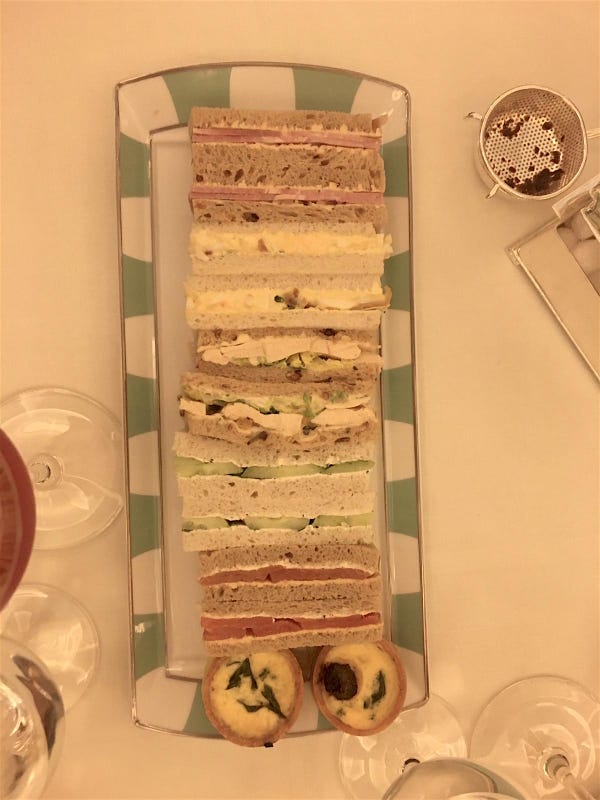 The waitress informed me that the sandwiches are specially designed just for the afternoon tea and are made by slicing a loaf of bread horizontally, to achieve the perfect size fingers. 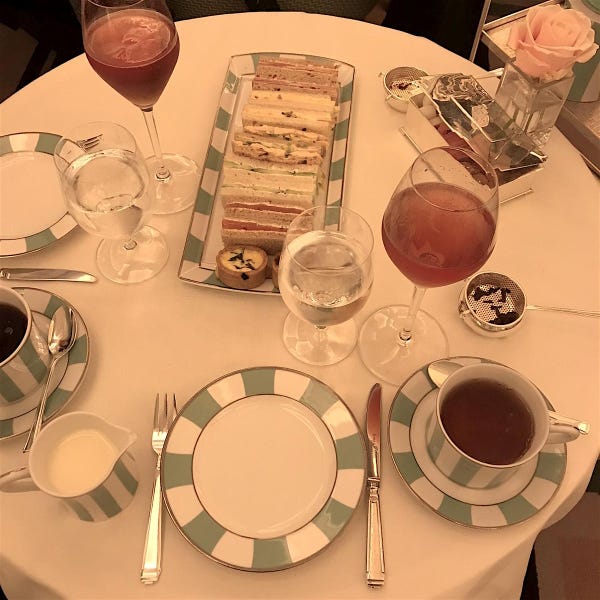 They embody the platonic ideal of a sandwich. You'll never view the quick cheese and pickle you grab from a chiller cabinet in the same way again.

Then the best part — they ask if you would like more sandwiches. 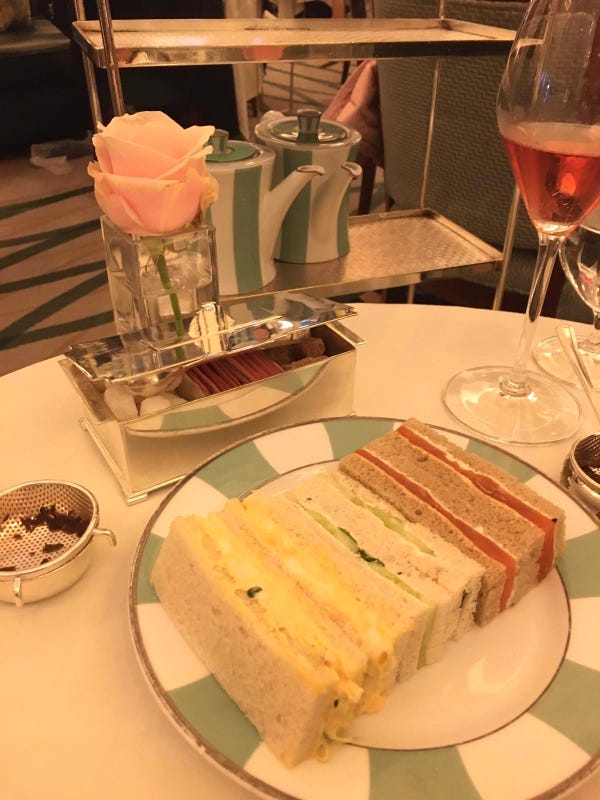 Which of course, I did. I chose to have repeats of my favourites — duck egg mayonnaise, cucumber, and smoked salmon.

While I was scoffing my sandwiches, my tea was refreshed no less than two times — so many people came by to see if my pot needed more water and to pour me another cup that I felt as if I would start to float. 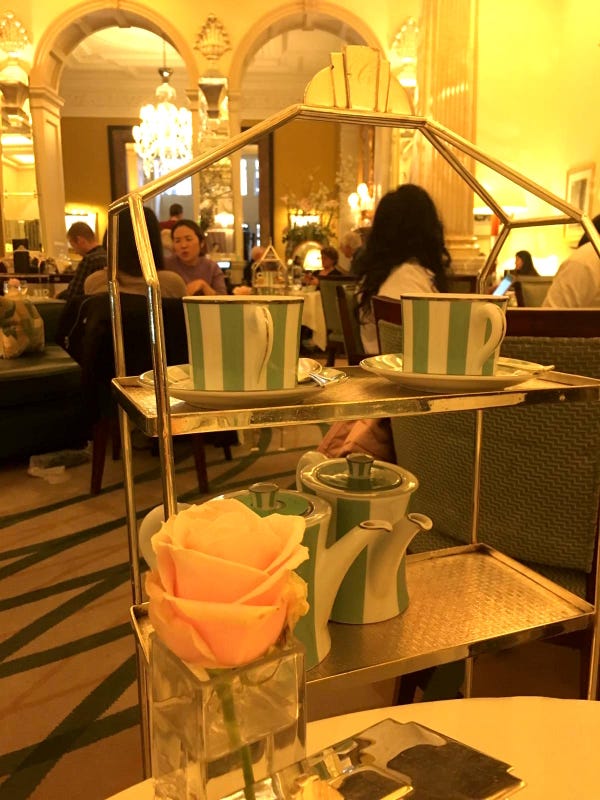 During a brief pause after the sandwiches were served, the waitress asked if I'd like to switch to a different kind of tea to enjoy with my scones. I chose a green tea, which she said would go exceptionally well with the flavors of the jam.

Before my scones could arrive, however, I went to see if the bathrooms were as beautiful as rumors suggested. 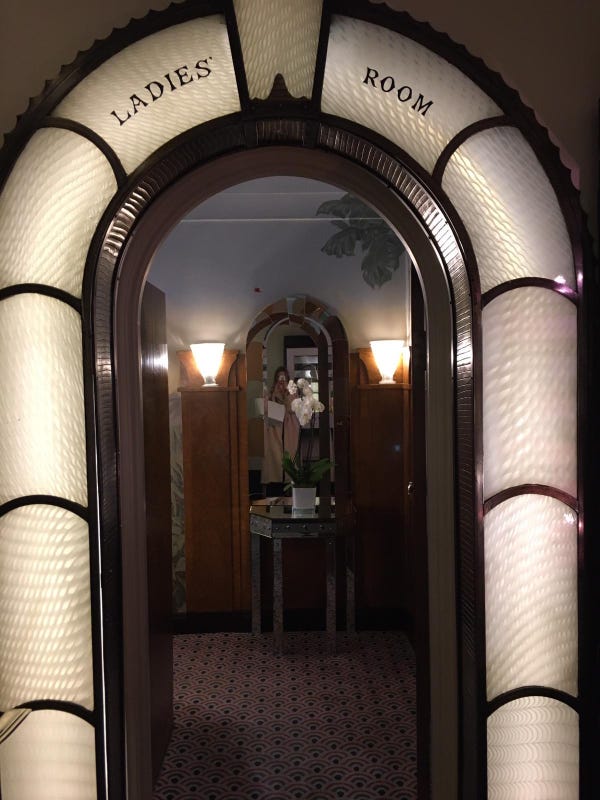 An art deco masterpiece, they're one of London's best spots to grab a selfie.

They were filled with marble and delicately painted tropical motifs, and were spotlessly clean. 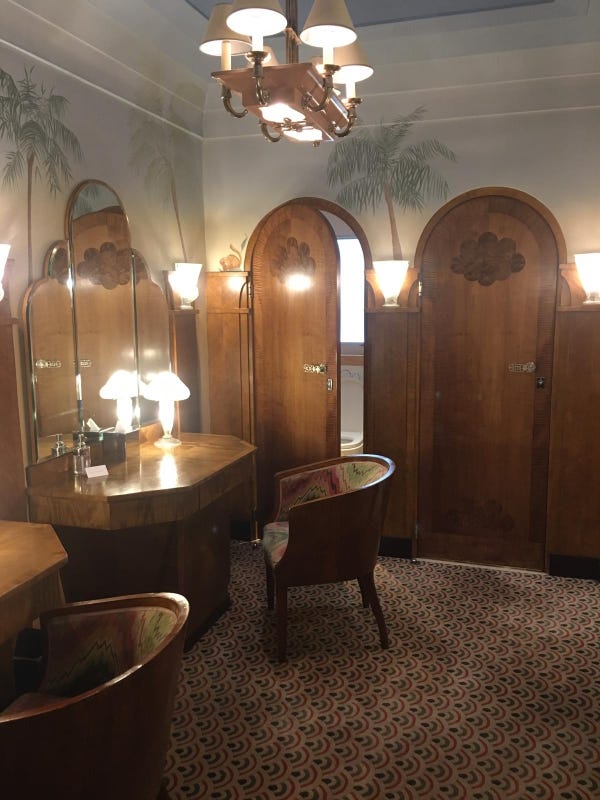 I can now confidently say that they're my favourite toilets in the capital.

Back at my table, a plate of fresh, warm scones were set before me. They came with jam and a generously-sized portion of clotted cream. 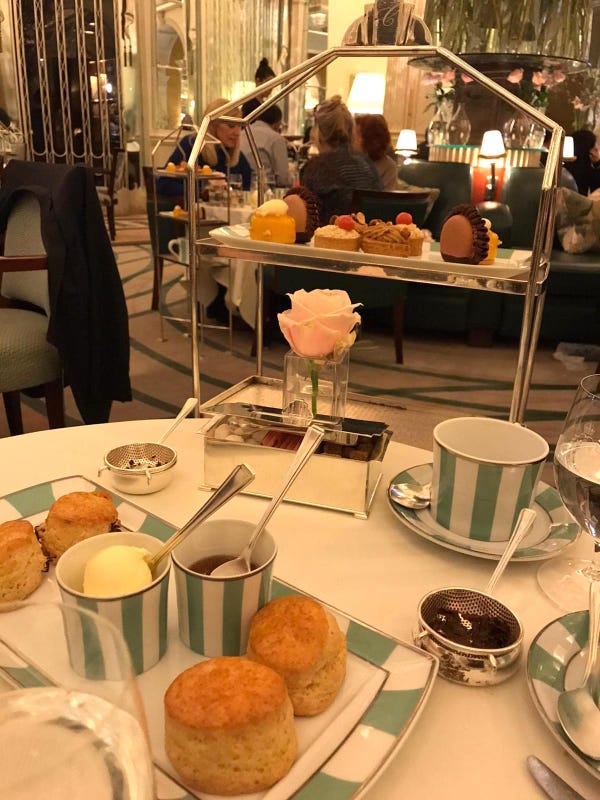 There's nothing quite like spreading thick, cold cream on a flaky scone morsel. It's something everyone should experience.

At this point, I was getting full — but there was still another round of treats to enjoy.

The cakes on offer change daily. I was served a chocolate macaron, a yuzu cheesecake, a rhubarb and crumble tart, and a caramel eclair. There was also a daily special of a chocolate and vanilla marble cake, covered in coconut.

If like me you're too stuffed to eat more than a paltry few bites of cake, the lovely waitstaff will send you home with whatever you can't manage in a chic beribboned box.

I had arrived at Claridge's expecting to have a good time, but I hadn't anticipated being spoiled rotten — or being looked after so carefully. 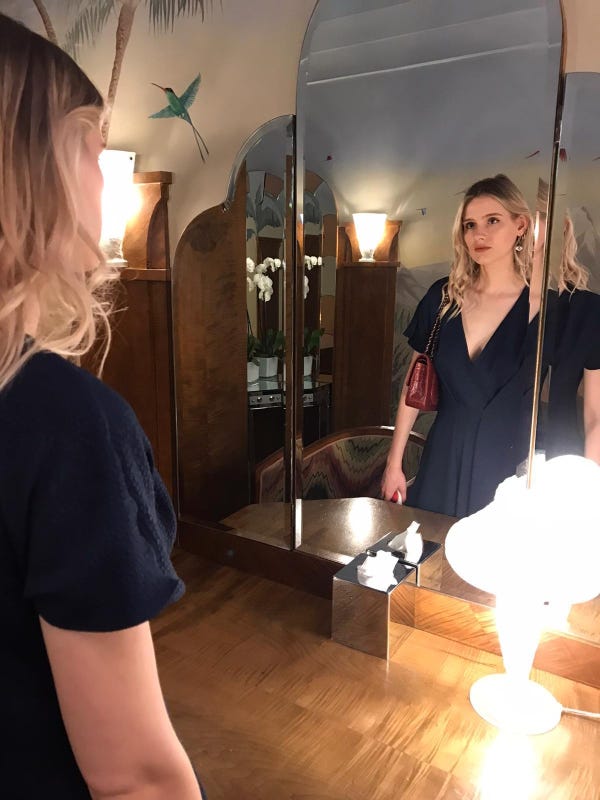 Before visiting, I had thought posh afternoon teas were outdated, but I was completely wrong.

It showed me it's worth indulging in tradition from time to time and trusting an institution that really knows what it's doing.

It might not be cutting-edge, but I would go back for afternoon tea at Claridge's in a heartbeat — the only thing I'd do differently would be to wear looser trousers.