I’m still ga-ga for Gucci! A new film retells the scandal behind Italy’s most glamorous fashion house. Superfan LIZ JONES has already bagged her place in the front row. And guess what she’ll be wearing…

So, 21 years ago, when I was editor of Marie Claire, I got wind of an explosive new book. It contained murder! Hit men! Ski resorts! Palazzos and prosecco! And, best of all, it contained gorgeous Italian clothes.

It was also, unfortunately, about the Gucci dynasty, which owned one of the biggest advertisers in my magazine.

But the story, of how, in 1995, an Italian socialite called Patrizia Reggiani was tried and convicted of orchestrating the assassination of her ex-husband, Maurizio Gucci, the former head of the fashion house, was too good to pass up.

I duly published an extract from The House Of Gucci: A Sensational Story Of Murder, Madness, Glamour, and Greed, only to be summoned to Paris to be hauled over the coals by the magazine owner. Gucci would be furious, I was told. 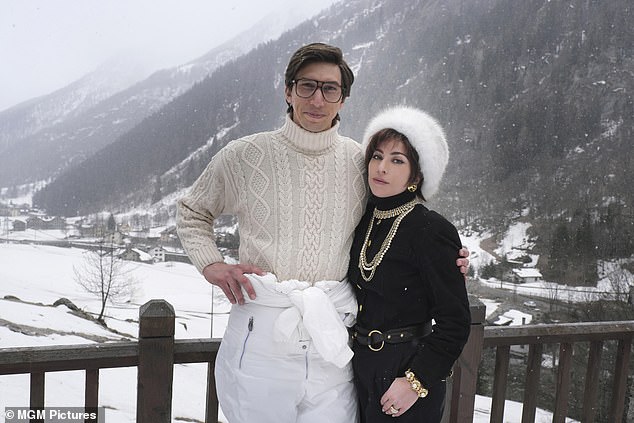 Explosive book The House Of Gucci: A Sensational Story Of Murder, Madness, Glamour, and Greed, has been made into a film starring Adam Driver as Maurizio alongside Lady Gaga as Patrizia. Pictured: Adam and Lady Gaga

Italian fashion brands are famously generous. A holiday off Capri on a yacht courtesy of Tod’s. Any outfit I desired straight from the catwalk; thank you, Alberta Ferretti. Handbags galore couriered to my hotel suite by Prada. But they could also be notoriously touchy.

However, after the book extract came out, there was not even a murmur of dissent from Gucci. I breathed a sigh of relief. That is, until Christmas, when my oddly shaped gift from the brand’s creative director, Tom Ford, arrived. I tore off the wrapper. It was… a lilo made of wicker? How odd. My executive editor’s hand shot to her mouth dramatically. ‘Gucci wants you to drooooowwwwn!’ she exclaimed.

Thank God Gucci had a sense of humour. Unlike pretty much all the other luxury brands, it was mischievous, particularly under the helm of the American Ford, who reigned from 1994 until 2004, and resurrected its image and fortunes. Remember, it was he who launched the advert depicting a woman’s pubic hair shaved into the iconic G logo. I imagine the Pope fainted.

The book that caused me so much angst has now been made into a film, which had its premiere this week. Lady Gaga stars as Patrizia and Adam Driver is Maurizio. Al Pacino emotes expansively as Aldo Gucci, chairman of the company from 1953 to 1986.

The film features the aforementioned fantastic clothes — Oscar-winning costume designer Janty Yates had the enviable task of choosing garments from the extensive archive, as well as Gaga’s own Italian grandmother’s clothes. Warning: there be fur.

As A fan of what I think is the greatest brand in the world, the film also has a line of dialogue that resonates with me: ‘Gucci is like a cake. You have a taste and you want more and then you’ll want the whole thing for yourself.’

Whereas Dior and Chanel are elitist, Prada cerebral, Alexander McQueen difficult and arty, and Dolce & Gabbana way too over the top, Gucci was — and is — the label for women who want to look feminine and quietly sexy. 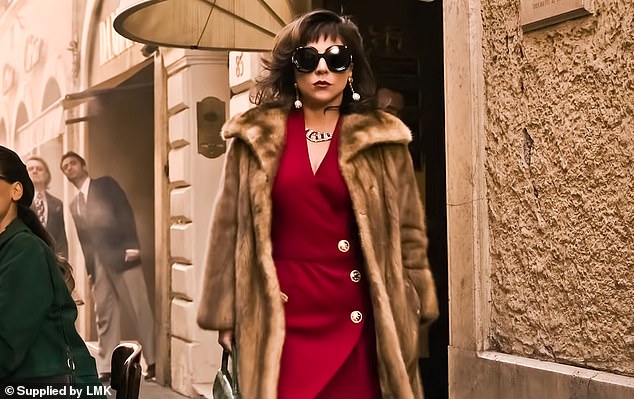 Liz Jones, who is a former editor of Marie Claire, said Gucci was — and is — the label for women who want to look feminine and quietly sexy. Pictured: Lady Gaga as Patrizia

‘There is no doubt who the Gucci woman is: the embodiment of sexual confidence, burnished to a high gloss and bursting with predatory power,’ trumpeted Vogue of the 2004 catwalk show. It was a look no grown-up career woman could resist then, and still can’t now.

My most vivid memories of fashion’s front row over the last 25 years have been at Gucci, particularly under Ford. Each season, his show would make you want to reinvent your wardrobe, and yourself. He started so many trends. For his farewell collection, he sent silk tracksuit bottoms down the catwalk, prefiguring athleisure. He gave us pyjamas as evening wear.

For spring/summer 1999, he elevated the humble pair of jeans to luxury status. That show was the one I remember most vividly. Each model was wearing jeans embellished with jewels and embroidery. The collection killed stone dead the minimalist, boring 1990s of Helmut Lang et al. Every single woman in the front row wanted a pair.

A Gucci runway outfit from that season — embellished jeans, little ruffled jacket — now sells for £14,000. I really wish I hadn’t put my Tom Ford denim in a hot wash.

My favourite Gucci look of all time? Kate Moss, with asymmetric blonde bob, in a corset dress beneath a black sheer curtain, and white booties, spring 2001. I still dream about that dress. How effortlessly hot she looked.

And, as well as the incredible clothes, there were the bags. Of course, the bag: Gucci started life, after all, as a humble luggage maker. Guccio Gucci had admired the luggage he saw arriving at the Savoy hotel in London, where he was a bellboy, and decided he could do better. He opened his first shop in Florence in 1921. 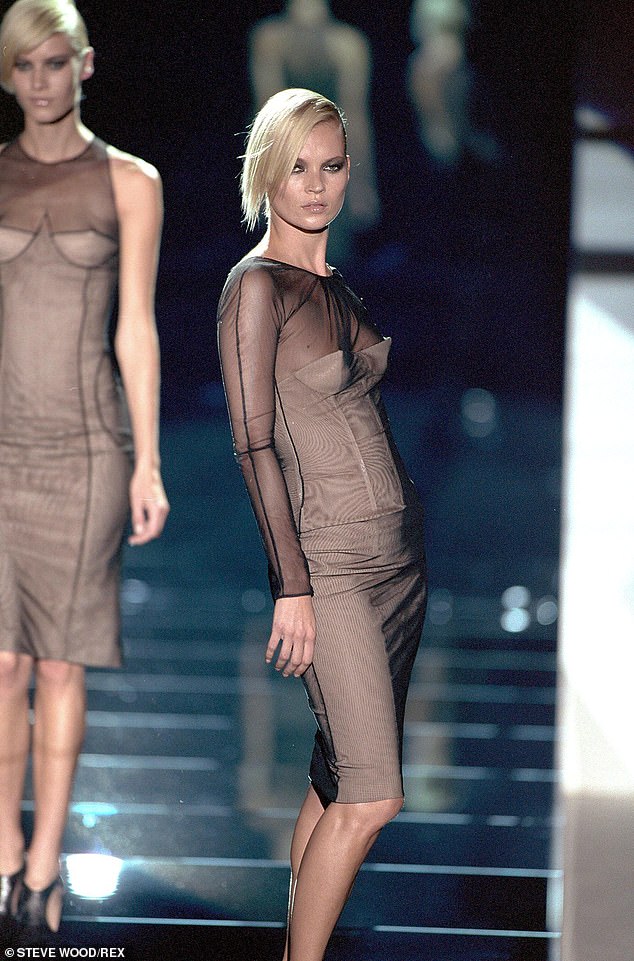 Liz said her favourite Gucci look of all time is Kate Moss, with an asymmetric blonde bob, in a corset dress (pictured)

With its unique diamond pattern, as well as the red-and-green striped webbing, the bags remind me of school uniform and girths on saddles.

The bamboo handle swiftly became another trademark: Liz Taylor carried hers in the 1950s.

The Jackie bag is still in production today, while Carrie Bradshaw frequently toted a Gucci: the ‘I love NY’ bag, the large ‘Joy’, the fanny pack…

The Gucci Diana, born in 1991, soon became a favourite of its namesake, Princess Diana. The bag was relaunched in July this year, with a neon strap designed to help it keep its shape: a small tote is £2,520.

Which brings me to the main reason Gucci has endured when so many other labels have floundered. The calibre of its customer. Gucci has managed to remain a label for those ‘in the know’. It’s subtle.

The Fendi baguette created queues when it launched, but Gucci lovers don’t do queues. Louis Vuitton holdalls are now ubiquitous on luggage carousels. Versace, with its safety pins and palm trees, is too obvious: comparing Versace with Gucci is like comparing Hollyoaks with Succession.

Add to that, of course, the fact that Gucci products are well-made. I still have the loafers with their red trim at the heel which I bought at the Milan flagship 22 years ago. Gucci doesn’t date; I still wear its brown silk ‘hanky’ skirt from 2003. The stretchy white shirt I bought in New York for £350 would still get me a pay rise were I to wear it to the office.

Back in 1996, Gwyneth Paltrow arrived at the MTV awards wearing a ruby red velvet suit, by Tom Ford at Gucci. Last Tuesday, she turned up for Gucci’s 100th birthday celebrations in Los Angeles wearing only a slightly updated version of the very same schmatter. A quarter of a century on, the lean tailoring still looks sharp, current. How many labels can claim that? 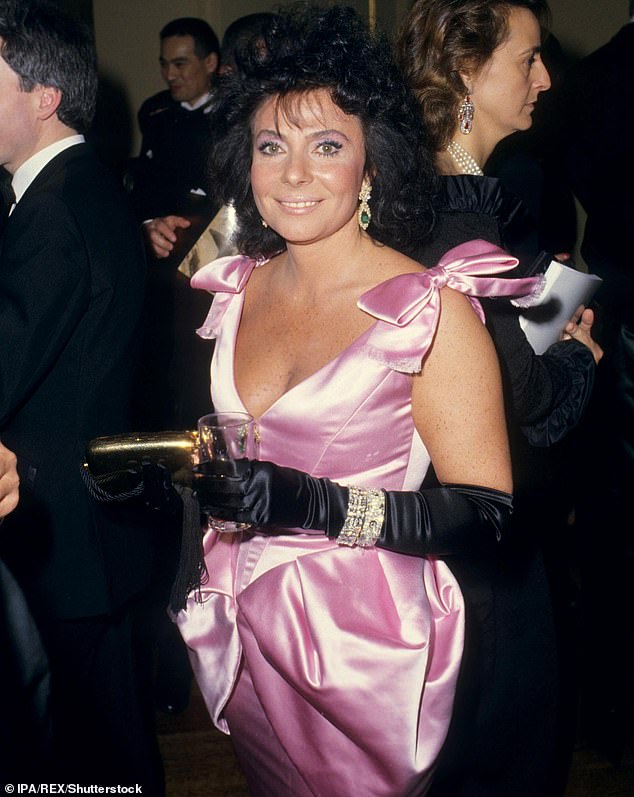 Liz said it’s surely not a coincidence that the House Of Gucci film will be released on Black Friday, the biggest shopping day of the year. Pictured: Patrizia Reggiani

In 2004, Gucci was bought by Pinault-Printemps-Redoute (now Kering). Tom Ford was out — hardened glossy editors were seen weeping — to be replaced by Frida Giannini: all very tasteful and low key. And now we have the maverick, trend-defying creative director Alessandro Michele.

He sent a topless model down the runway for spring 2020. He put models in straitjackets: hint, we must be mad to pay those prices. He makes slip dresses, slashed both down to the navel and up to the knicker. He is without doubt, according to American Vogue, ‘the most influential force in fashion’.

The catwalk show for spring/summer 2022 which, in a stroke of genius, cast Macaulay Culkin, an ‘extended’ or plus-size woman, and gorgeous models of indeterminate sex, showed that Gucci really is now the label of choice for red-carpet showstoppers.

Now, Michele has also seduced the all-important youngsters of Generation Z: Billie Eilish wore Gucci to the premiere of the new Bond film.

Consequently, he has sent the brand’s fortunes into the stratosphere. Only the pandemic caused a stumble: ‘The Gucci party is postponed’, a financial analyst wrote when the latest figures —sales rose only 3.8 per cent in the third quarter from a year earlier — were released last month.

It’s surely no coincidence that the film, which will spark interest in all things double G, is released here on Black Friday, the biggest shopping day of the year.

I end my love letter to Gucci with this fact. ‘Gucci’ has made it into urban dictionaries as an adjective — it means ‘good, chill, cool, awesome’. We all want to be that, don’t we? I rest my case.

House Of Gucci is in cinemas from November 26.