Home » Lifestyle » Influencer spends £2,600 to look glamorous for her cesarean

Mother reveals she spent $3,300 on clothes and makeup and walked into the delivery room for her Cesarean in 4-inch stilettos because she wanted to feel ‘sexy and glamorous’

A glamorous mother-of-two spent more than $3,000 so she could look her best when she went in to the hospital for her Cesarean section.

Emma Ford, 34, donned false lashes, four-inch stilettos and a ‘little black dress’ – carrying her baby supplies in a $363 Michael Kors handbag – for the moment she walked into Brookwood Hospital in Alabama in January this year.

The Instagram influencer even visited a luxury health spa in the days leading up to her planned birth so she could feel calm when she and her husband Samuel, 34, welcomed their son Solomon Kenneth Ford. 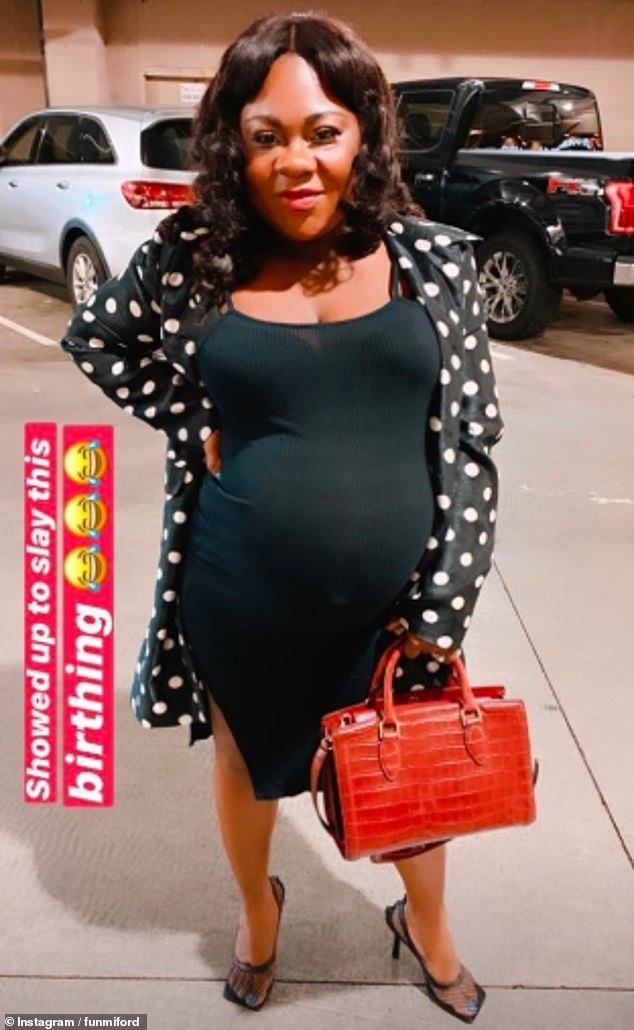 Emma Ford, 34, donned false lashes, four-inch stilettos and a ‘little black dress’ – carrying her baby supplies in a £300 Michael Kors handbag – for the moment she walked into Brookwood Hospital in Alabama on January 6 (pictured)

Emma said: ‘I love getting glammed up. I never go anywhere without makeup on and it was important to me – this time around – that I look and feel my best when having my baby.

‘It’s such a special moment and I wanted it to be perfect.’

Emma had her first born, Samuel, in November 2016 – but after a pregnancy riddled with minor issues, her health worsened.

Eight weeks after giving birth, she felt excruciating pain that turned out to be an ovarian torsion – a condition that occurs when one of the ovaries twists around the ligaments that keep it in place. 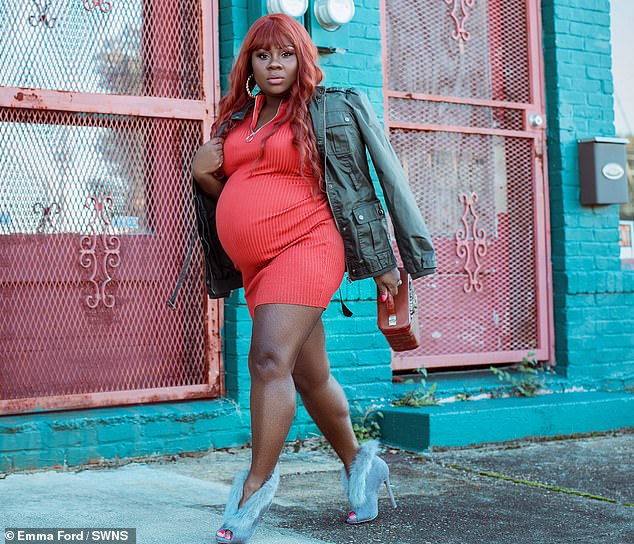 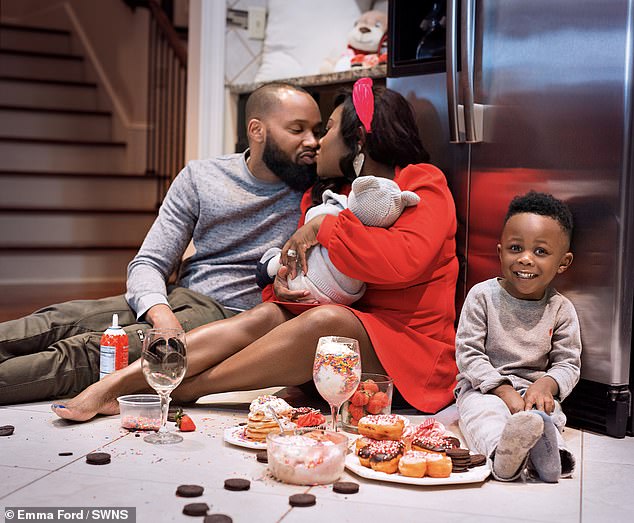 Emma had her first born, Samuel (pictured), three, in November 2016. The family are pictured enjoying a feast to celebrate their new arrival 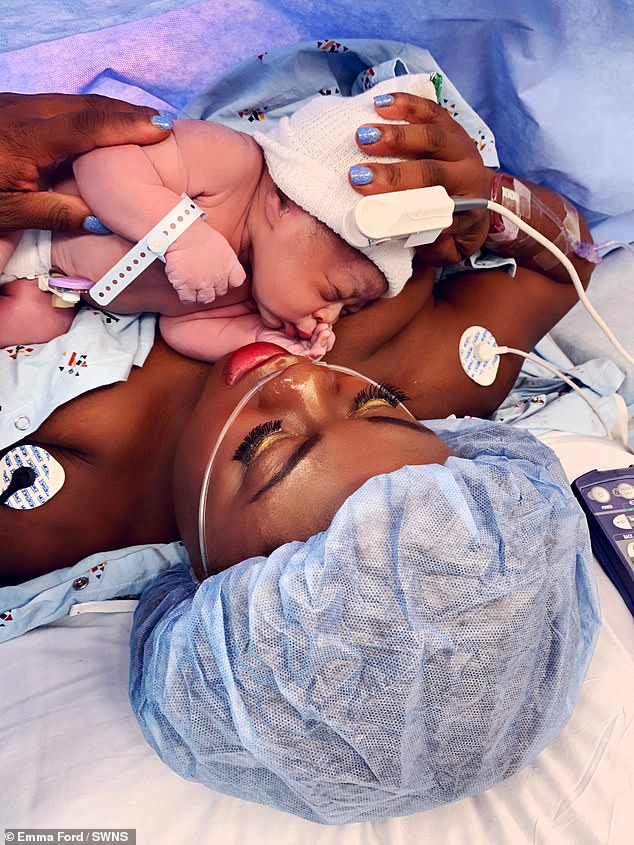 A week after strutting into hospital in her heels, she posted the incredible moment she met her baby for the first time (pictured) on Instagram, to the delight of her 34.7k followers

The fallopian tube and ovary had no blood supply, and the result was a sharp excruciating pain and Emma’s ovary being removed.

She added: ‘After my last pregnancy and birth was so horrific, I just wanted to enjoy this one. I wanted to make it more fun and to feel great.

‘When I had my first son, the birth ended up creating a lot of health problems for me, and about eight weeks after, I had to lose my right ovary.

‘When I was pregnant with Samuel, I suffered from a lot of minor health issues, that just made things generally harder along the way.’

She suffered from sciatica, severe acid reflux, heartburn and migraines during her first pregnancy four years ago.

She added: ‘It constantly got me down. The birth was fairly smooth-sailing, but I was so worried, it being my first, that I couldn’t relax and enjoy what should have been a beautiful thing.

‘Then, about eight weeks after giving birth, I started feeling horrific pain in my lower stomach. I rushed straight to the hospital, terrified about what the pain could mean.

‘The doctor told me I was suffering from ovarian torsion, which I had no clue about.’ 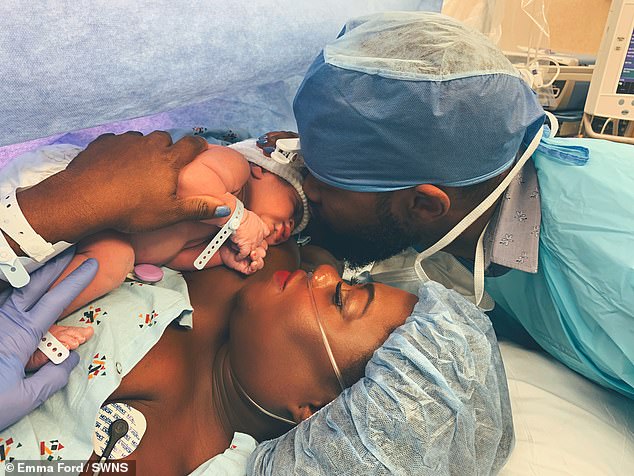 After her ovary was removed there was less chance of the couple falling pregnant again, due to a reduced egg supply.

So when they found out they were going to have a second child in April 2019 they were thrilled.

‘This time around, we stayed calm, which was easy, considering we had planned everything to a T. I wanted to feel sexy and glamorous, and show other mothers that they can feel that way too,’ she added.

‘I had worked throughout the entire pregnancy so I wanted my birth to be relaxing, and all about me and my baby.’ 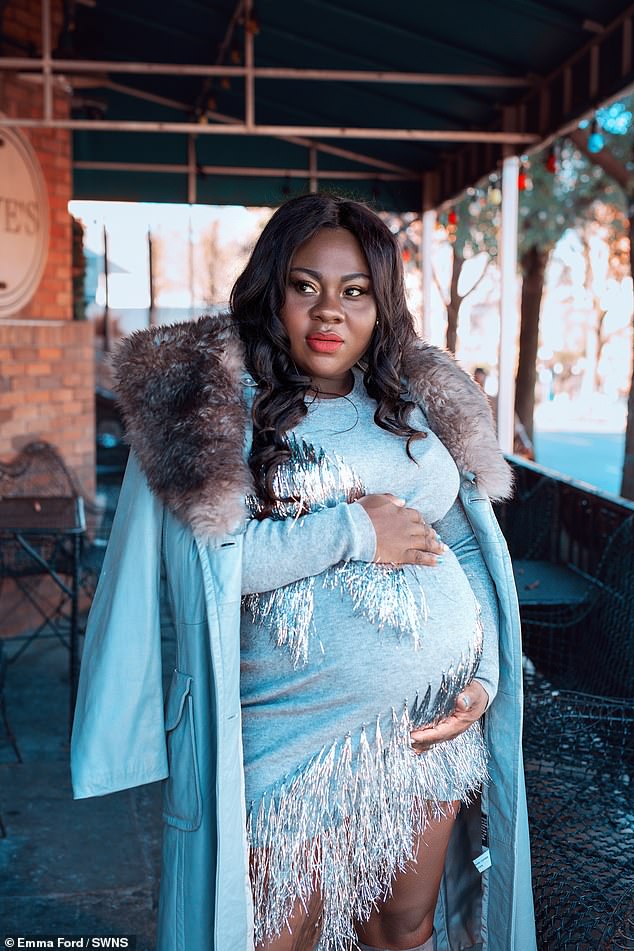 Emma, who used to work in car insurance sales, juggles raising her two sons while continuing to dress up and doing her daily full glam makeup look. Pictured during her pregnancy

Emma and Samuel wanted to make sure the second pregnancy was enjoyable, so took a babymoon to Florida.

‘I kept really fit and healthy all the way through, and dressed up even when I didn’t feel like it,’ Emma said.

‘I basically continued as normal, taking trips and preparing fun things for my baby.

‘We even took a mini babymoon to Florida so we could have some alone time as a couple before the chaos began. 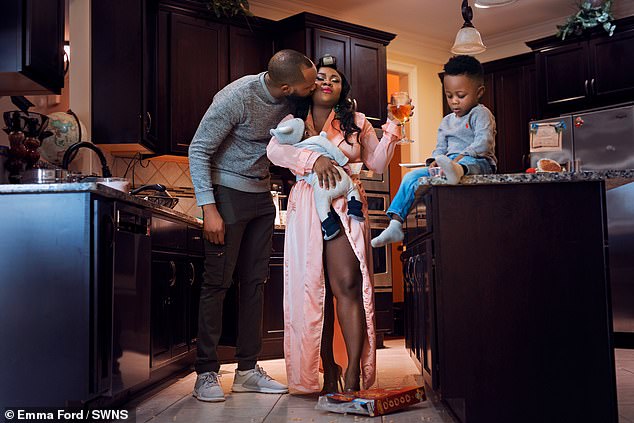 The family pose together in their kitchen for an Instagram photograph. Their eldest Samuel balances on the counter top while Emma holds Solomon

And when it was time for her cesarean she tried to relax and enjoy the experience of becoming a mother to her second child.

Before heading into hospital she did her makeup perfectly; with a red lip, gold eye shadow, fake lashes and immaculate contouring.

The look was not complete without a perfectly curated outfit, finished off with some stiletto high heels and a matching handbag.

A week after strutting into hospital in her heels, she posted the incredible moment she met her baby for the first time on Instagram, to the delight of her 34,700 followers. 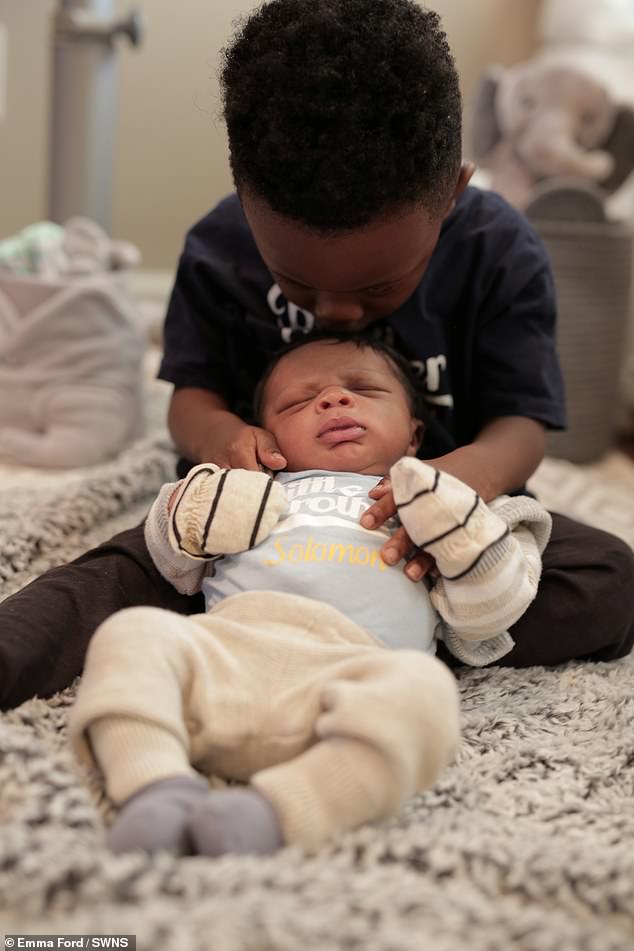 ‘When I woke up on the morning of my Caesarean, I was so excited and ready to meet my little room-mate of nine months,’ she said.

‘I wanted to look and feel my best, so I decided to do my hair and makeup. I really believe that when you feel good, you can’t help but radiate positivity and life.

‘The thought of the surgery was terrifying me, but I didn’t want to look like it, so I chose a little black dress and a bright red lip, and completed the look with heels.’

She filmed the arrival of family members at the hospital, and her three-year-old son Samuel can be seen looking thrilled to join his parents.

‘It was one of the best days of my life,’ she said.

Emma, who used to work in car insurance sales, juggles raising her two sons while continuing to dress up and doing her daily full glam makeup look.