According to an Apple tipster, the new iPhone will be able to display a small amount of ‘quickly glanceable’ information before its screen has been unlocked.

Such a feature would be similar to Android phones that always show basic information – like time and battery level – on a dark screen while conserving power.

iOS 16 will power the new iPhone 14, which is expected to be revealed by the tech giant this autumn. 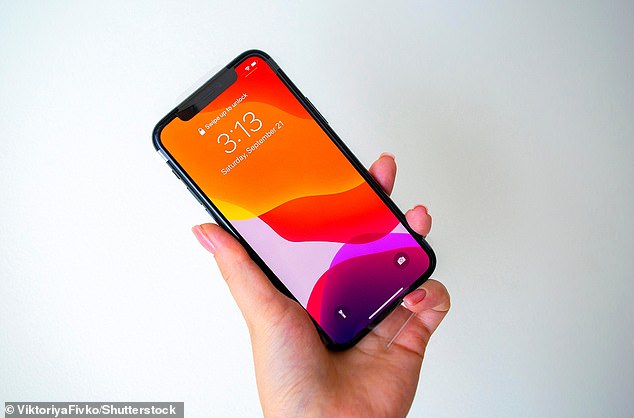 – Cut-outs instead of a notch

The news comes from Apple tipster Mark Gurman at Bloomberg, writing in the latest instalment of his ‘Power On’ newsletter.

Gurman did predict last year, however, that the iPhone 13 would have an always-on display – but this turned out to be incorrect.

‘This would allow the iPhone to turn down the frame rate significantly on the lock screen and display quickly glanceable information – similar to newer Apple Watches.’

Like the Apple Watch, iPhone 14 Pro and Pro Max may use low temperature polycrystalline oxide (LTPO) panels, which are able to conserve energy with the display on.

According to Apple, always-on is turned on by default on Apple Watch Series 5 and later, except for Apple Watch SE.

‘In this mode, the time will always be visible, along with the watch face or your most recent active app,’ the firm says.

Since it was introduced in the iPhone X back in 2017, the ‘notch’ has been one of the most-hated features in Apple’s smartphones.

The unsightly black bar houses the front-facing cameras, but eats away into the display, and is particularly obstructive while watching films or playing games.

Now, a new leak suggests that Apple could finally be ditching the notch in favour of two cut-outs at the top of the screen.

Read more: Apple could FINALLY ditch the notch in the iPhone 14

iOS 16, which is codenamed ‘Sydney’ by the tech giant, is described as a ‘fairly significant upgrade’ by Gurman.

‘It will be chock full of changes across the operating system, including updates to notifications, iPad multitasking, and the Messages and Health apps,’ he says.

Much like the iPhone 13, the iPhone 14 is expected to be released in four different variations – a standard model, a Mini, Pro and the Pro Max.

The always-on feature will be included on the two most expensive iPhone 14 models – Phone 14 Pro and iPhone 14 Pro Max – but not the cheaper models, Gurman claims.

iOS 16 is expected to be unveiled at Apple’s upcoming Worldwide Developers Conference (WWDC), which runs from June 6-10.

Meanwhile, the iPhone 14 is expected to be unveiled on September 13, according to another report from Apple-focused site iDropNews.

While Apple is yet to confirm or deny the leak, the date would fit in well with previous iPhone launches, which usually happen on a Tuesday in mid-September.

According to yet another report, cameras on the most expensive iPhone 14 models will stick out like never before, in order to house a 48-megapixel Wide camera.

Meanwhile, rumours are also rife about the ‘iPhone 15’, even though it won’t be released until 2023.

iPhone 15 could come with a new charging cable

Back in 2012, Apple caused mass hysteria amongst iPhone owners as it switched the original 30-pin charging port to its current Lightning port.

Now, a reliable leaker claims that Apple may be preparing to change the charging point for a second time.

Analyst Ming-Chi Kuo claims that Apple will finally ditch the Lightning port for USB-C in its 2023 iPhone, rumoured to be called the iPhone 15.

The leak comes shortly after the EU unveiled plans to force all new smartphones – including iPhones – to use USB-C as standard.

Apple has previously pushed back against calls to switch to USB-C, amid claims it would produce an ‘unprecedented volume of electronic waste’ and stifle innovation.

‘Love Is Blind’s Amber & Matt Are Doing So Well, They Might Plan A Second Wedding

This is how reading books can impact your mental health

Trauma of getting justice when your abuser is a police officer