Crown jewels: Stunning sapphire and diamond jewelry that belonged to the ‘Queen of St. Petersburg’ before being smuggled out of her home and taken to London during Russian Revolution is sold at auction for $879,000

The very luxurious lot hit the auction block at Sotheby’s in Geneva today, and included a sapphire and diamond brooch and matching ear clips that had previously belonged to a woman nicknamed ‘The Queen of St. Petersburg.’

The gems were part of the extensive collection of Grand Duchess Maria Pavlovna, whose friend dismantled them and snuck them out of Russia hidden in old pieces of newspaper in 1917. 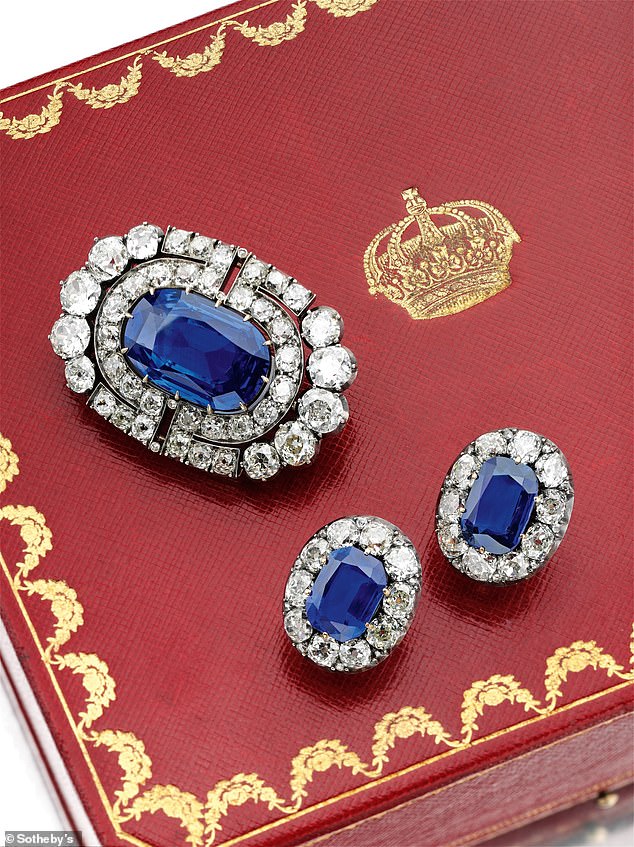 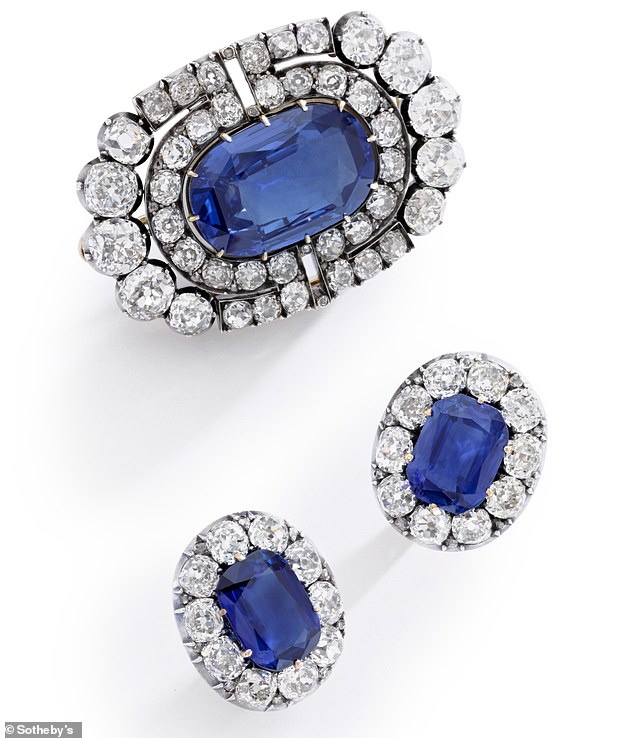 Glitz and glam: The very luxurious lot hit the auction block at Sotheby’s in Geneva today, and included a sapphire and diamond brooch and matching ear clips 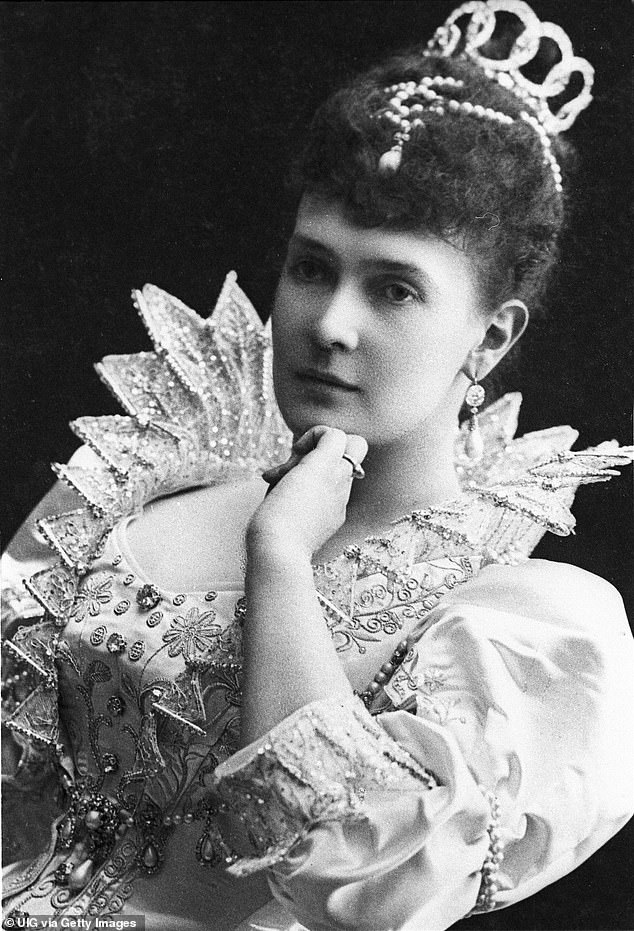 Her gems: They had previously belonged to Grand Duchess Maria Pavlovna, nicknamed ‘The Queen of St Petersburg’

The Grand Duchess Maria Pavlovna was born Duchess Marie of Mecklenburg-Schwerin, and went on to marry the second son of the Russian Emperor Alexander II, Grand Duke Vladimir Alexandrovich, in 1874.

She was the aunt of Emperor Nicholas II, the last Emperor of Russia.

Maria Pavlovna was famous for her jewels, including the sapphire items that were sold today. And as the Russian Revolution ramped up, she made a plan to escape — and save her collection.

First, she traveled to her summer villa in the spa town of Kislovodsk in the Caucasus.

Then her friend Albert Henry Stopford, a British antiques dealer and aristocrat, disguised himself in workman’s clothes and turned up to Vladimir Palace, where he was let in by Maria’s son Boris and a servant.

Stopford collected Maria’s prized jewels — 244 pieces in all — and dismantled them, wrapping them up in pieces of old newspaper and securing them away in a pair of Gladstone bags.

He then made a three-night train trip to meet Maria in Caucasus.

In his diary, he wrote: ‘KISLOVODSK. The grand Duchess received me in her cabinet de travail and we counted the money which I had bought her in my boots form Petrograd. It was in revolutionary thousand rouble notes, which she had never seen before.

He soon left for Sweden, Scotland, and finally England, whisking the jewelry away to safety and depisiting them in a bank.

His timing was incredibly fortuitous, as after he left Maria, she sent him a letter detailing how ‘the Committee of Workmen and Soldiers came to the house at 2.30 am and stayed until 6, opening, searching and turning everything topsy-turvy.’

Maria wouldn’t head west for two more years, spending the rest of 1917 and part of 1918 in Caucasus before traveling to Anapa, near the Black Sea, in 1918. She spent 14 months there and finally left for Italy in February of 1919, making her the last Romanov to escape Russia.

She’d made it to Paris by July of that year, but never caught up with her jewels in London: She died on September 6. 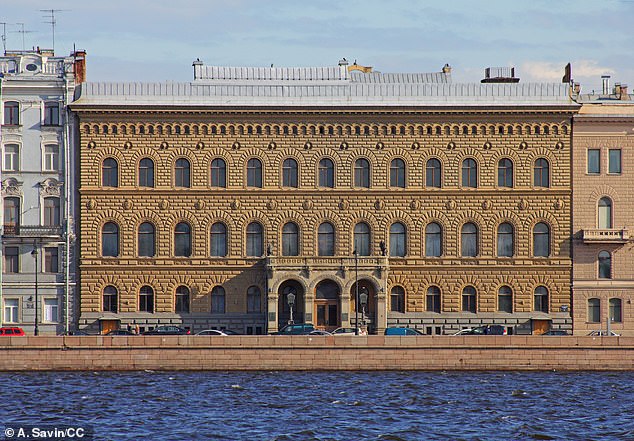 How it happend: He disguised himself in workman’s clothes and turned up to Vladimir Palace, where he was let in by Maria’s son Boris and a servant 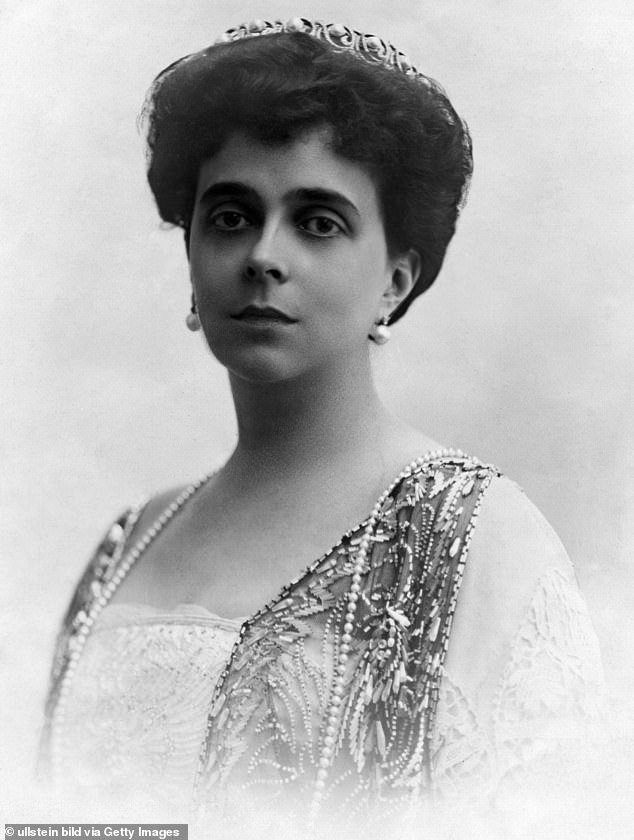 Bling: Maria wouldn’t head west for two more years, and died soon after arriving in Paris. She was never reunited with the jewelry, which was passed down to her daughter

Maria’s jewelry was passed on to her daughter, Princess Elena of Greece and Denmark, and then continued to be passed down to other family.

Some sold it to support themselves — which is how Queen Elizabeth eventually came to own a tiara from Maria’s collection, the Vladimir Tiara.

It was purchased by Queen Mary and, according to Tatler, repaired and upgraded with 15 emeralds. The frame was later updated again in 1988.

Meanwhile, the brooch and matching earrings have now been purcahsed for 806,500 CHF, marking their first sale since 2009.

‘We rarely come across jewelry with a more storied provenance than these stunning sapphire and diamond pieces,’ said Olivier Wagner, head of sale and jewelry expert at Sotheby’s Geneva. 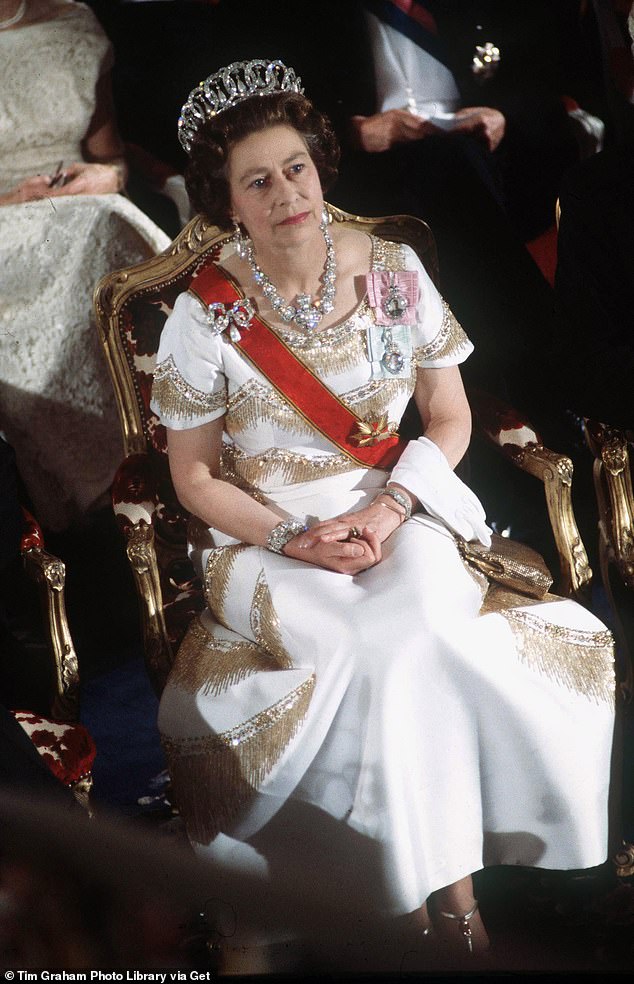 Hers now! Some of the jewelry was later sold, which is how Queen Elizabeth eventually came to own a tiara from Maria’s collection, the Vladimir Tiara 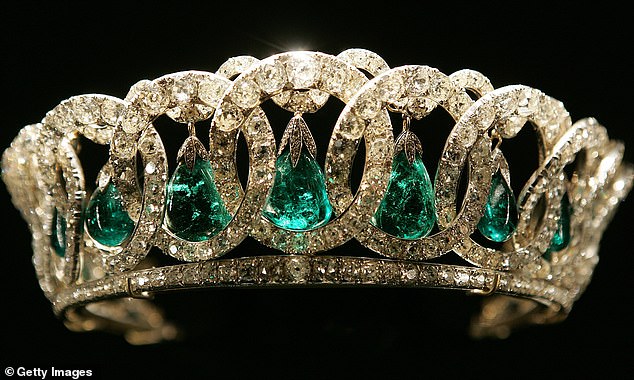 It was purchased by Queen Mary and repaired and upgraded with 15 emeralds. The frame was later updated again in 1988

‘Theirs is a truly remarkable survival, having made their way from one of the Romanov palaces, out of revolutionary Russia, across war-torn Europe and into the vaults of a London bank.

‘Often referred to as “The Queen of St. Petersburg,” the grand duchess was by all accounts a glittering figure who fought to hold on to the trimmings of splendor during the revolution.

‘Here we get a glimpse into her long-forgotten jewelry box, bravely spirited out of Russia by one of her closest friends.’

They come in a case, made later by Cartier, that’s been stamped with the crown of the Royal House of Greece, King of the Hellenes.

Miley Cyrus Says Sobriety Is 'Important for Me During This Time': I'm 'Clear to Tell My Own Story'