When Jill Hennessy made her first speech in the Victorian Legislative Assembly in February 2010, she nominated those who had "inspired" her and on whose "shoulders" she stood.

They included her local federal Labor members, Deputy Prime Minister, and then very soon to be prime minister Julia Gillard, and another senior minister in the Rudd (and Gillard) Labor government, Nicola Roxon. 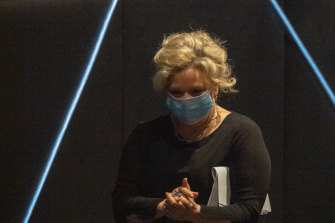 Too hard on the family: Attorney-General Jill Hennessy has resigned.Credit:Eddie Jim

Hennessy also warmly referred to Victoria’s first woman premier, Joan Kirner, who was watching on in the public gallery, describing Kirner as a "remarkable woman whose commitment to improving the lives and representation of women is one I hope I can emulate".

Since she arrived in the Victorian Parliament a decade ago, Hennessy has established a record that would not embarrass her in the company of the women she mentioned in that 2010 speech.

Deftly neutralising what is typically a troublesome portfolio for any state government, Hennessy proved her reformist stripes by introducing the legislation and leading the public debate over the contentious Voluntary Assisted Dying law in 2017.

She also collaborated with the Sex Party’s Fiona Patten in the passage of legislation to establish protection zones around abortion clinics. Since becoming Attorney General in 2018, Hennessy has continued to be the face of the Andrews government’s social adventurism, among other things, initiating bills to decriminalise public drunkenness (a reform advocated by Indigenous communities) and ban LGBTIQ+ conversion practices.

Hennessy’s decision to step back from the Andrews ministry is a blow to the Labor government. The fifth minister to be sacked, pushed or resign this year, she is the most significant loss.

With state parliamentary parties notoriously only batting so low, finding an adequate replacement for her will not be easy.

Moreover, while Hennessy has emphasised that she departs with the blessing of "my friend" the premier, and has left open the option of a future return to the front bench, her resignation adds to the impression of a government put through the ringer this year.

That Hennessy has gone citing the collision between work and family once again spotlights the exacting nature of political life – and sadly, women politicians are the ones who frequently find its balancing act hardest to sustain. This is a hurdle yet to be overcome for improving the lives and representation of women.

Paul Strangio is an associate professor of politics at Monash University