In one of the night’s few surprises, Foster received the best supporting actress award for “The Mauritanian,” in which she plays real-life criminal defense lawyer Nancy Hollander. Appearing with wife Alexandra Hedison via video chat, the actor thanked the film’s director, Kevin Macdonald, and her co-stars before name-dropping Rodgers.

After accepting her award, Foster revealed she’d already heard back from Rodgers, who opted for a creative way to congratulate her.

She told reporters in the Golden Globes’ virtual press room Sunday that she’s a huge Packers fan. “In fact I just got a very cute video from Aaron Rodgers, where he says he’s going to get me back. So I’m looking forward to this. We’ll see who wins,” she added.

As it turns out, Sunday was merely the latest chapter in what has become a platonic love fest of sorts between Foster and Rodgers. In early February, Rodgers included Foster in his acceptance speech after receiving the 2020 NFL Most Valuable Player award. 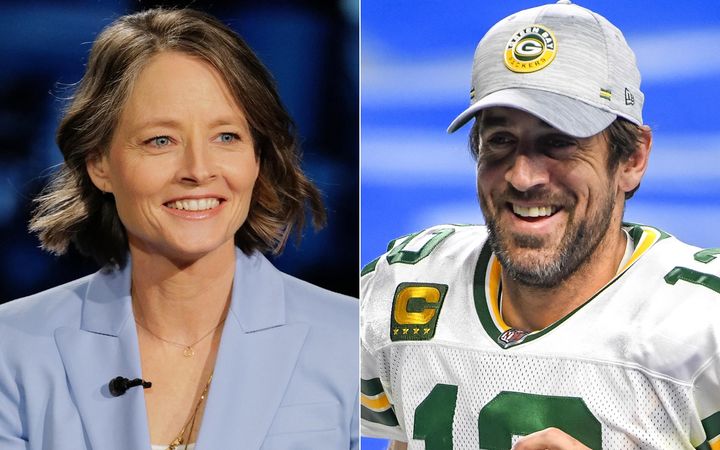 Given that there was no obvious connection between the NFL player and the “Silence of the Lambs” actor, the moment drew quizzical responses from fans and media alike. Many speculated that Foster may have somehow introduced Rodgers to her “Mauritanian” co-star, Shailene Woodley.

Last week, Woodley confirmed she and Rodgers had gotten engaged after a seemingly whirlwind romance. Describing her fiancé as “a wonderful, incredible human being,” the actor quipped to Jimmy Fallon, “Everybody right now is freaking out over it and we’re like, ‘Yeah, we’ve been engaged for a while.’”

And just days earlier, Foster confirmed she’d never met Rodgers in person and brushed off the implication that she was somehow instrumental in his relationship with Woodley.

“He just knows I’m his biggest fan,” she told Jimmy Kimmel on Feb. 18.

Foster reiterated that point in the Golden Globes press room Sunday, joking that Woodley may have picked up some of her enthusiasm for the Green Bay Packers while on the “Mauritanian” set.

“I do like to talk about how much I love the Green Bay Packers and sometimes I can talk a little bit too much about that,” she said. “Shailene is very aware of my enthusiasm for the team. I decided that not only am I a huge Packers fan, but I am MVP. I am competitive MVP with Aaron Rodgers.”

When Will Lorde Release Her Third Album?