Home » Lifestyle » Josh Frydenberg is rolling in the red, and mighty proud of it

For a man with a crushing financial headache, Josh Frydenberg was determined to turn suffering into the image of achievement.

Why, if you listened closely to his budget speech, you would have heard his marvellously well-timed pledge that the cost of treatment for chronic migraines was, thanks to the sympathetic government he served, about to plunge from $6800 a year to not much more than $40 a script – or just $6.60 for concession card holders. 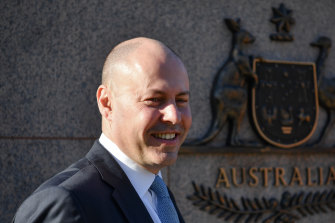 Still, could there be a successful treatment for the level of psychic pain afflicting a Treasurer required to deliver a budget burdened with the most immense debt and deficit in Australian history in dollar terms, and the greatest as a proportion of gross domestic product since World War II?

Even the famous budget tree in the parliamentary grounds had discarded all pretence at jollity. Normally a cheering riot of glorious red autumn leaves on budget day, it stood naked and shivering, stripped of its foliage by unkind Canberra headwinds.

The most significant riot of red to be found around Parliament on Tuesday was in the voluminous Budget Paper No. 1, in which could be found the gory truth of the effects of the coronavirus pandemic on the national economy, and the big-spending strategy underway to effect a recovery.

Frydenberg, having promised only two years ago that Australia was Back in Black – and happily had himself photographed waltzing around with a coffee mug bearing precisely that slogan merrily purloined from AC/DC – was required to concede that the nation was, in truth, Back in the Red.

Don’t expect newly red-printed mugs to fill the parliamentary gift shop’s shelves in the foreseeable future, however. A government whose foreseeable future is dominated by the certainty that it must face a general election within a year is unlikely to embrace a line like Back in the Red.

There was only one thing for it. Frydenberg had to spin current circumstances as a triumph. His first words to the nation set the brave tone.

“Australia is coming back,” he proclaimed. “In the face of a once-in-a-century pandemic, the Australian spirit has shone through.”

It was “Team Australia” at its best. A nation to be proud of. Thoroughly wound up, Frydenberg compared the fortunes of brave little Australia with nations whose falls from grace were more precipitous.

“Australia’s fate could have been so much worse,” he said, and you could almost smell the wolf who came to our door, only to find it bolted tight by Team Australia, persuading it to pad away in quest of easier prey.

“The United Kingdom, France and Italy all contracted by more than 8 per cent; Japan and Canada by around 5 per cent.

Employment had grown to above pre-pandemic levels, JobKeeper had kept 3.8 million people in their jobs, JobSeeker had helped 1.5 million without work, Cashflow Boost had supported 800,000 businesses and not-for-profits, and extra payments had gone to millions of pensioners, carers, veterans and others on income support.

Well, yes, there was a cost.

But Frydenberg, for whom the words debt and deficit were once abominations, remained resolutely upbeat.

“This is low by international standards,” he declared.

For a Treasurer so thoroughly Back in the Red, Josh Frydenberg made it all sound a matter of pride. Paul Keating, a big-spending treasurer who once declared a recession was just the medicine Australia needed, would very nearly display envy at such a level of chutzpah.

Our Morning Edition newsletter is a curated guide to the most important and interesting stories, analysis and insights. Get it delivered to your inbox.