Connect the dots! Kate Middleton channels 1980s Princess Diana in a vintage magenta polka dot dress by Oscar de la Renta during an evening at the Dublin Museum of Literature

Kate, 37, shone in the Oscar de la Renta number as she stepped out with Prince William, 37, for a reception which was hosted by Tánaiste Simon Coveney, in central Dublin on the second day of their historic tour of Southern Ireland.

The dress, fitted at the waist with a large belt and adorned with black polka dots, was reminiscent of an outfit by designer Donald Campbell Diana wore twice for engagements in the 1980s.

Diana first wore the Campbell dress, in pink and white, with a bright pink fascinator in 1983 as she arrived at the Perth Hockey Stadium in Bentley, Perth during her tour of Australia with Prince Charles when she was 22.

She recycled it two years later for a visit to St Peter’s Basilica in Vatican City in April 1985, this time shunning the hat. 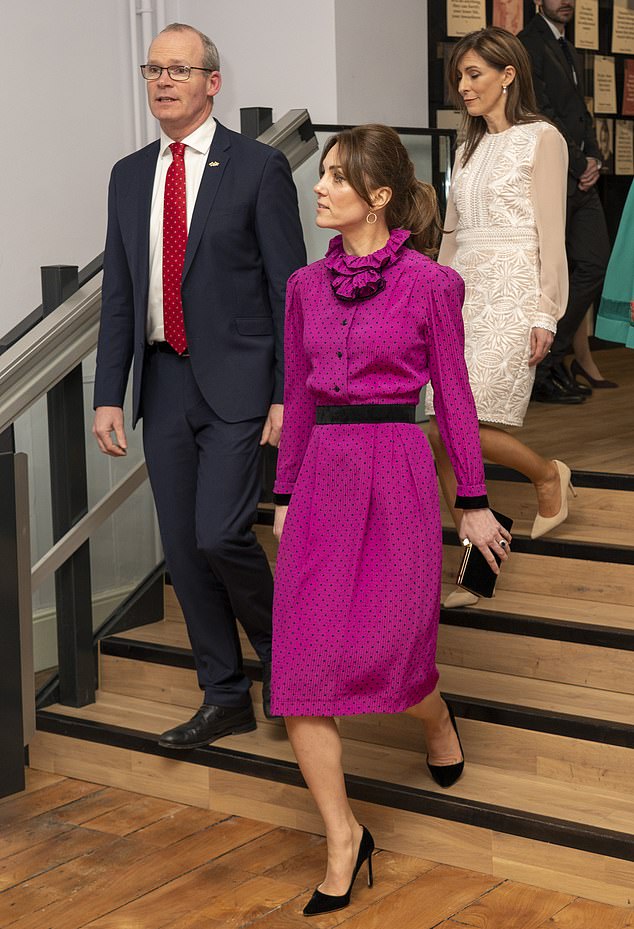 Kate Middleton, 37, (pictured) channelled the late Lady Diana with a vintage magenta dress by Oscar de la Renta in Dublin last night which bore similarities to a beloved dress Diana wore during hers and Prince Charles’ tour of Australia in 1983 and in Vatican City in 1985 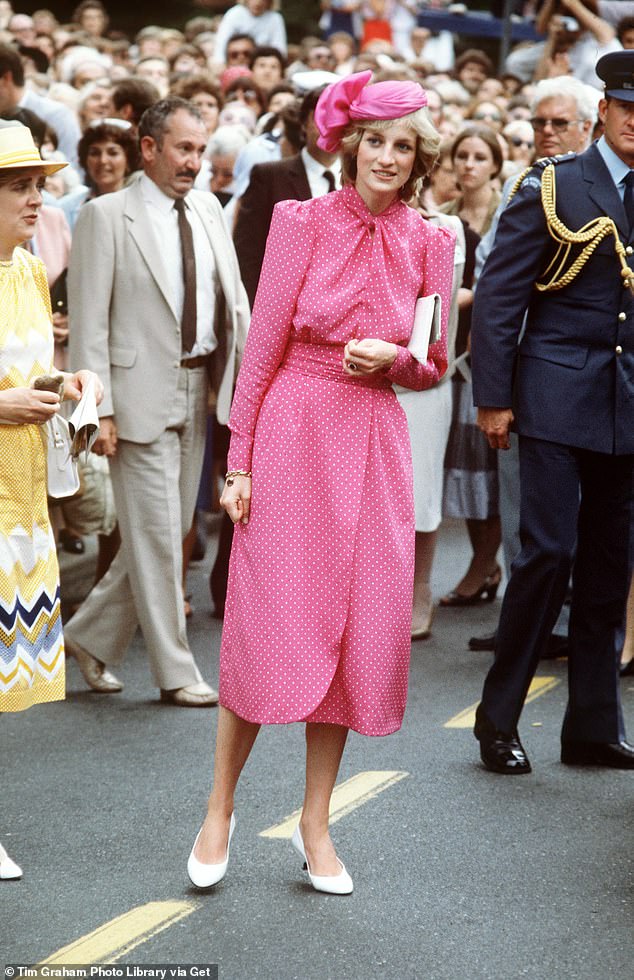 In 1982, still a newly-wed and young mother, Diana had paired the Donald Campbell number (pictured) with a pink fascinator and white accessories (pictured during her visit of Perth on April 7 1983) 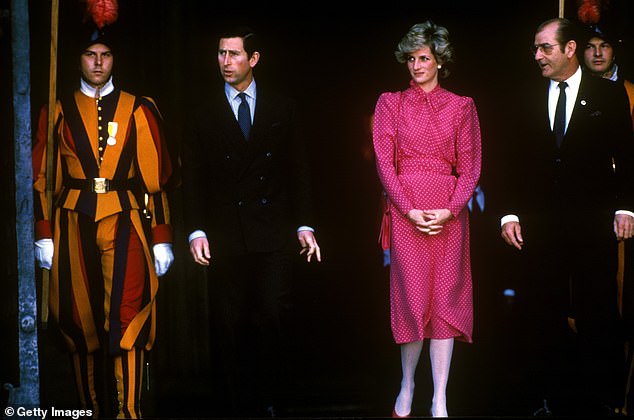 In 1985, Diana recycled the dress for a visit to St Peter’s Basilica in Vatican City, and this time paired it with a red cross body bag and red heels (pictured)

Kate’s dress shared similarities with Diana’s, but added a touch of modernity with the accessories she chose.

The royal paired the trendy pink dress, which featured a ruffled neckline, cinched waist and mid-length pencil skirt, with a black clutch bag and a pair of dangling gold earrings.

She sported glamorous makeup with a pink lipstick and a dark smokey eye, and swept her hair into an intricate up-do.

She teamed the statement gown with a pair of black heels, while the Duke of Cambridge sported a smart navy suit for the occasion. 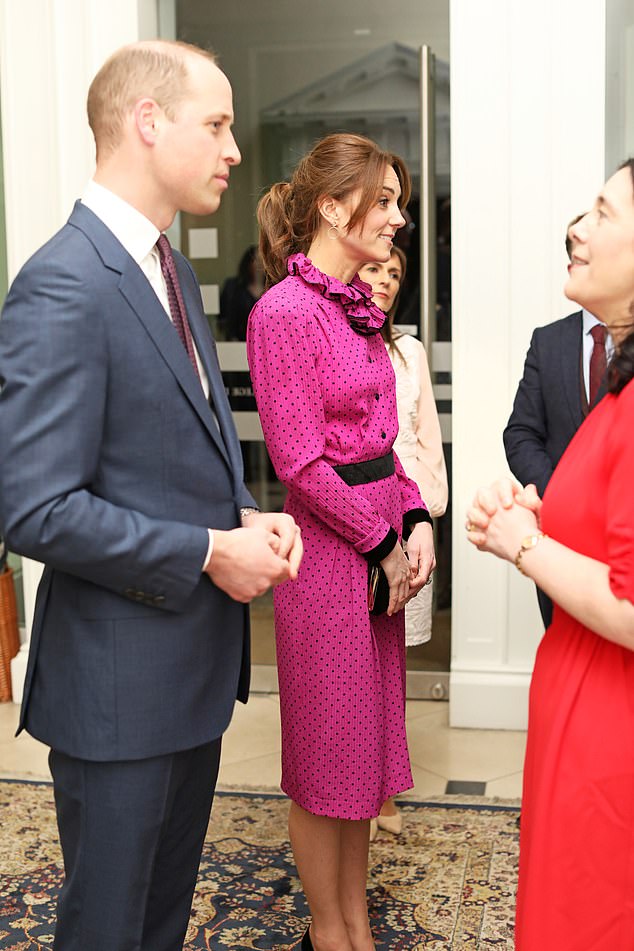 Kate sported the bold dress at a reception in central Dublin last night, and paired it with a black clutch and heels to match the dots pictured)

In 1983, two years after her marriage to Prince Charles, Diana had cultivated a demure look in the Campbell gown, putting the emphasis on its white polka dots by pairing the number with a white clutch bag and white heels.

Two years later, she updated the dress by pairing it with a red cross body bag and a pair of red heels as she grew more confident in making bold fashion choices.

Her Australia make-up was natural and subdued while she sported a stronger eye makeup in Italy. 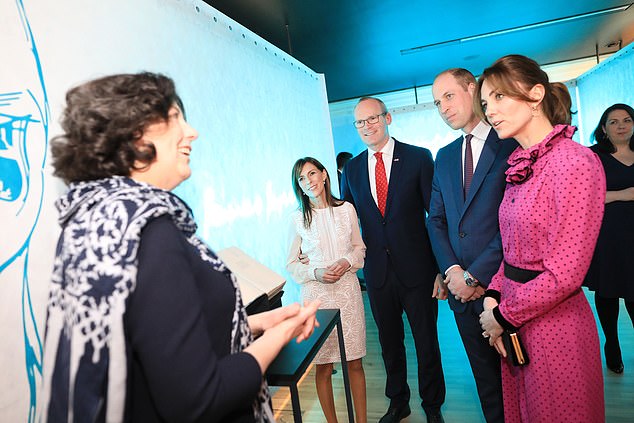 Kate and William listened intently as they listened to Colette O’Flaherty, Head of Collections National Library of Ireland, who showed them Joyce’s own copy of Ulysses at the Museum of Literature with Mr. Simon Coveney and his wife Ruth Coveney by their side (pictured)

Kate and William ended the second day of their tour of Ireland with the Dublin reception at the Literature Museum.

The Duke spoke about the Troubles and ‘many wrongs’ of Ireland and the UK’s ‘complex’ shared history at the reception.

He gave the keynote speech of the couple’s visit in which he refered to yesterday’s moving ceremony at the Garden of Remembrance, where he and Kate paid tribute to those who had lost their lives fighting for Irish independence from the UK. 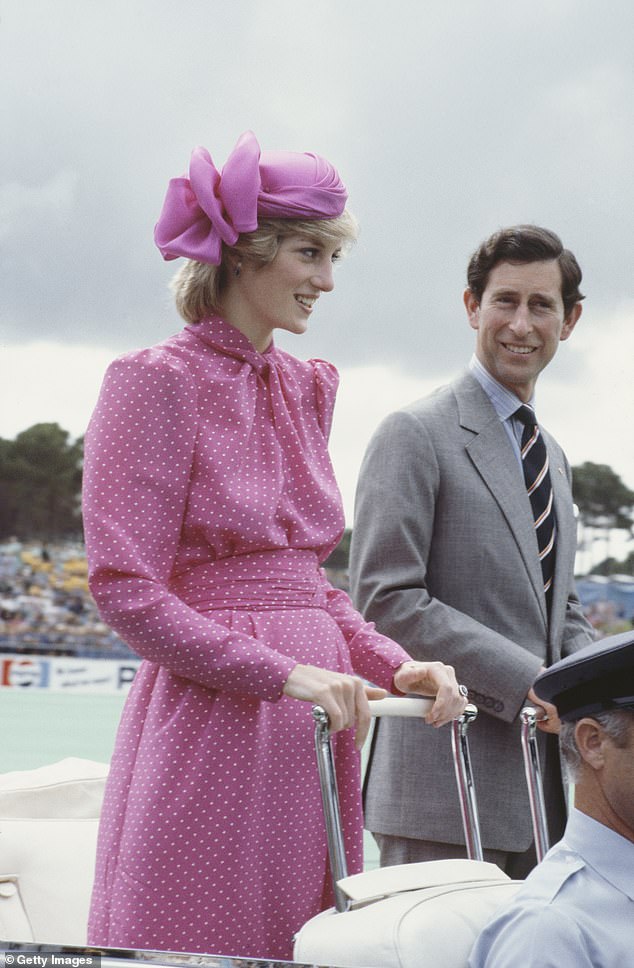 In 1983, Diana cultivated her newly-wed look with the Campbell dress, pairing it with a pink fascinator 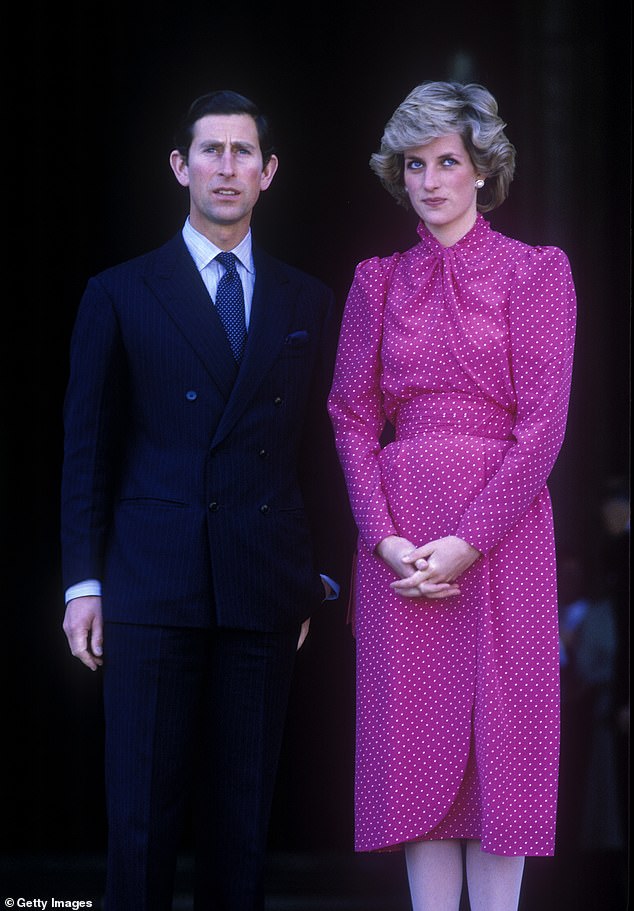 During her Vatican visit, Diana stripped back on accessories, only sporting a pair of pearl stud earrings (pictured)

Today marks the last day of Kate and William’s tour, and will start with a special event in Tribeton, Galway, where they will watch Macnas, Livefeed, Hoops and the Galway Community Circus, and will meet performers, young people and volunteers.

Later they will travel to the family-owned, traditional Irish pub Tig Coili in the city centre.

This afternoon, they will visit a local club of the Gaelic Athletic Association (GAA), to learn more about traditional sports such as hurling and Gaelic football.

During their visit, Kate and William will join children and young people from the club’s teams for friendly matches.

JAY-Z Announces Return of Made in America Festival 2021

Calling Dibs! Stars Reveal What They Took From Movie and TV Sets