I know the NRL and the stadium folk, not to mention the other professional sports, don’t like the idea of taking money ear-marked for #StadiumSplurge and putting it towards sustaining professional football, and why would they? 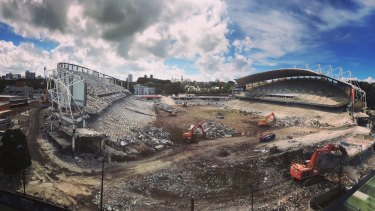 Allianz Stadium has been demolished, but surely the funds for a rebuild are now of far more value elsewhere?Credit:Andrew Webster

When you have been right at the front of the queue for absurd public largesse for so long, it is probably inevitable that you take it as your due that you can have your cake, eat it too, and send the bills to the taxpayers.

But without being unpleasant about this, CAN YOU GET A FREAKING GRIP?

First up, the situation. We are moving into a cataclysmic event that, globally, will likely be for us what World War I, the Great Depression and World War Two was for previous generations. By any measure, it is something that will make September 11 look like a minor pimple on your bottom. The fall-out will very likely be millions of dead, a change in the world order, an economic downturn that in some parts will likely be just like the Depression as masses are thrown into unemployment and … a big hit to the revenues of the football codes in Australia.

It is tough for those football codes, but in terms of global and even national importance it is as nothing in the struggle to keep as many people alive as possible, and an economy that works for as many as possible after this is all over.

But then comes the possible mooted solution for the Australian football codes. 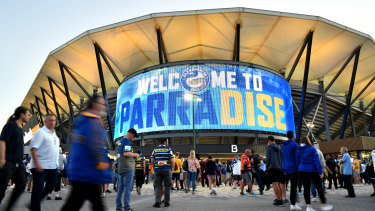 While Bankwest Stadium looks great, times have changed and the upgrades to Allianz Stadium and ANZ Stadium should too.Credit:AAP

In recent times as we know, a staggering amount of money was put towards knocking down three perfectly good stadiums and replacing them with new ones. (I think I might have mentioned that, yes?) One of those stadiums, at Parramatta is completed, and looks fine. The Olympic Stadium at Homebush meanwhile has $800 million earmarked to turn it, as Andrew Webster put it "from an oval into a rectangle". And the old Sydney Football Stadium is now nowt but an empty space, with construction due to begin soon. The most recent blue on that stadium – and I AM NOT MAKING THIS UP – was who should pay for the "electronic curtain" needed, to hide things when the stadium was barely full, so that the SCG Trust, the sports, and the NSW Government wouldn’t look completely absurd for knocking down the old stadium in the first place, and replacing it with a state-of-the-art near empty one. All while, in the meantime, new management at the NRL has made noises that it realises that its true future is in chokka suburban grounds anyway, and not empty mega-stadiums.

Still with me, tree people? God bless you, I am singing for you too.

Hence the bleeding obvious idea: call off the jam. Take the absurd expenditure earmarked for the SFS and turning the Olympic Stadium into a rectangle, and put some of that money towards helping the football codes survive.

And here we must take pause while the NRL, the SCG Trust and various football ferals jump up and down and say: but we want the taxpayers to pay for stadiums they never needed in the first place, and be near the front of the queue as the government gives out hand-outs. Go for your lives.

Ok, I have the answer. No. Get nicked.

The idea that the professional sports industry, which does not pay taxes, should continue to have their bills paid by the public through taxpayer funds, while the public itself suffers economically as never before, and the taxpayer revenue shrinks as never before is – over.

Sure, this was manifestly possible in a prosperous and healthy world before this pandemic hit, and you really did manage to fool most of the people, most of the time, to get it done. But that time is completely gone.

So if the government does propose such a solution to the professional football codes – you will get some money, but you’ll only have one cracker-jack new stadium, you should grab it with both hands and fall to your knees in gratitude.

Of course I don’t want to see the end of professional league, union, and AFL. Beyond the entertainment they provide to the people, they are an industry that generate an enormous amount of employment – but it is also demonstrable fact they were able to do that with the old stadiums. It would be great to have all the football codes back once this is all over. So how obvious is this for a compromise?

Grab it, you stupid bastards!

What to do with the SFS site at Moore Park? How 'bout giving Sydney what it is in most urgent need of: a leafy green space for people to walk around in?

And yes, I appreciate that while this is NSW money, not federal money, that, too, can be worked out. Work out what money it will take to sustain all of the professional football codes, and keep them alive so they can begin next season intact. Let NSW work out their portion of that figure, and come to an agreement with the other states to fund it, taking that debt off the fed’s hands – as the bills they will have to pay in coming months will be catastrophic enough, without stuffing around with sport.

Gladys, by and large, has shown genuine leadership in this pandemic to date.

This is an obvious one, Premier. Do it.