In its Special Review of Australia’s Climate Goals, the Climate Change Authority said use of the projected surplus from the current Kyoto Protocol period would effectively slash Australia's promised 2030 emissions cut of 26-28 per cent on 2005 levels to just 14 per cent. 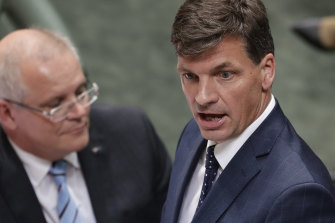 Angus Taylor has argued Australia will ‘meet and beat’ Paris carbon goals, but much of the reduction may come from the use of so-called Kyoto carryover credits.Credit:Alex Ellinghausen

While "there is a short-term benefit" for Australia, relying on credits "will essentially defer Australia's transition and require accelerated emissions abatement in future years", the Authority said.

Richie Merzian, a former Australian climate negotiator, said that "on the use of dodgy Kyoto credits, the message to the Australian government is clear – don't use them and actually reduce your emissions instead".

The report also noted among developed countries, "Australia is one of the most vulnerable to the impacts of climate change".

However, in order to protect the economy and "the natural systems that support us … Australia needs to participate in strong global action to reduce emissions," the Authority said.

It also advocated a trade and investment strategy that identified and made use of "our new competitive advantages in a global net-zero emissions world".

Energy and Emissions Reduction Minister Angus Taylor has been approached for comment.

Taylor Swift Takes Us Through How She Became "the Man" For Her Video, and It's So Trippy