The head of the national security anti-corruption watchdog has defended her strategy for investigating suspected corruption in the Australian Border Force and said the ongoing matter has serious criminal proceedings in its sights.

The Australian Commission for Law Enforcement Integrity is investigating $39 million in payments made by the ABF, against internal advice, to listed boat builder Austal in connection with the $573 million Cape Class patrol boat contract. But the probe has caused divisions within the anti-corruption agency, with lawyers helping the investigation leaving over a conflict about the best way to question witnesses. 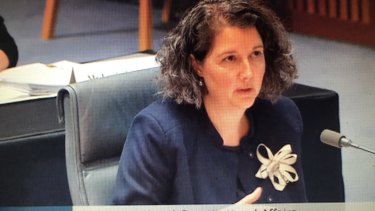 Integrity Commissioner Jaala Hinchcliffe provided fresh details on the timeline and defended her strategy to a Senate estimates hearing on Friday.

She was briefed on Operation Tardis, the ABF investigation by the two barristers as counsel assisting, corruption specialist Jonathan Hyde and Dianna Tang, when she started the job in February.

In 2019, there were 20 people brought in for private hearings, which use the commission's coercive questioning powers, but the evidence collected in the hearings is not admissable in a criminal prosecution. The lawyers indicated at least 10 more people would need to be questioned.

Ms Hinchcliffe says she suggested four of those be issued with requests for information instead, as they were not implicated in the corruption and there was no information to suggest they would not comply or would lie.

In mid-March, the two lawyers sent her "unsolicited" advice regarding the witnesses. Ms Hinchcliffe did not detail what this entailed but said she disagreed with it and told counsel assisting that "asking questions of witnesses is an investigative method that law enforcement officers use every day" and ACLEI had skilled investigators who could help conduct the interviews.

The commissioner said three of the four people had since been interviewed with investigators intending to speak with the final person in coming weeks. They have given ACLEI the information requested and, in some cases, had no knowledge of the events being investigated.

"While this has been portrayed in the media as a difference between advocating a tough investigating strategy or a weak investigation strategy, it is not the case that dealing with all potential witnesses through private hearings is a strong strategy," Ms Hinchcliffe said.

Coming from a background as a lawyer, she had a "particular predilection towards prosecution" and noted there was a balance to be struck because information revealed during hearings using the commission's coercive powers could not be submitted as evidence in criminal proceedings.

She also revealed she has asked police to examine leaks to this masthead over the matter with a view to a possible criminal investigation.

Gerard Houllier dead at 73: Tributes pour in for Liverpool, PSG and France legend after shock death

Lockdown helped me rediscover the joy of dating