Australia’s heavy industry is moving ahead of the Morrison government on emission reduction deadlines to set its own targets as major trading partners announce ambitious climate goals for 2030.

Prime Minister Scott Morrison is considering new emissions targets for Australia but says they will have to wait until the United Nations climate talks in Glasgow in November. At a major international climate summit on Friday, Mr Morrison promised to go ahead with a “technology not taxes” approach as other countries announced major new emissions deadlines. 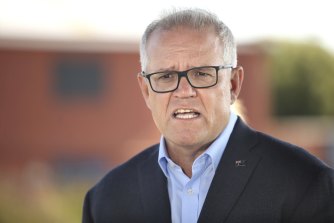 Prime Minister Scott Morrison says Australia may be able to beat a target of net zero by 2050, depending on technology development. Credit:James Alcock.

“We want to do it (reach net zero) as soon as possible,” Mr Morrison told reporters on Friday. “Preferably I’d like to do that by 2050. Potentially, it could be done earlier.”

US President Joe Biden’s climate summit on Thursday night heard from 40 world leaders, many of whom announced significant commitments to set bolder new emissions reduction targets. But Australia did not commit to a new target, even though Mr Morrison said he would like to get to net zero emissions by 2050.

The Business Council, peak employer representative Ai Group, and the agriculture sector have called for Australia to set a net zero deadline for 2050. Australia’s big miners and energy companies have set their own deadlines for 2050 or even earlier, and are already investing in clean technology and the nascent hydrogen fuel industry.

Mr Morrison used his summit speech to argue Australia would only set a more ambitious target if it could guarantee the economic outcome. He named a collection of major Australian companies who were “pioneering” solutions to climate change, including iron miner Fortescue, BHP, Rio Tinto, AGL, and Visy.

“In Australia, the corporate sector is getting on with the task of the energy transition with its zero emissions targets, investment in technology, and the introduction of renewable energy,” she said on Friday.

“We are leading by example through our ambitious, industry-leading target to achieve carbon neutrality by 2030.”

BHP, Rio Tinto, and AGL, and other major Australian industrial heavyweights, have also set net zero 2050 emissions targets – or better – for themselves. The finance sector has also targeted climate risk as a significant factor in funding decisions.

At the climate summit, Chinese President Xi Jinping said China’s coal consumption would peak no later than 2025 and then start declining. China has previously pledged to reach net zero emissions by 2060.

Any reduction in China’s significant coal consumption would make it tough for Australia’s coal export industry.

Mr Morrison said the federal government is reviewing emissions deadlines. So far Australia only has a modest target for 2030, and no other longer-term targets.

“We’re going through that process and when we have more to say about that, we will,” Mr Morrison said. “When we’re in a position to do that, that’s (Glasgow) where we will make them (deadlines).”

Australia’s major trading partners used the climate summit to set ambitious 2030 goals and have already committed to net zero 2050 deadlines. The federal government is committed to reducing emissions by 26 to 28 per cent by 2030 and has not set a deadline to reach net zero.

The government announced this week more than $1 billion in support for the emerging hydrogen industry, research partnerships with other countries for new technology, marine environment health, and to develop controversial carbon capture and storage technology.

“For Australia, it is not a question of if or even by when for net zero, but importantly how,” Mr Morrison said.

Australia’s focus on technology and refusal to commit to deadlines is at odds with other developed nations’ increasingly ambitious climate policy. The US committed to nearly double its emissions reduction target of 26 to 28 per cent on 1990 levels by 2025 by raising it to 50 per cent by 2030.

“Achieving net zero emissions won’t happen by itself. The act of setting an ambitious target unleashes the action required to achieve it,” she said.

Without deadlines, businesses will seek economic gains by being the last, rather than the first, to adopt new technology, Ms Skarbek said, arguing “push and pull” policy mechanisms were needed to get producers and users switching to cleaner alternatives.

“There’s a first mover’s chicken and egg dance and there’s a disincentive to move first,” Ms Skarbek said. “It costs more to use new technology the first time, and a lot less when it’s been done a lot.”

“Unless all the players in an industry are required to commit to those first mover costs then they will hesitate in a competitive market.”

The Morrison government has previously embraced tight deadlines for another polluting industry, announcing last a year a 2024 ban on exports of dangerous waste materials.

“You can set a net zero target or you can price the pollution so maker or user doesn’t want to incur the cost,” she said. “Both achieve the same end – to tilt the balance so the user and maker both want to choose the zero emissions option.”

Chris Packham calls on homeowners to stop moving their lawn