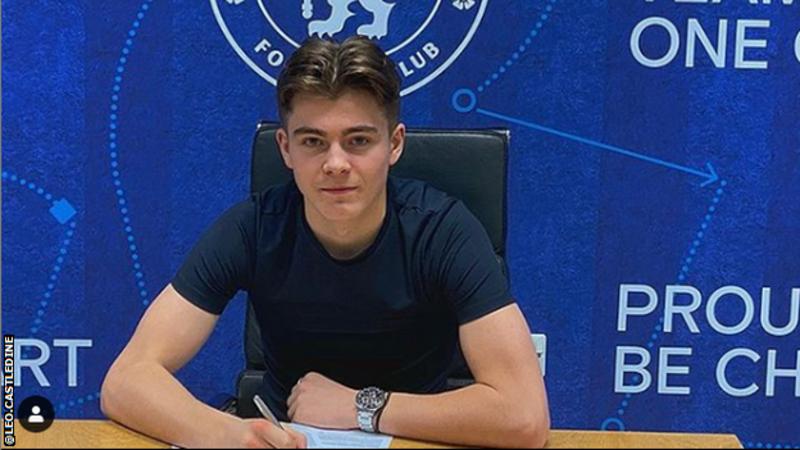 Leo Castledine is one of the hottest young prospects in British football.

Last month, we checked out some of his skills in our new series Wonderkids, which looks at some of the best young ballers coming through academy systems.

The 14-year-old midfielder is an England Under-15 international and became the youngest AFC Wimbledon player to feature for their under-18 side last summer.

On Wednesday, he completed a transfer from Wimbledon to Chelsea, after eight years at his former club.

Some of you may remember Leo’s old man Stewart Castledine, who played for Wimbledon FC from 1991 until 2000, and his mum is former Homes Under The Hammer host Lucy Alexander.

Before signing for Chelsea, Leo told BBC Sport a bit about some of his biggest achievements with Wimbledon, his ambitions and which players he compares himself to.

He describes himself as “an all-action goal-scoring midfielder who drives well with the ball”.

He’s also versatile. The lad started in a more defensive role with Wimbledon, before moving into midfield.

“Moving from defence to midfield was a very gradual process for me,” Leo told us, adding, “It took about two seasons. I was a tough-tackling centre-back at the start of my U13 season and now, towards the end of U15 season, I am a centre midfielder and sometimes play as a number 10.”

“I dribble and create chances just like Grealish,” he said. Castledine also says he is a very similar player to Mount.

He also told us a few interesting facts about himself outside of football.

Chelsea have that to look forward to then!

Some of the other Wonderkids we’ve featured include 13-year-old West Ham player Fletcher Hubbard and Arsenal U15 player Kieran Petrie.

Remember the names people and watch out for more Wonderkids from around the UK being featured by us soon.

Dr. Fauci said he had few side effects after taking the Moderna coronavirus vaccine and said it’s ‘as good or better than an influenza vaccine’