A LUFTHANSA pilot could be in for some hard looks from bosses, after drawing the shape of a penis in his flight path yesterday.

The plane created the rude-looking picture while waiting to land at Bremen Airport in Germany.

Flight LH350, which had been travelling from Frankfurt was forced to circle the airport on arrival.

The resulting line of travel mapped out a diagram of male genitalia, which was captured by FlightRadar24 – a website that tracks commercial flights.

It was shared on their Twitter pages, with the caption: "landed on second landing attempt," followed by a laughing emoji. 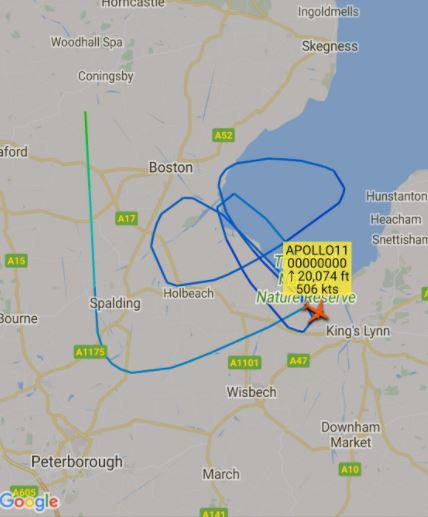 One Twitter user commented: "Landing a plane is HARDER than people think," while another joked, "come again?"

Several people questioned whether the pilot knew what they were doing when they created the pattern, or if it was sheer luck.

It isn't the first time a pilot has drawn a creative pattern with their flight path that has been captured by Flight Radar.

In 2017, an RAF fighter pilot left plane spotters shocked after tracing a 35-mile long penis in the skies above Lincolnshire.

That same year, an empty Airbus A380 plane flying out of Hamburg was feeling the Christmas spirit when the pilot mapped out a Christmas tree — complete with baubles — in the sky.

A year later, a pilot managed to fly in an exact outline of a Spitfire while flying a Silence Twister stunt plane around southern England.

In 2017, a US Navy pilot has landed himself in big trouble with his bosses after drawing a giant willy in the sky with the plane.

Prince Philip and Queen have 'rediscovered happiness' in 2020