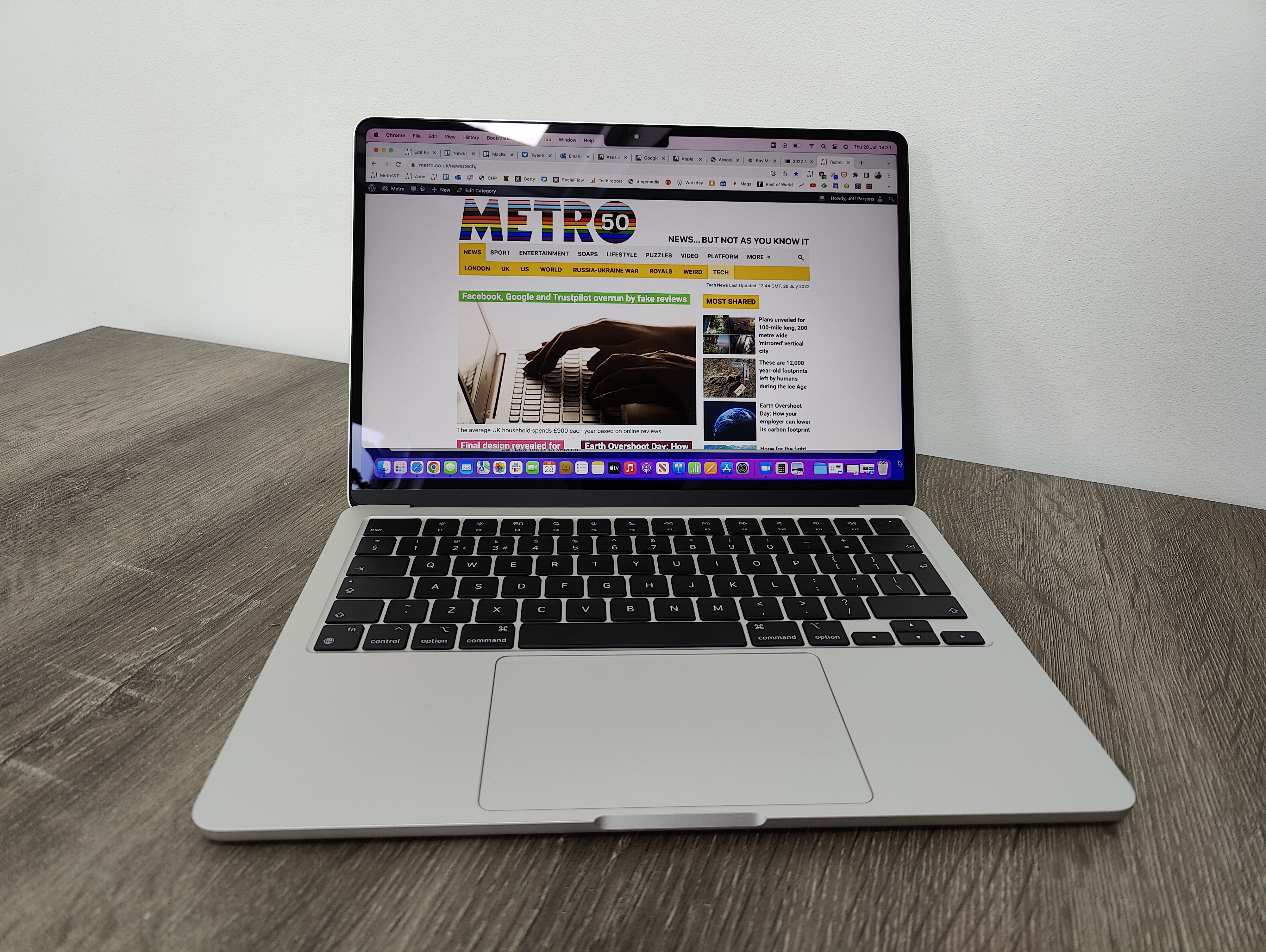 When Apple revealed the new-look MacBook Air at the WWDC event in June, it referred to the model as it’s most popular laptop.

It’s not hard to see why.

Ever since the MacBook Air was unveiled by Apple’s legendary co-founder Steve Jobs it’s been a hit. The whole ethos of the Air is to give users a thin and light laptop with great performance and an all-day battery life.

It’s not the processing powerhouse of the MacBook Pro but instead Apple’s everyman-laptop that will suit most workers just fine.

And the company has improved on the last model from 2020 in (almost) every way.

To start with, the design is different. Gone is the iconic wedge shape in favour of a more solid, slab-like approach. It’s better looking, more modern and actually thinner than the Air’s old design.

The 2020 Air’s chassis was 16mm thick and this new version slims that down to a scant 11mm. The weight is roughly the same.

Apple has kept the connections to a minimum – two Thunderbolt 4 USB-C ports and a 3.5mm headphone jack – but has brought back the MagSafe charging cable.

This means you can keep the Air powered up or charging without sacrificing one of the USB-C slots and also pull the wire away without the entire laptop crashing to the floor. In fact, speaking of the wire – it’s actually a very nice braided cable attached to a 30W USB-C power adapter.

It would have been nice to have seen this update include an SD card reader – but alas, Air owners aren’t able to give up dongles just yet.

Although Apple’s design has undergone a change, the quality remains. The stiff chassis doesn’t flex, the materials feel premium and the lid can be lifted with just one finger.

The one part of the new-look Air I do have a bit of a problem with can be found on the screen.

Apple has made the Air’s display a little bigger this time around, up from 13.3-inches to 13.6-inches. The bezels have been trimmed and the corners have been rounded. It’s also been made brighter for using outdoors and the colour accuracy, as far as I can tell, is excellent.

But it’s also got a notch. While I don’t much notice it on an iPhone, it’s hard to miss on the Air. Moreover, if you use the menu bar a lot and stick a load of extra stuff up there, the notch completely gets in the way. I appreciate it makes the screen bigger, because of the extra vertical real estate either side. But it’s still an eyesore.

At least the webcam has been upgraded. There’s now a 1080p camera nestled inside which is a definite step up from the 720p one on the last Air. And since I (like many) have at least one video call a day when working remotely, this is a big benefit.

Lastly, a note on the colour: Apple has expanded the colour options beyond just silver and space grey. You now also get a choice of Midnight (a cool blueish black) and Starlight (a shimmering silvery gold).

External changes aside, the big update to the Air is found internally in its processor. The Apple-built M2 chip provides, according to Apple, 18 per cent more multi-core performance and 35 per cent faster graphics.

The M2 chip has a number of tricks up its sleeve. It includes a media engine with a higher-bandwidth video decoder, supporting 8K H.264 and HEVC playback.

There’s also a ProRes media engine for hardware-accelerated encoding and decoding. Although dedicated video editors or creative professionals may opt for the MacBook Pro, there’s nothing to stop the Air being a perfectly servicable machine for Final Cut Pro for the enthusiastic amateur.

This new processor – capable of running iOS apps natively – also features a Neural Engine that can process 15.8 trillion operations per second. Which, Apple points out, is over 40 per cent more than M1.

The base model Air (the version Apple loaned me for this review) arrives with 8GB of RAM and 256GB of storage. I think, if possible, most people would benefit from stepping up to the next level and configuring it to 16GB of RAM with 512GB of storage. You’ll also get a slightly more powerful (35W) charging brick to boot.

But if you’re hoping to hold on to this machine for a good five or six years, use it most days and are often multitasking – you will probably find the extra upfront cost is worth it in the long run.

Lastly, the feature perhaps of most use to people (and one the MacBook Air line is famed for) is battery life.

Apple says that even with a larger display and increased performance, the 2022 MacBook Air still has all-day battery life: meaning up to 15 hours of wireless web browsing and up to 18 hours of video playback.

During my time with the Air, I managed to easily get a full, 8-hour day of multitasking work out of it with power left over.

That worked out to a lot of website multitasking in both Chrome and Safari, video conferencing over Zoom, music playback with Spotify and an occasional bit of photo editing as needed.

The Air isn’t meant as an out-and-out gaming machine but, thanks to Apple Arcade, I was able to spend a couple of hours after work relaxing with the likes of Fantasian or Oceanhorn 2.

As ever, the usual benefit of Apple’s ecosystem comes into play such that if you’re already an iPhone user or have a few sets of AirPods, you’ll benefit from the cross-functionality.

Suffice to say, the 2022 Air is a brilliant upgrade in every way. It’s the overhaul that the format needed and for the vast majority of people, should be a top contender when choosing their next laptop.

Where can I buy one? The MacBook Air is available directly from Apple or, alternatively, from Currys and John Lewis.