A man has been blasted after donating sperm to a female friend, who is now pregnant with twins, without ever telling his wife.

Revealing the situation in a Reddit post, on the ‘Am I The A******’ forum, the pregnant friend, 30, who is British, explained that she’s asexual and decided to have IVF to conceive.

But her male friend, 31, stepped in to be her donor, and everything had become fraught after she thanked the couple for ‘doing this for [her]’.

However, the wife was horrified, admitting that she didn’t even know her husband had donated his sperm, and was furious with both of them for not running it by her.

The mother-to-be explained that they’d gone through a licenced clinic for the donation, and that in accordance with the law, the father will not be obliged to pay maintenace for his unborn chldren in the future.

She said it ‘never occurred to her’ that he’d offer to be her donor without running it by his wife first. Te majority of commenters agreed that it wasn’t her fault, although some said she’d been ‘naive’ and branded the whole situation ‘weird’. 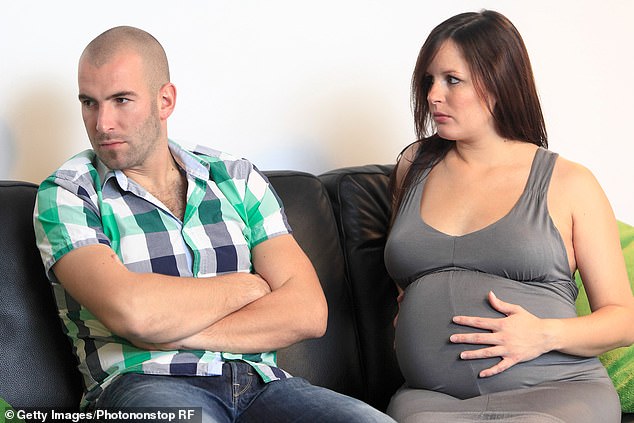 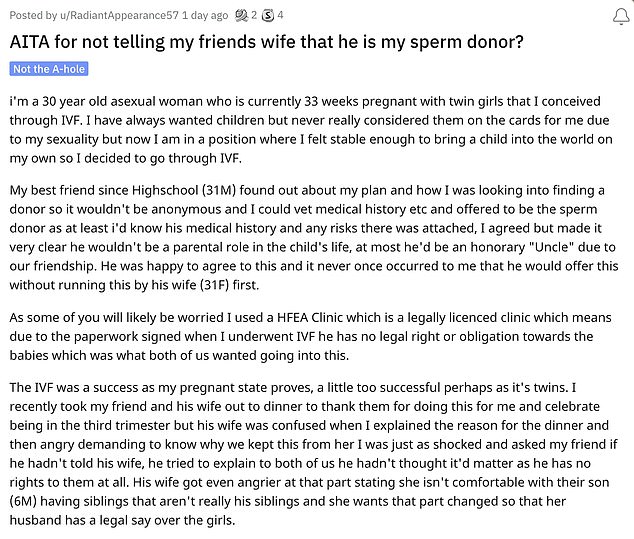 The lengthy post outlined the situation, revealing how a man had given the poster sperm, without, it transpired, ever telling his wife

‘I have always wanted children but never really considered them on the cards for me due to my sexuality, but now I am in a position where I felt stable enough to bring a child into the world on my own so I decided to go through IVF,’ she explained.

When her best friend, 31, who she’s known since high school found out about her plan, he offered to be her donor ‘so it wouldn’t be anonymous’ and she could ‘vet medical history’.

‘I agreed but made it very clear he wouldn’t be a parental role in the child’s life, at most he’d be an honorary “Uncle” due to our friendship. He was happy to agree to this and it never once occurred to me that he would offer this without running this by his wife first.’

She explained that she used a Human Fertilisation and Embryology Authority (HFEA) approved clinic, and part of the process was to sign paperwork that means he has ‘no legal right or obligation towards the babies’, adding that this was the arrangement they both wanted.

‘The IVF was a success as my pregnant state proves, a little too successful perhaps as it’s twins,’ she said. ‘I recently took my friend and his wife out to dinner to thank them for doing this for me and celebrate being in the third trimester. But his wife was confused when I explained the reason for the dinner and then angry demanding to know why we kept this from her.

WHAT ARE THE UK’S SPERM DONATION RULES?

Sperm donation is commonplace in the UK and used to help people start families when they can’t have children of their own naturally – if, for example, a male partner is infertile, if both parents are women, or if the mother is single.

Clinics in the UK are not allowed to pay men to donate sperm, except up to £35 to cover expenses such as travel. More may be offered if accommodation is necessary.

A law change in 2005 means men can no longer donate anonymously and must agree for any children born from their sperm to be able to find out who they are after they turn 18.

However, a donor father will never be required to parent the child or pay child support.

Sperm donors are usually aged between 18 and 41, although older donors may be allowed in some cases.

A donor will visit a fertility clinic once a week for between three and six months to make a complete donation – at each visit the donor will ejaculate into a cup and their sperm be frozen.

Donated sperm cannot be used to create any more than 10 families per donor, and the donor is allowed to withdraw his consent at any time until the sperm has been used.

‘I was just as shocked and asked my friend if he hadn’t told his wife. He tried to explain to both of us he hadn’t thought it’d matter as he has no rights to them at all.’

She added that his wife became even angrier over this, saying she’s not comfotable with their six-year-old son ‘having siblings that aren’t really his siblings’.

‘She wants that part changed so that her husband has a legal say over the girls,’ the woman added.

She concluded: ‘The three of us got into a huge argument and his wife demanded to know why I wouldn’t tell her that her husband had offered this in the first place…

‘I feel very guilty for not checking with his wife first but it honestly never occurred to me that he wouldn’t have done that first so I thought if he was offering she had to have already given the ok. Am I the a****** in this? I don’t know what to do…’

Most of the respondents said that the poster was not the a******, and firmly placed the blame at the husband’s feet

The majority of respondents blamed the husband, for not telling his wife that he was donating sperm to the friend.

One wrote: ‘The fact that he has a son with his wife makes it even more confusing to me why he wouldn’t have run this by her, or at least let her know he planned to do it. You did the right thing by thanking them as a unit, since married couples should be operating as a unit.’

Another agreed, writing: ‘It’s not like it’s a small thing. Sperm donation specially when you’re married and have a kid, is a big thing and he didn’t discuss it with his wife? Huge a****** here.’

And a further Redditor said: ‘It’s certainly weird. Your friend is very thoughtless to his wife, but it was his responsibility to tell her. On the other hand, I get the wife’s concerns about her son and the kids involved especially if you’re going to be around in any capacity, and you’re still friends with the guy I presume. Was the plan not to tell the son either? Yeah, it’s not on you but she has the right to feel how she feels.’

A minority of people on Reddit felt that the wife was the one who was being unreasonable, in the way she responded to the news

Some even felt the wife was acting in a way that was unreasonable, with one respondent writing: ‘The fact that she’s taking ownership over his offspring is so weird to me. “I won’t have my son have siblings that aren’t really his” ?!?!? While her anger is justified that part is a real doozy.’

Another felt even more strongly, saying: ‘ESH [everyone sucks here] including the wife. She is in a place of shock, but had no right demand legal rights of the kids.

‘And it was his sperm, from his body, and that was his choice to make. He didn’t sleep with the friend; the wife isn’t owed an opinion. It doesn’t really concern her. Bodily autonomy swings both ways.’

A further added: ‘I don’t want to judge your friends wife too harshly because I think she reacted from complete shock but demanding parental rights is completely wrong in this situation.’

However, the majority did seem to feel as though the poster has at least some responsibility for the situation, with one writing: ‘I felt utterly horrible for the wife. The husband was 100% out of line! And, I can’t imagine the confusion and betrayal she must have felt in that moment.

‘Even though this is mostly on the husband since that is his wife, I feel that OP [original poster] still should have at minimum had a conversation with the wife to ensure this was something she was comfortable with prior to the IVF procedure.’

Another agreed, writing: ‘It was his responsibility more than yours to tell her about it. Although, I do find it odd that you got this far in the process without mentioning it to her at all.’

And a third said: ‘Honestly, having a baby (as a donor or not) with a married friend who has a kid and not having serious deep conversations about it with them as a couple is just… Well.. Naive seems too kind, shall we say. I mean jeez, there are clearly issues that could arise here very easily. I just don’t get people sometimes.’