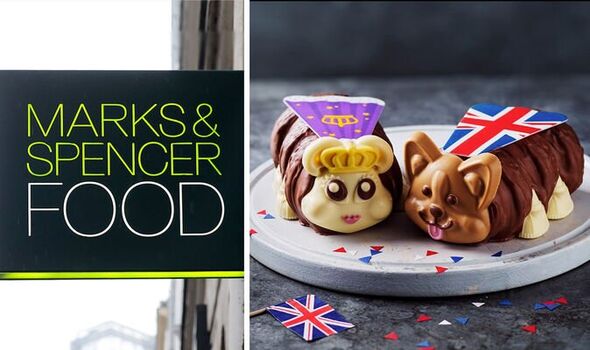 As if the original Colin the Caterpillar cake wasn’t cute enough, to celebrate Her Majesty the Queen’s Platinum Jubilee next month, Marks and Spencer have created two cakes fit for the Queen; a Union-flag covered Corgi cake and Jubilee Connie Caterpillar cake.

From tomorrow, customers will be able to get their hands on two new versions of the iconic Colin the Caterpillar cake.

M&S Food already diversified its range by introducing Connie the Caterpillar, but now they are including limited-edition Jubilee Connie and Corgi cakes.

The food store revealed the news on social media: “When you thought you’d seen it all … introducing Corgi meets Jubilee Connie the Caterpillar.

“Pick up these limited-edition treats in store from Tuesday 17 May!”

Fans were delighted with the news and rushed to the comments section with their thoughts.

One said: “Omg!! Look at the jubilee caterpillars.”

“How cute are these!” Someone else remarked.

While hundreds were excited, many M&S customers were asking for vegan or gluten-free options.

The cakes can be bought in an M&S Food store, or ordered online from Ocado.

Jubilee Connie and the Corgi come in a pack of two for £12.

They are two chocolate sponge rolls filled with chocolate buttercream, covered in milk chocolate with an edible cape.

Jubilee Connie has a white chocolate head with big eyelashes, pursed lips, a crown and a regal robe.

The Corgi, on the other hand, has a milk chocolate head with a pink tongue, perked ears and a Union Jack cape.

M&S Food is not the only food store to be selling a Jubilee-themed cake.

In honour of the Queen’s love for corgis, Morrisons is selling Clarence the Corgi cake which will join Morris the Caterpillar on shelves in stores nationwide on May 21.

The cake is a chocolate-covered swiss roll decorated with red, blue and white sprinkles to celebrate the Queen’s 70th anniversary on the throne. Clarence has a sweet edible face and boots with a Union Jack crown to top it all off.

The cake has been named ‘Clarence’ by customers following a competition on Morrisons’ Facebook page that attracted thousands of comments and suggestions.