Intermittent fasting has been heralded as a weight loss diet but Australian researchers have now discovered it can also bring separate benefits, supporting liver health and helping protect against disease.

In the study, published on Wednesday in the journal Cell Reports, researchers examined the effects of alternate-day fasting (24 hours of no food, followed by 24 hours of eating normally) on the organs and blood plasma of mice. 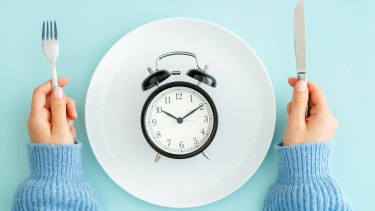 The beneficial effects of fasting may start in the liver.Credit:Getty

They found that a protein in the liver, called HNF4-(alpha), is blocked during fasting and this has a number of knock-on effects including improved metabolism of fat, improved blood glucose levels and lower levels of inflammation in the body.

“The liver is one of the key fasting response organs in the body,” explained lead author Dr Mark Larance, from University of Sydney's Charles Perkins Centre. “The liver acts as a sort of metabolic hub. It is the first organ we looked at because of its importance.”

When they took liver biopsies from the mice following intermittent fasting, they identified the effect on HNF4-(alpha), which acts as a “master regulator”, affecting metabolic processes.

“We’ve now been able to see these molecular changes in the liver and the metabolic changes that occur when you don’t have food available.”

One of those changes is that fats, which are sent by fat tissue into the liver and converted into fuel for the body to use, also act as a signalling mechanism, changing the way cells behave.

“The liver can see all the fat coming in and that can trigger things such as the regulation of lipid metabolism,” Larance said. “Our analysis suggests [when fasting] the liver was simultaneously synthesising fat but also trying to break it down.”

This may explain some of the beneficial effects of intermittent fasting, such as improved blood sugar levels, because lower levels of fatty acids can improve the body's ability to transport glucose into cells for energy.

It’s possible that eating less on a daily basis would elicit the same effect, however, Larance said intermittent fasting can be more sustainable for most people. Also, he added, the mice were given double quantities of food on eating days, which shows that the effects are not the result of weight-loss.

“It’s the fasting period itself that is causing the benefit, the molecular changes,” Larance said.

The ideal length of time to fast remains unclear.

“The line between alternate-day feeding or time-restricted feeding is a very grey area,” he said. “If you’re fasting for 16 hours you may have the same effect as 24 hours. We chose 24 hours… to standardise the intervention.”

Previous human studies into the effects of intermittent fasting are limited.

“Typically, in human studies pretty much the only sample you can get in order to understand the biology is blood and that can really limit our understanding of what’s going on,” Larance said.

“We chose to use mice because they are quite a good model in general for mammalian fasting responses. That enabled us to get a deeper understanding of the molecular changes in tissues and allows us to then use that knowledge in future human studies.”

A better understanding of the fasting response (“a core aspect of human physiology,” according to Larance) means researchers can figure out how to optimise fasting regimes in humans.

“It could make intermittent fasting in healthy humans more effective at preventing disease, but also for the treatment of those with a disease, we could optimise it.”

Miracle cat survives after ‘sick people’ shot him with 25 pellets