NASA has approved the Near-Earth Object Surveyor space telescope to help the space agency be better prepared for future asteroids that could pose a threat to Earth.

The 20-foot-long infrared telescope would help astronomers and planetary scientists find ‘most’ of the potentially hazardous asteroids and comets that come within 30 million miles of Earth’s orbit, also known as near-Earth objects (NEOs).

According to NASA, there are just over 25,000 NEOs, but many more are waiting to be discovered.

‘NEO Surveyor will have the capability to rapidly accelerate the rate at which NASA is able to discover asteroids and comets that could pose a hazard to the Earth, and it is being designed to discover 90 percent of asteroids 140 meters in size or larger within a decade of being launched,’ said Mike Kelley, NEO Surveyor program scientist at NASA Headquarters, in a statement. 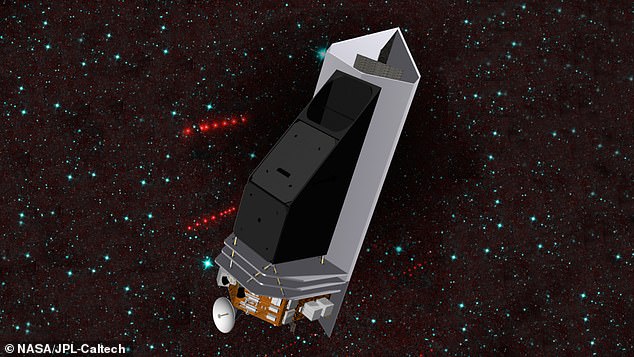 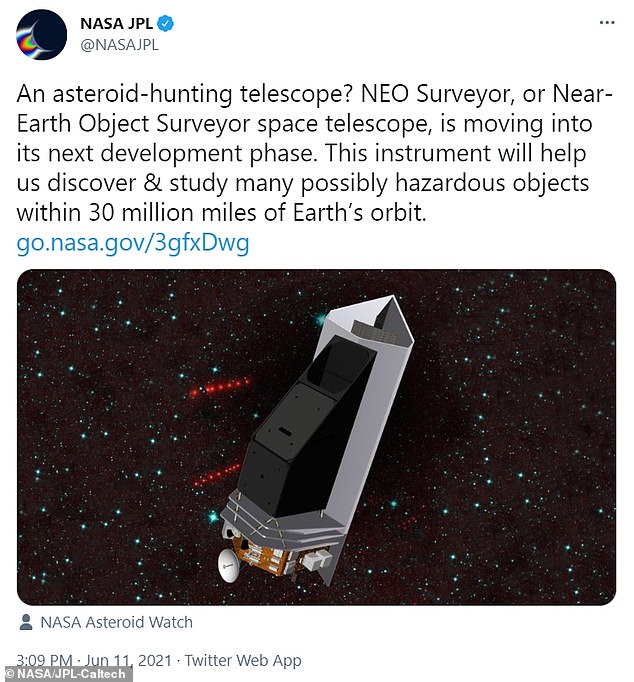 NASA has not yet revealed the cost of the space telescope or which contractor will build it.

DailyMail.com has reached out to the space agency with a request for comment.

It says it has found approximately 40 percent of NEOs within this range. An object that size crashing into Earth could potentially trigger an apocalyptic event.

‘Each night, astronomers across the globe diligently use ground-based optical telescopes to discover new NEOs, characterize their shape and size, and confirm they do not pose a threat to us,’ Kelly Fast, program manager for NASA’s NEO Observations Program, added in the release.

‘Those telescopes are only able to look for NEOs in the night sky. NEO Surveyor would allow observations to continue day and night, specifically targeting regions where NEOs that could pose a hazard might be found and accelerating the progress toward the Congressional goal.’

In 2018, NASA drew up a 20-page plan with detailed steps for the US to better prepare itself against NEOs that come within 30 million miles of the planet.

Although there are no known threats from ‘potentially hazardous’ NEOs for the next century, there have been unpredicted impacts, such as the 2013 Chelyabinsk event in Russia. 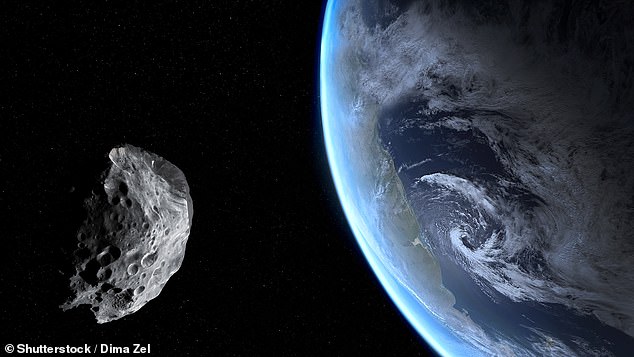 In 2010, NASA completed its goal to find NEOs that are more than 3,280ft (1,000m) across, but it was later directed by law to find objects that are larger than 459ft (140m). It says it has found approximately 40 percent of NEOs within this range

It became the largest object to hit Earth since the Tunguska blast of 1908.

The NEO Surveyor could help prevent events such as the meteorite in Chelyabinsk, Russia utilizing infrared sensors to help find NEOs faster.

This includes the ability to find ones that could approach Earth during the day from the direction of the Sun, something that is not yet capable from ground-based observatories.

‘By searching for NEOs closer to the direction of the Sun, NEO Surveyor would help astronomers discover impact hazards that could approach Earth from the daytime sky,’ said Amy Mainzer, survey director for NEO Surveyor at the University of Arizona.

The NEO Surveyor is scheduled to launch sometime in the first half of 2026, but the agency did not specify exactly when.

The US space agency is working towards deflecting asteroids with its Double Asteroid Redirection Test (DART) mission, scheduled for launch later this year.

In 2019, NASA awarded a $69 million contract to Elon Musk’s SpaceX to help with the DART mission.

This will be ‘the first-ever mission to demonstrate the capability to deflect an asteroid by colliding a spacecraft with it at high speed — a technique known as a kinetic impactor,’ according to the space agency.

The DART spacecraft will crash into Dimorphos (Greek for “having two forms”), an object that orbits the Didymos near-Earth asteroid, some time in 2022 and change its course slightly, altering it by one percent.

Explained: The difference between an asteroid, meteorite and other space rocks

An asteroid is a large chunk of rock left over from collisions or the early solar system. Most are located between Mars and Jupiter in the Main Belt.

A comet is a rock covered in ice, methane and other compounds. Their orbits take them much further out of the solar system.

A meteor is what astronomers call a flash of light in the atmosphere when debris burns up.

This debris itself is known as a meteoroid. Most are so small they are vapourised in the atmosphere.

If any of this meteoroid makes it to Earth, it is called a meteorite.

Meteors, meteoroids and meteorites normally originate from asteroids and comets.

For example, if Earth passes through the tail of a comet, much of the debris burns up in the atmosphere, forming a meteor shower.

Chelsea youth coach Neil Bath is the man behind club's academy, and has developed £500 million worth of amazing talent