NASA spacecraft that will launch to metal-rich asteroid Psyche ‘worth more than $10,000 quadrillion’ in 2022 will be powered by futuristic electric thrusters emitting a blue glow

NASA is sending a spacecraft with a futuristic propulsion system that emits a ‘cool blue glow’, to the metal-rich asteroid Psyche next year.

The spacecraft is being developed by NASA’s Jet Propulsion Laboratory in Pasadena, California, to explore the unusual rock, which some scientists believe may be the core of a long-destroyed planet from early in the history of the solar system.

Launching in August 2022, the spacecraft, also named Psyche, will travel about 1.5 billion miles in 3.5 years to get to the space rock, arriving in 2026.

To cover this great distance, Psyche will use solar electric thrusters and tanks full of xenon, the natural gas that is used in car headlights and plasma televisions.

The four thrusters will use electromagnetic fields to accelerate and expel charged atoms of xenon, and as they are expelled they produce thrust and a blue beam.

Psyche is thought to contain enough metal that if it could be transported back to Earth, the iron alone would be worth $10,000 quadrillion (£8,072 quadrillion).

Its value would be large enough to destroy commodity prices and cause the world’s economy – worth $73.7 trillion (£59.5 trillion) – to collapse. 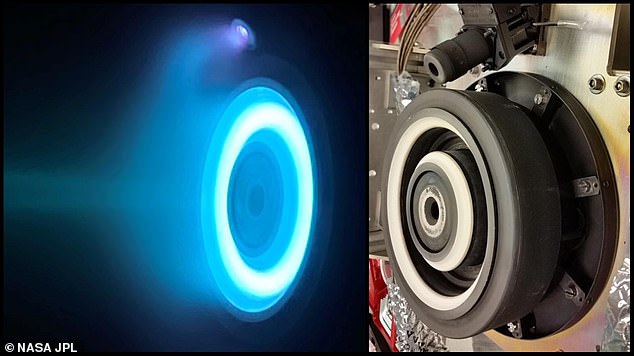 The photo on the left captures an operating electric Hall thruster identical to those that will propel NASA’s Psyche spacecraft, which is set to launch in August 2022 and travel to the main asteroid belt between Mars and Jupiter 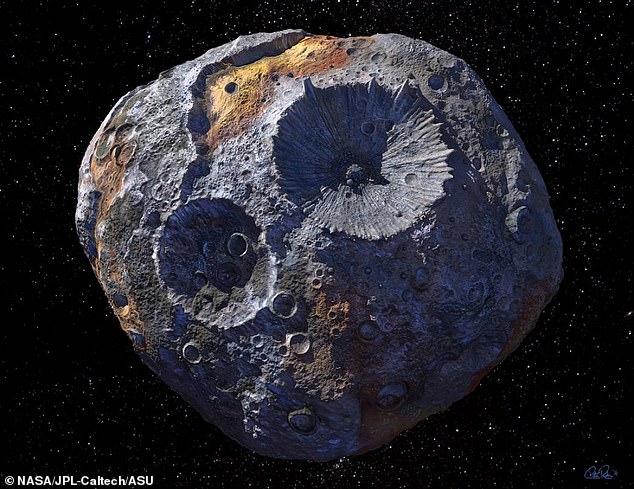 The first high-resolution measurements of the surface temperature of asteroid Psyche confirms it is packed full of $10,000 quadrillion worth of precious metal 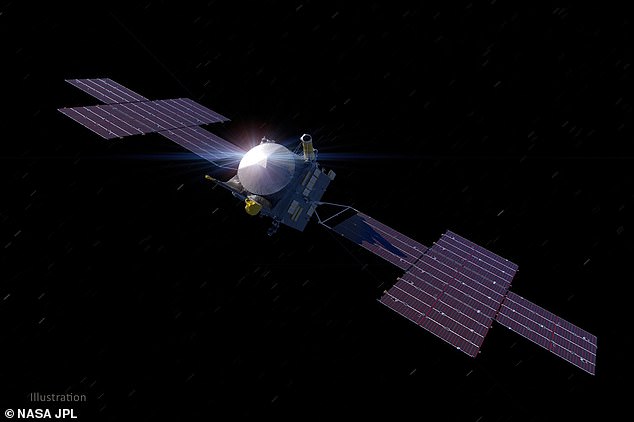 This technology, never used in a spacecraft going beyond the moon, produces a very gentle thrust.

This is about the same pressure you’d feel holding three 10p pieces, but despite the low pressure, it is enough to accelerate Psyche through deep space.

With no atmospheric drag to hold it back, the spacecraft will eventually accelerate to speeds of up to 200,000 miles/hour, helping it get to Psyche.

While the asteroid itself is 230 million miles from Earth, the total journey time will be 1.5 billion miles due to the need for ‘fly-bys’ to get a gravity assist from Mars on the way to the rock.

The spacecraft will rely on the chemical rocket engines of the SpaceX Falcon Heavy launch vehicle to blast off the launchpad and to escape Earth’s gravity.

But the rest of the journey, once Psyche separates from the launch vehicle, will rely on solar electric propulsion.

This form of propulsion starts with large solar arrays that convert sunlight into electricity, providing the power source for the spacecraft’s thrusters.

Known as Hall Thrusters, its propulsion system is so efficient it could operate nonstop for years without running out of fuel, according to NASA JPL.

Engineers working for NASA estimate that the mission would burn through about five times that amount of propellant if it had to use traditional chemical thrusters, adding they designed it with Hall Thrusters from the start.

‘Even in the beginning, when we were first designing the mission in 2012, we were talking about solar electric propulsion as part of the plan,’ said Lindy Elkins-Tanton, lead investigator on the mission for Arizona State University in Phoenix.

‘Without it, we wouldn’t have the Psyche mission,’ Elkins-Tanton said, adding ‘it’s become part of the character of the mission. It takes a specialized team to calculate trajectories and orbits using solar electric propulsion.’

Psyche will launch from the historic Pad 39A at NASA’s Kennedy Space Center in Florida, where it will first fly by Mars for a gravity assist in May 2023. 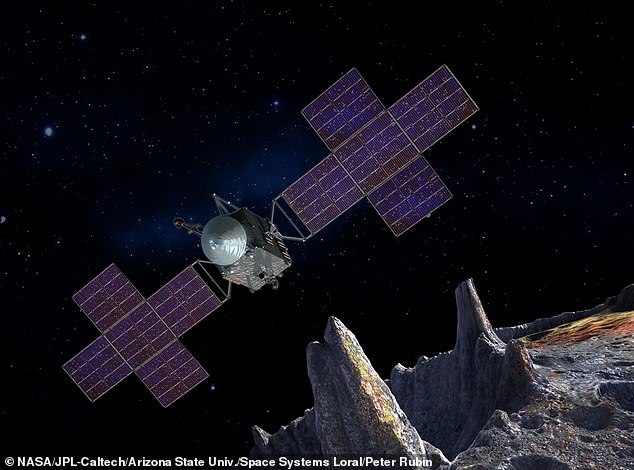 An artists’ depiction of what the 16 Psyche spacecraft will look like. It is slated to launch in August 2022

It is hoped this will help NASA in its mission due to launch next year and arrive at the rock in 2026, as it will have a more detailed starting point in its observations

Nasa plans to explore a $10,000 quadrillion asteroid that could cause the world’s economy to COLLAPSE

It may be 230 million miles (370 million km) away from Earth, but this asteroid could be worth a small fortune.

16 Psyche is one of the most mysterious objects in our solar system, and scientists could soon be getting a close-up view thanks to a newly confirmed Nasa mission.

If the asteroid could be transported back to Earth, the iron alone would be worth $10,000 quadrillion (£8,072 quadrillion).

It’s value would be large enough to destroy commodity prices and cause the world’s economy – worth $73.7 trillion (£59.5 trillion) – to collapse.

Lindy Elkins-Tanton the lead scientist on the Nasa mission and the director of Arizona State University’s School of Earth and Space Exploration, said: ’16 Psyche is the only known object of its kind in the solar system, and this is the only way humans will ever visit a core.

‘We learn about inner space by visiting outer space.’

Assuming the market for asteroid materials is on Earth, this could cause the value of precious metals to plummet, completely devaluing all holdings including those of Governments, and all companies involved in mining, distributing and trading such commodities.

Ultimately, it could lead to the collapse of the entire economy.

‘That task will be especially tricky because of how little scientists know about the asteroid, which appears as only a tiny dot of light in telescopes,’ the team said.

Ground-based radar suggests it’s about 140 miles (226 kilometers) wide and potato-shaped, which means scientists won’t know until they get there how exactly its gravity field works, making orbital insertion particularly difficult.

As the mission conducts its science investigation over 21 months, navigation engineers will use the electric propulsion thrusters to fly the spacecraft through a progression of orbits that gradually bring it closer and closer to Psyche.

NASA used a similar system with the agency’s Deep Space 1, which launched in 1998 and flew by an asteroid and a comet before the mission ended in 2001.

Next came Dawn, which used solar electric propulsion to travel to and orbit the asteroid Vesta and then the protoplanet Ceres.

The first spacecraft ever to orbit two extraterrestrial targets, the Dawn mission lasted 11 years, ending in 2018 when it used up the last of the hydrazine propellant.

Maxar Technologies, responsible for building the chassis and propulsion system, has been using solar electric propulsion to power commercial communications satellites for decades – but deep space travel required some adjustments.

They needed to adapt the superefficient Hall thrusters to fly in deep space, and that’s where JPL engineers came in.

Both teams hope that Psyche, by using Hall thrusters for the first time beyond lunar orbit, will help push the limits of solar electric propulsion.

When fully assembled, the Psyche spacecraft will move into JPL’s huge thermal vacuum chamber for testing that simulates the environment of deep space.

Once in orbit, the mission team will use the payload of science instruments to investigate what this unique target can reveal about the formation of rocky planets like Earth, Venus, Mars and even yet undiscovered exoplanets.

Scientists think that Psyche, unlike most other asteroids that are rocky or icy bodies, is made up of mostly iron and nickel — similar to Earth’s core.

The Psyche team will use a magnetometer to measure the asteroid’s magnetic field.

A multispectral imager will capture images of the surface, as well as data about Psyche’s composition and topography.

Spectrometers will analyze the neutrons and gamma rays coming from the surface to reveal the elements that make up the asteroid.

THE METAL WORLD OF  16 PSYCHE

16 Psyche is located in the large asteroid belt between Mars and Jupiter, and may have started as a planet, before it was partially destroyed during the formation of the solar system.

Now, it is a 130 mile (200km) wide chunk of metal, made up of iron, nickel and a number of other rare metals, including gold, platinum and copper.

As such, it offers a unique look into the violent collisions that created Earth and the terrestrial planets.

The mission team seeks to determine whether Psyche is the core of an early planet, how old it is, whether it formed in similar ways to Earth’s core, and what its surface is like.

The spacecraft’s instrument payload will include magnetometers, multispectral imagers, and a gamma ray and neutron spectrometer.

Why are asteroids worth so much?

It may be 230 million miles (370 million km) away from Earth, but this asteroid could be worth a small fortune.

16 Psyche is one of the most mysterious objects in our solar system, and scientists could soon be getting a close-up view thanks to a newly confirmed Nasa mission.

If the asteroid could be transported back to Earth, the iron alone would be worth $10,000 quadrillion (£8,072 quadrillion).

It’s value would be large enough to destroy commodity prices and cause the world’s economy – worth $73.7 trillion (£59.5 trillion) – to collapse.

Assuming the market for asteroid materials is on Earth, this could cause the value of precious metals to plummet, completely devaluing all holdings including those of governments, and all companies involved in mining, distributing and trading such commodities.

Is M&S open today and can I order online? Coronavirus opening hours – The Sun