The New Zealand National Emergency Management Agency has urged people living along the coast of northern New Zeland to immediately move to high ground. People have been told to move as far inland as possible and to not stay home. The warning comes after a powerful earthquake struck the subtropical island arc of Kermadec Islands in the South Pacific. 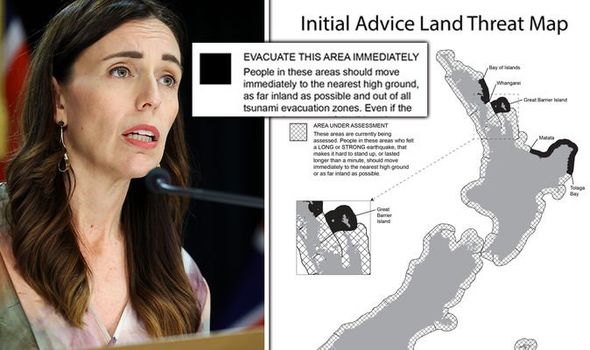 The tsunami warning is now in place from the Bay of Islands to Whangarei, from Matata to Tolaga Bay, and from Great Barrier Island.

Even if the earthquake was not felt, there is a chance the resulting tsunami could still affect coastal areas.

“People near coast from the BAY OF ISLANDS to WHANGAREI, from MATATA to TOLAGA BAY, and GREAT BARRIER ISLAND must MOVE IMMEDIATELY to nearest high ground, out of all tsunami evacuation zones, or as far inland as possible.”

People affected by the tsunami warning have been urged not to return home until given the all-clear by New Zealand’s Civil Defence.

Fleeing locals have also been told to run, walk or cycle away from the affected danger zones to avoid being stuck in traffic.

Experts predict the first wave will not be the largest and tsunami activity may go on for hours.

The New Zealand National Emergency Management Agency said: “People who are near the coast in the AREAS UNDER THREAT listed above or near the coast and felt the earthquake LONG OR STRONG, should MOVE NOW.

“DO NOT WAIT for an Emergency Mobile Alert to your mobile phone.

“Move to the nearest high ground, out of tsunami evacuation zones, or as far inland as possible.”

A magnitude 6.9 earthquake rocked New Zealand earlier today at about 3.27am local time.

The tremor was originally reported at magnitude 7.2 but was later downgraded to 6.9

THIS IS A BREAKING STORY