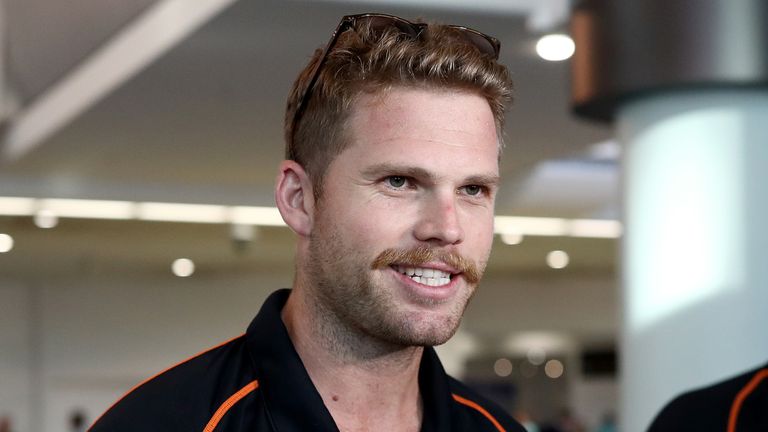 New Zealand seamer Lockie Ferguson says he suffered from a “very, very mild cold” after being forced to self-isolate on the Black Caps’ postponed tour of Australia amid coronavirus fears.

Ferguson reported a sore throat on Friday and was sent for COVID-19 tests and quarantined in his hotel room in Sydney before being given the all clear.

Speaking on his return to New Zealand after the ODI series against Australia was suspended, Ferguson said: “I got a few texts on Saturday but I was quick to announce that it was only a few cold symptoms.

“It was probably a bit over-exaggerated as to how I was. I just sort of had very, very mild cold symptoms and I had a day in the hotel room by myself. “The procedures were as they were and followed by Tommy [New Zealand physio Tommy Simsek] and the support staff. It was completely understandable.

“From my point of view, I just thought it was normal small cold symptoms. I get quite rundown from time to time playing cricket and travelling a bit, so it is not too unusual for me.

“But Tommy and the doctors followed procedure as is needed. It’s been 24 hours in isolation but that’s okay and I actually felt good the next day I woke up. I was fine.”

Ferguson had picked up two wickets in the first ODI in Sydney – which was played behind closed doors – but New Zealand slipped to a 71-run defeat after being rolled for 187 in reply to Australia’s 258-7.

Thoroughly enjoyed rolling back the ages in the teal! Hope it’s not the last time we don these delightful colours, but health always comes first. Stay safe out there kids

Thoroughly enjoyed rolling back the ages in the teal! Hope it’s not the last time we don these delightful colours, but health always comes first. Stay safe out there kids

“It was strange playing the game under the circumstances and with an empty crowd,” Ferguson added. “That was an odd experience. At the same time, we were a little bit disappointed with how the game ended up.

I Tried a Scalp Facial, and My Head Will Never Be the Same