Nutritionist reveals the incredible medicinal properties of common foods like garlic, coffee, and aloe as she encourages people to use plants – not drugs – to stay healthy

A nutritionist is touting the health properties of common plants and herbs online while encouraging people to use whole foods as medicine.

Sheela Mahdavi, founder of Food Over Drugs, is using TikTok to educate the masses on how a number of natural foods and spices such as garlic, coffee, and blueberries can help treat certain ailments and possibly prevent disease.

The 28-year-old health guru from California started posting the videos earlier this month, and so far she has featured informational clips on everything from oregano to aloe. 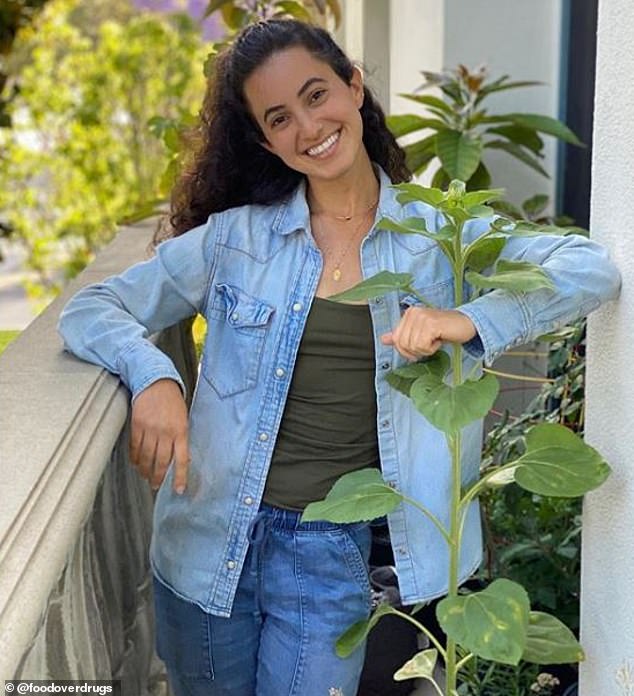 Health guru: Nutritionist Sheela Mahdavi is using TikTok to educate the masses on how a number of natural foods can help treat certain ailments and possibly prevent disease 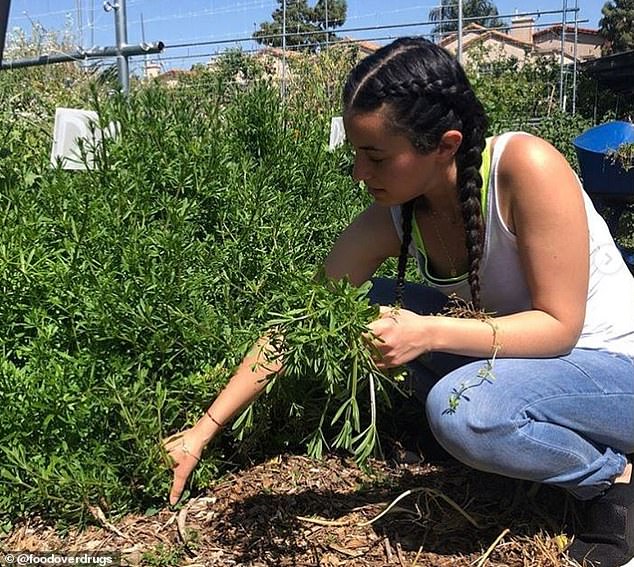 Goal: Mahdavi is the founder of Food Over Drugs, a company that ‘stands to educate and shift society back into the use of whole foods and plants as medicine’

In each video, she details the food’s medicinal properties while advising how to integrate it into your diet or health routine.

According to her website, her company ‘stands to educate and shift society back into the use of whole foods and plants as medicine.’

She has helped ‘numerous clients from around the world heal from various conditions through the use of herbal medicine and plant-based diet protocols.’

Mahdavi offers treatment formulas on her website that are ‘handmade in small batches using 100 per cent organic and wild-crafted herbs.’

Her formula for cystic acne is being sold for $30 for 30 capsules and features saw palmetto berry, burdock root, and milk thistle, among other herbs.

What it does: Mahdavi explains in her video that ginger is most commonly used for stomach aches, nausea, and aiding with digestion.

‘It increases the release of bile and digestive enzymes, which helps you better break down your food,’ she says. ‘It’s also anti-bacterial and anti-fungal, which is useful for overgrowth or infections in the GI tract.’

Mahdavi adds that ginger is even useful for relieving gas or headaches as well as enhancing circulation around the body and — for women — the reproductive organs.

At the end of the video, she notes that some studies have shown that ginger has the ability to kill cancer cells, However, it has yet to be proven to be a viable cancer treatment in humans.

How to use it: The nutritionist recommends brewing it as a tea, juicing it, or adding it to your favorite foods 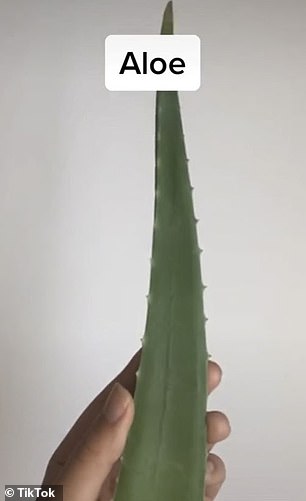 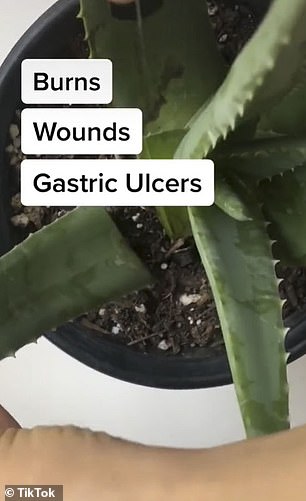 For more than just sunburns: ‘Aloe is anti-inflammatory, helps clear acne, and it protects the skin from UV damage,’ Mahdavi says, but she notes it can also alleviate constipation

What it does: Anyone who has suffered from sunburn knows that aloe is used to heal the skin from burns and wounds.

‘Aloe is anti-inflammatory, helps clear acne, and it protects the skin from UV damage,’ Mahdavi says, but she notes it can also be used internally.

It may also be an effective remedy against stomach ulcers. Past studies have shown promising results, though more studies need to be done on humans.

Mahdavi points out in her video that whole aloe is different than the aloe gel that is typically found in the store.

‘Whole aloe contains a bitter yellow layer of latex that kind of looks like sap, which is the active compound that induces a bowel movement,’ she explains.

How to use it: The detoxification special says it’s always best to use when it’s fresh, adding: ‘Grow it, harvest it, and use it as needed.’ 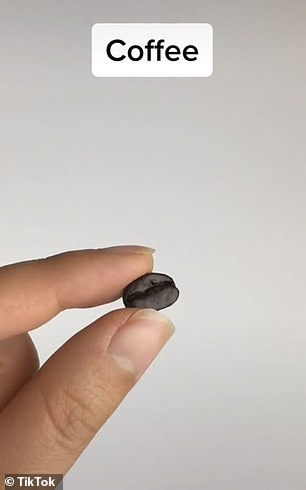 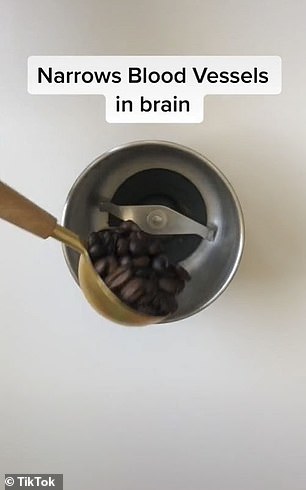 Need a jolt? Mahdavi explains that the caffeine in coffee ‘narrows blood vessels in the brain, which helps you think more rapidly and clearly’

What it does: Plenty of people rely on coffee to give them a boost in the morning, but they may not realize why the caffeine serves as a jolt to their senses.

‘Caffeine narrows blood vessels in the brain, which helps you think more rapidly and clearly,’ Mahdavi explains. ‘Elsewhere in the body, caffeine expands the blood vessels, which enhances coordination and performance.’

The average cup of coffee has about 95 milligrams of caffeine in it, and peak stimulation hits between 15 and 45 minutes after consumption.

Mahdavi notes that coffee also opens up the bronchial tubes in the lungs, which assists with asthma and relieving congestion.

How to use it: Have a cup of coffee in the morning or whenever you need a jolt of energy. According to ASAP Science, the best time to drink coffee is between 10 a.m. and noon and between 2 and 5 p.m. 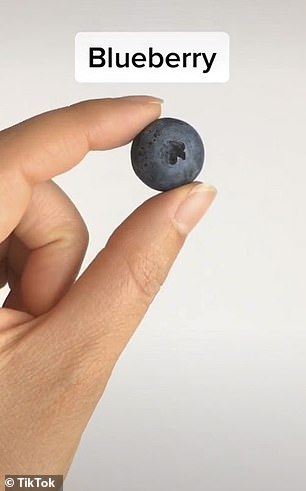 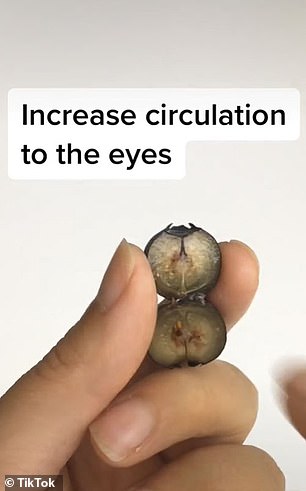 Did you know? Mahdavi says blueberries are anti-inflammatory, anti-oxidative, and are also known for increasing circulation to the eyes

What it does: Mahdavi says blueberries are one of the most nutrient-dense of berries you can eat.

They are anti-inflammatory, anti-oxidative, and they may also reduce histamine release, which is helpful in treating allergies.

‘Blueberries are known for increasing circulation to the eyes, which can help improve eyesight and help prevent night blindness,’ she adds.

How to use it: Eat blueberries by the pint or add them to your favorite smoothie 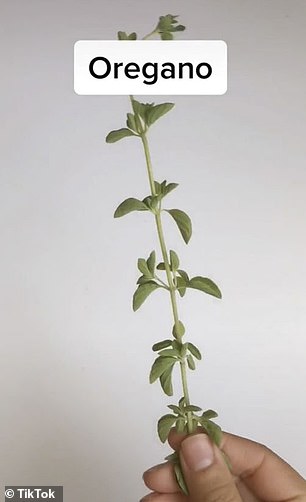 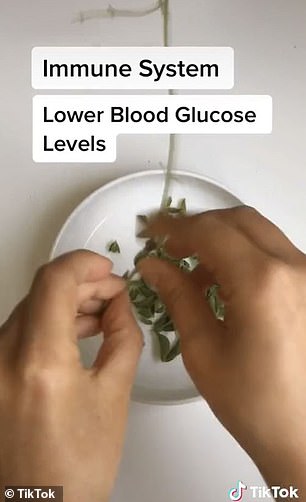 Not just for cooking! Mahdavi says oregano has been shown to stimulate the immune system and lower blood glucose levels. It can be also used for digestion, bronchitis, and asthma

What it does: Oregano is a key ingredient in a number of Italian dishes, but the herb also has a wide range of medicinal purposes.

Mahdavi says it has been shown to stimulate the immune system and lower blood glucose levels. It can be used for digestion, bronchitis, and asthma.

‘Oregano is anti-bacterial, anti-fungal, and anti-viral,’ she explains, noting it is useful for colds, flu, fever, and infections.

However, there is no data that proves oregano helps colds or flu despite the number of people who swear by it.

How to use it: ‘If you’re using pure oregano oil, make sure you dilute it before you ingest it and apply it on the skin,’ Mahdavi advises. ‘No more than just one drop is needed.’ 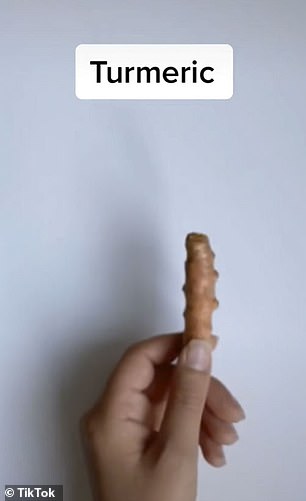 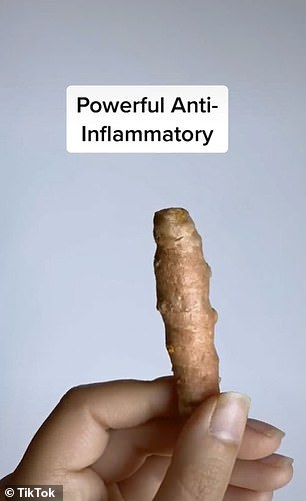 Benefits: Turmeric is a powerful anti-inflammatory that helps regulate the immune system, according to the nutritionist

What it does: Mahdavi says turmeric is a powerful anti-inflammatory that helps regulate the immune system.

The spice is touted as having positive effects on arthritis as well as stomach, skin, liver, and gallbladder issues.

Mahdavi notes that it has also been shown to prevent or delay Alzheimer’s disease and certain cancers, though there is insufficient evidence that proves it is a viable treatment for either.

How to use it: ‘All of these benefits come with turmeric whether you use it fresh or dried, cooked or raw,’ Mahdavi says. ‘Add it to your favorite food and enjoy.’ 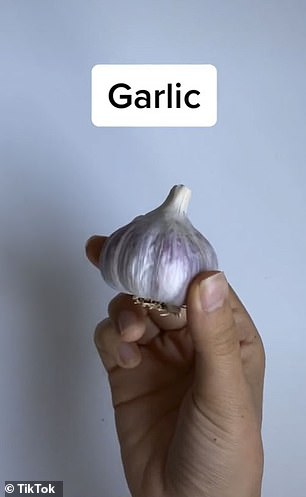 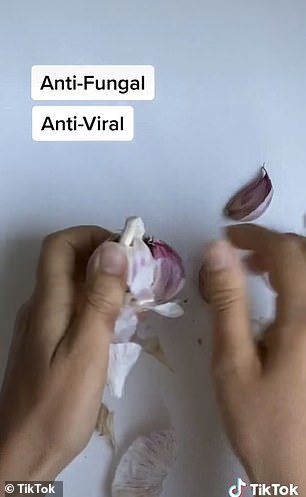 Good to have: Mahdavi says garlic is anti-fungal, anti-viral, and anti-bacterial. It can also be used to lower blood pressure

What it does: Mahdavi says garlic is anti-fungal, anti-viral, and anti-bacterial, which makes ‘it perfect for when you are sick.’

‘Garlic can be used to lower blood pressure or to decrease plaque in the arteries, which are both helpful in preventing heart disease,’ she notes. ‘It can also be used for prevention of stomach cancer and colon cancer.’

The National Cancer Institute reports that data from seven population studies have shown ‘that the higher the amount of raw and cooked garlic consumed, the lower the risk of stomach and colorectal cancer,’ as well as intestinal cancer.

Mahdavi also cites research suggesting that garlic can be used for intestinal parasites and to treat infections of the GI tract and lungs.

How to use it: Garlic can be used to flavor a number of foods in a variety of different ways, whether it’s fresh or dried, cooked or raw.

Spoilers: Aaron Brennan to destroy hopes of being a father in Neighbours?