Victorian Opera has revived a plan to build a major new performance and development hub in Melbourne after recording a bumper $2.5 million profit from its pandemic-stricken 2020.

The windfall, thanks to JobKeeper and the savings made from not being able to mount expensive operas, has allowed the company to reconsider a plan abandoned in 2018 to move to a new purpose-built headquarters. 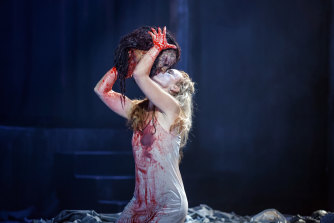 Victorian Opera’s Salome, Vida Mikneviciute gets up close and personal with John the Baptist.Credit:Craig Fuller

It comes as other major arts organisations, including Melbourne’s and Sydney’s symphony orchestras, also report surprise profits from a year of limited performances.

VO was forced to cancel all its 2020 productions save one, Salome, which finished shortly before the pandemic hit. As a result, according to its annual report, the organisation saved more than a million dollars in production expenses, and hundreds of thousands more in related administrative, marketing and personnel costs.

“We’re not reliant on the box office, so not building the operas and not needing to secure the artists meant that we didn’t spend the grant money that we were allocated,” chief executive Elizabeth Hill-Cooper said. “JobKeeper was [also] a great benefit.”

The company received $670,000 from the federal JobKeeper scheme, on top of its annual $3.8m from the Victorian government and $660,000 from the Australia Council. Many audience members also donated the cost of their tickets to cancelled performances, according to financial statements posted online.

As a result VO’s total 2020 income was only slightly less than its 2019 income, despite an 88 per cent collapse in box office takings. Meanwhile, its costs fell dramatically, resulting in a calendar year surplus of nearly $2.6 million, compared to under $500,000 the year before. It had budgeted, before the pandemic, for a surplus of $181,000.

Hill-Cooper said the company kept all employees on the books on full pay throughout the shutdown. They set up a voluntary “Pay it Forward scheme” in which staff sacrificed salary into a fund that was distributed to VO’s “artistic family”, artists and other workers who were not employees.

The company also developed online content to employ “arts workers across the sector that were essentially jobless and struggling with the basics such as paying their rent”.

According to the 2020 annual report, the company set aside $1.4 million from its cash windfall into a “special reserve… with the aim of utilising it to contribute towards a potential premises project if the board takes a decision to relocate from its existing location”. 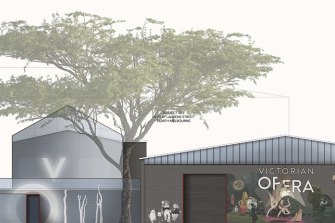 In 2018, VO decided to relocate to a new headquarters in Laurens St, West Melbourne, which they paid to lease and commissioned an initial architectural vision to rebuild the site. However the decision was quickly reversed after it became clear the company couldn’t afford it, and previous annual reports reveal this cost the company almost $700,000. The 2020 report adds another $10,000 of net losses on the Laurens St project, compared to $16,000 the year before.

Hill-Cooper said the lease for the current Horti Hall premises was up for renewal, and they have again begun a search for a possible new home. 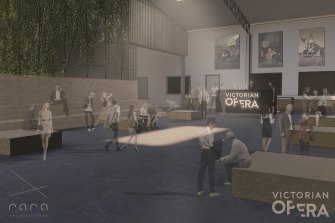 Though the Laurens St premises is now unusable, as it’s been sublet to a grain storage company, they hope to find an alternative which would fulfill the same aims, and which they could open up to more people from the opera and arts community.

“It’s an opportunity to find a space where more artists can practice their art, under our roof, and be supported by us,” Hill-Cooper said.

Most Viewed in Culture

The 20 Biggest Boy Bands of All Time

‘A compelling character’: Simone Biles to star in new behind-the-scenes docuseries ahead of Olympics