Home » Lifestyle » Overworked and burdened, death of a magistrate in a judiciary under pressure

A highly respected Melbourne magistrate who took his own life was troubled by the impact government decisions had on sentencing, was burdened by his workload and under pressure from the media about his decisions.

The coronial findings released on Friday into the 2018 death of magistrate Stephen Myall stopped short of making recommendations, saying his death had already contributed to significant changes by the court to safeguard the mental health of the judiciary. 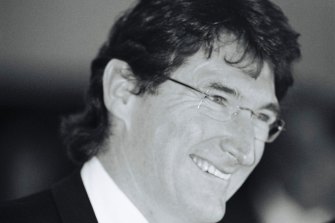 Mr Myall’s suicide was one of three deaths in recent years among people working in Victoria's courts, which have experienced a 25 per cent increase in workload year on year. The 2017 death of magistrate Jacinta Dwyer and the 2019 death of court clerk Ashleigh Petrie are still subject to coronial investigations.

Mr Myall, a 59-year-old husband and father, rose to become a magistrate in Broadmeadows, Geelong, Werribee and Sunshine, after working as a legal aid lawyer and private practice solicitor.

Coroner Ian Guy said Mr Myall’s focus was on improving the justice system, especially for the disadvantaged, and he often agonised over the decisions he made in court.

The magistrate also faced an ever-increasing court workload, and spoke to his wife of being “smashed” at work, presiding over more than 90 cases a day.

“There were discussions with some colleagues [about] how exhausted they were from the day’s work and the burden of actually dispensing justice in busy lists,” the coroner said.

He was troubled by the impact legislative changes were having on the discretion magistrates had in sentencing and the subsequent incarceration rates, funding issues and the ability of lawyers to represent defendants in court.

Mr Guy said Mr Myall also felt under pressure from the media in cases he heard, particularly in the week he died.

In March 2018, six days before his death, there was significant criticism in the media of Mr Myall’s decision to adjourn the charges against a youth offender for assaulting police so the teenager could complete his year 12 exams.

His wife Joanne Duncan said he felt pressure from the media in every case he heard, and the prospect of an appeal from his decisions weighed on him heavily, according to the coroner.

Mr Guy said it was not possible to identify the extent to which one or more of those stress factors had contributed to his death. “The main reason for Stephen’s stress was his work, which he also loved,” Ms Duncan told the coroner.

Chief Magistrate Lisa Hannan said in a statement that Mr Myall had been a dear and cherished colleague, and his legacyincluded a strengthened focus on judicial wellbeing across the legal sector.

“Following his death, a great number of people turned their attention to wellbeing and acknowledged its importance,” Judge Hannan said.

“It is a central component of how the Magistrates Court works, and I continue my commitment to embedding a positive culture that promotes health and wellbeing across the court.”

An internal report into the health and safety of the court, finalised in 2019, said since 2016, there had been a year-on-year 25 per cent increase in daily court lists and workloads in sitting times.

The report called for limits on the number of cases listed on any given day among several recommendations.

Programs on wellbeing have been rolled out to courts, and then chief magistrate Peter Lauriston issued directions to court staff to keep sittings between 10am and 4pm. The current chief, Judge Hannan, is reviewing workloads to explore different approaches to reduce pressure, including sharing some of a magistrate’s work with judicial registrars and having Melbourne magistrates appearing over video to the country to support regional magistrates.

“The changes made and those to be made to improve judicial wellbeing by the Magistrates Court of Victoria…are both timely and significant. I do not consider any meaningful recommendations under the act can be made,” Mr Guy said.

Bethenny Frankel Shares Rare Video of Daughter Bryn, 10, on the Way to Her First Day of School