Cardinal George Pell will be freed from jail after the High Court overturned his conviction for historic child sex offences.

The stunning High Court intervention in Australia’s most contentious case of alleged clergy abuse will reverberate from Canberra to the Vatican and among abuse survivors in Melbourne and Ballarat.

It will also trigger a searing examination of how Victoria’s criminal justice system allowed the case against Cardinal Pell to proceed so far on evidence which, according to the unanimous view of all seven High Court judges, could not support a guilty verdict. 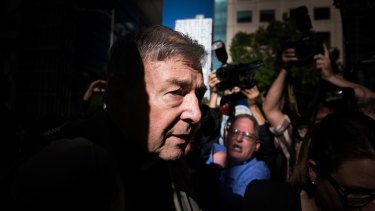 "The jury, acting rationally on the whole of the evidence, ought to have entertained a doubt as to the applicant's guilt with respect to each of the offences for which he was convicted,'' the court said in a summary judgment published today.

The court found there was a "significant possibility" an innocent person has been convicted.

The High Court judgment, although a relief to 78-year-old Pell, leaves Australia’s most senior Catholic facing an invidious task to restore his reputation.

The end of criminal proceedings clears the way for the federal government to publish previously redacted royal commission findings into Pell’s conduct in Ballarat, the epicentre of historic church sex abuse.

The findings are expected to be highly critical of Pell’s failure, alongside other figures in the church in the 1970s and 80s, to stop the abuse after he learned it was happening.

Cardinal Pell and the church are also facing a fresh wave of civil legal action by abuse survivors.

The High Court decision does not repudiate Pell’s accuser, a former choir boy who testified that he and a friend were allegedly indecently assaulted more than 20 years ago by Pell, then Archbishop of Melbourne, at St Patrick’s Cathedral.

Pell’s senior counsel Bret Walker SC and Victoria’s Director of Public Prosecutions Kerri Judd QC agreed in their submissions to the court that the choirboy was a credible, believable witness.

Rather, the decision exposes flaws within the rest of the prosecution case; evidence given by other witnesses at St Patrick’s at the time which raised doubts about whether Pell had an opportunity to commit the crimes he was accused of.

The High Court found this evidence should have caused a jury to have reasonable doubt about Pell’s guilt. It should also have caused the Court of Appeal majority, Chief Justice Anne Ferguson and Court of Appeal President Christ Maxwell, to have misgivings about the jury’s verdict.

"While the Court of Appeal majority assessed the evidence of the opportunity witnesses as leaving open the possibility that the complainant's account was correct, their Honours' analysis failed to engage with the question of whether there remained a reasonable possibility that the offending had not taken place," the court found.

Supreme Court Justice Mark Weinberg, in a lengthy dissenting judgment, described the testimony of the "opportunity witnesses" as "a significant body of cogent evidence casting serious doubt upon the complainant’s account."

The former choirboy first told police in 2015 that he and a fellow chorister were indecently assaulted by Pell in 1996 after he caught them drinking altar wine in the priest’s sacristy shortly after Sunday mass.

The second choir boy died of a drug overdose in 2014, having previously denied to his mother that he was abused by Pell.

Pell was convicted in December 2018 on one charge of sexual penetration of a child and four charges of an indecent act against a child. He was sentenced to six years in jail, with a minimum of three years and eight months.

Separate criminal proceedings against Pell, based on allegations by multiple witnesses that he sexually abused them at a Ballarat swimming pool nearly 50 years ago, were discontinued by the DPP.

Pell’s case before the High Court was that it was not open to a jury, on the whole of the evidence, to find him guilty as charged, and that the Victorian Court of Appeal majority erred in law by upholding the verdict.

Mr Walker told the court that the approach taken by justices Ferguson and Maxwell, in weighing the testimony of the choir boy against other evidence in the case, had the effect of reversing the onus of proof.

This argument was rejected by Ms Judd, who submitted that the Court of Appeal majority properly reviewed the evidence and had left no question of law for the High Court to resolve. Ms Judd submitted to the court that, in the event of a successful appeal, the case should be remitted back to the Court of Appeal to be heard again.

Instead, the High Court ordered Pell's conviction be quashed.

Pell learned of the decision from inside his isolation cell at Barwon prison, home to some of the state’s most dangerous murders and terrorists.

He walks out having served more than a year behind bars for crimes he never should have been convicted of.

Life after death: Near-death experiences emphasize the need for ‘meaning in life’