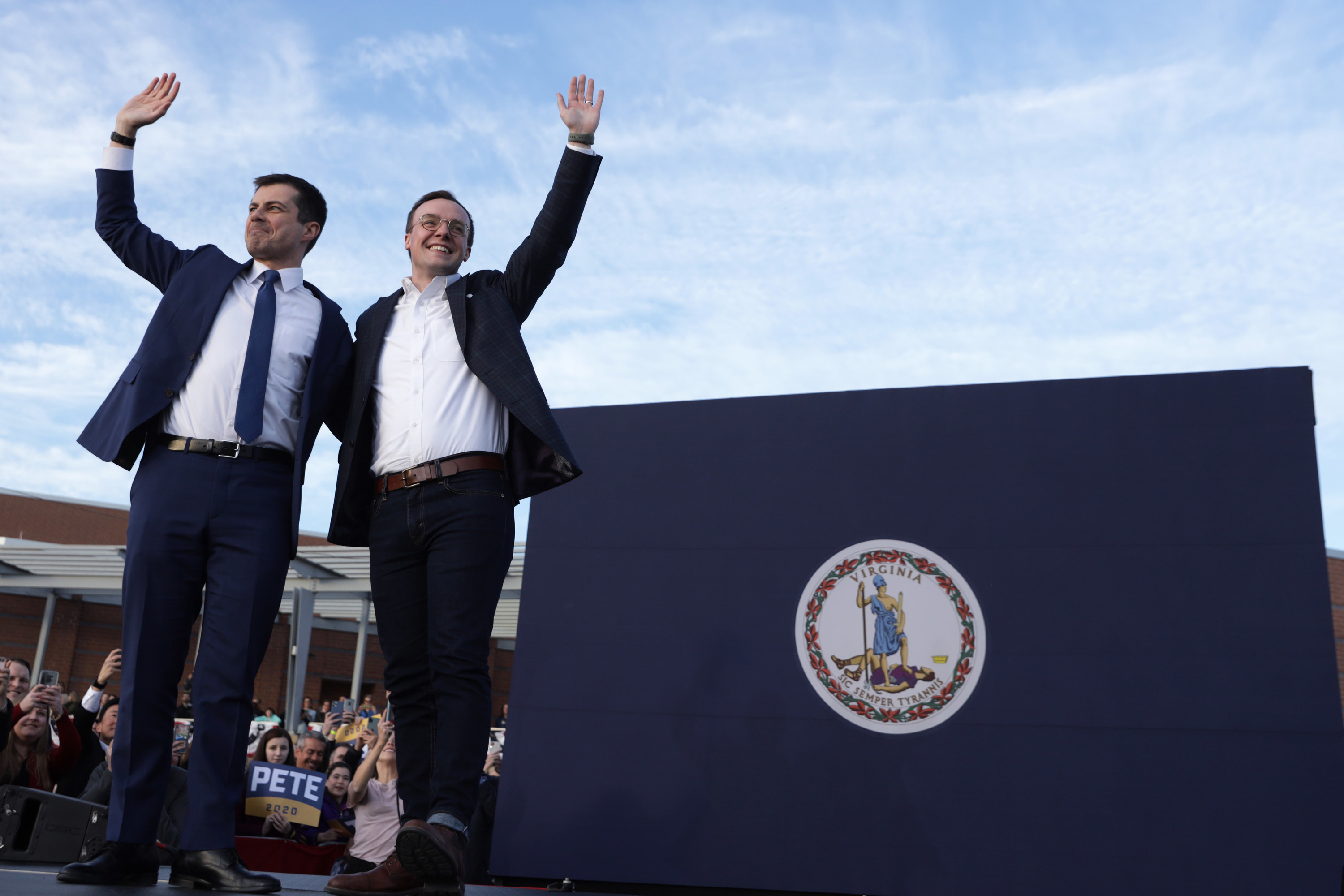 Pete Buttigieg ended his presidential campaign the same way that he had started it: with his husband at his side. For the first time, an openly gay candidate had made a serious run for the White House.

Pete and Chasten Buttigieg made waves when they kissed on stage the day they got into the race — an image that in so many ways announced the new era Buttigieg was, in the words of his campaign slogan, trying to win.

Soon they appeared together on the cover of Time magazine under a simple headline: First Family. And on Sunday night, as the campaign came to a close in South Bend, Indiana, they kissed again, after Chasten offered a stirring tribute.

“On my way to find Pete, after falling in love with Pete, Pete got me to believe in myself again,” Chasten said. “And I told Pete to run because I knew there were other kids sitting out there in this country who needed to believe in themselves, too.”

“We sent a message,” he said, “to every kid out there wondering if whatever marks them out as different means they are somehow destined to be less than, to see that someone who once felt that exact same way can become a leading American presidential candidate with his husband at his side.”

LGBTQ activists and advocates, and even for some of Buttigieg’s critics in the gay community, were quick to mark his candidacy as a sign of progress: someone who had broken barriers and opened not just minds, but avenues.

“Never in my life did I believe we would see a viable gay candidate for president,” Rufus Gifford, a top Democratic fundraiser who backs former vice president Joe Biden for president, told BuzzFeed News. “From the moment he entered the race he touched lives, perhaps none more than the young LGBT people around the world who saw in him their hopes and dreams.”

“He broke ground,” Gifford added. “He changed minds. He will never be forgotten. But we haven’t seen the last of him.”

Annise Parker, the former mayor of Houston and the head of Victory Fund, which supports LGBTQ candidates, was among Buttigieg’s core endorsers. She was expected to be among Buttigieg’s surrogates this week as the Democratic primary shifted to Texas and other Super Tuesday states.

“He’s changing the lives of young LGBT people because he’s in the race, but he’s changing the possibilities for our candidates, as well,” Parker said in an interview Sunday night. “There’s definitely a Pete effect, where people say, ‘Look at how he’s doing, look at how he’s being received. It’s not a positive that he’s openly LGBT, but it’s not necessarily a negative, but if he can do it, I can do it.’ We see that all across the country.”

Rep. David Cicilline, a Rhode Island Democrat who as mayor of Providence was the first openly gay mayor of a state capital, said Buttigieg’s candidacy “moved our entire country forward.”

“We should all take a moment to appreciate the historic significance of the Buttigieg campaign,” Cicilline, who did not endorse in the primary, said in a statement to BuzzFeed News. “An openly gay mayor of a small Midwestern city won the Iowa caucus and established himself in the top tier of presidential candidates this year.”

Buttigieg, a military veteran with a background in business consulting, had presented himself as a more moderate voice in the Democratic field, and several of his LGBTQ supporters said Sunday they appreciated how his exit could help moderate Democrats consolidate their support around a single candidate.

“I expect his decision is not about what’s good for him, but what’s good for the country,” Rich Eychaner, a top Buttigieg donor from Iowa, wrote via email. “As a soldier he knows the ultimate victory supersedes any one life. I hope he throws his support behind VP Biden so the party can emerge with a centrist to win in November and begin to heal our country.”

Buttigieg’s milder brand of politics was not universally admired in the LGBTQ community. Some activists criticized him for being too fixated on the fight for marriage equality — a battle already won, and one that doesn’t necessarily speak to the needs of some of the community’s most vulnerable. And Buttigieg further antagonized some advocates by initially declining an invitation to address a major LGBTQ forum in Iowa last year and by criticizing LGBTQ media.

Drew Anderson, a Democratic strategist and LGBTQ activist in Indiana, is among those who found himself disappointed with Buttigieg’s candidacy at times. Like others, he felt the former mayor could have done more to advance the movement’s causes, particularly with regard to racial and social justice issues.

“We need to be reflective of how inclusive we’re portraying the movement to be,” Anderson said Sunday. “The movement needs to really back up their commitment to inclusivity and intersectionality.”

“When you analyze Pete Buttigieg’s candidacy,” he said, “one thing to note is how great of a role model he was for LGBTQ youth. It really gives those young kids someone to look up to.”

Anderson also has some ideas for Buttigieg’s future: a run for governor of Indiana.

Buttigieg’s only past run for statewide office — for treasurer in 2010 — resulted in a landslide loss. And Indiana is a deeply conservative state where the former governor, Mike Pence, backed a religious freedom law that critics said allowed discrimination against LGBTQ people, before retreating under pressure. But Buttigieg now has a national profile and donor network, and Anderson thinks one profound way he can advance the LGBTQ cause is by giving Indiana a gay governor.

“He actually, whether or not himself or insiders realize it, has a legitimate shot,” Anderson said. “He would be the most viable Hoosier to run.”

Are garages still open and doing MOTs during the coronavirus lockdown? – The Sun